Is This Quantum Eraser Video from Fermilab Incorrect?

In a video from Don Lincoln of Fermilab here, the following claim is made about a quantum eraser-type setup (about 2 min 50 sec in):

"If A & B are turned off, you see a wave pattern. That kind of makes sense."

This is accompanied by this image: 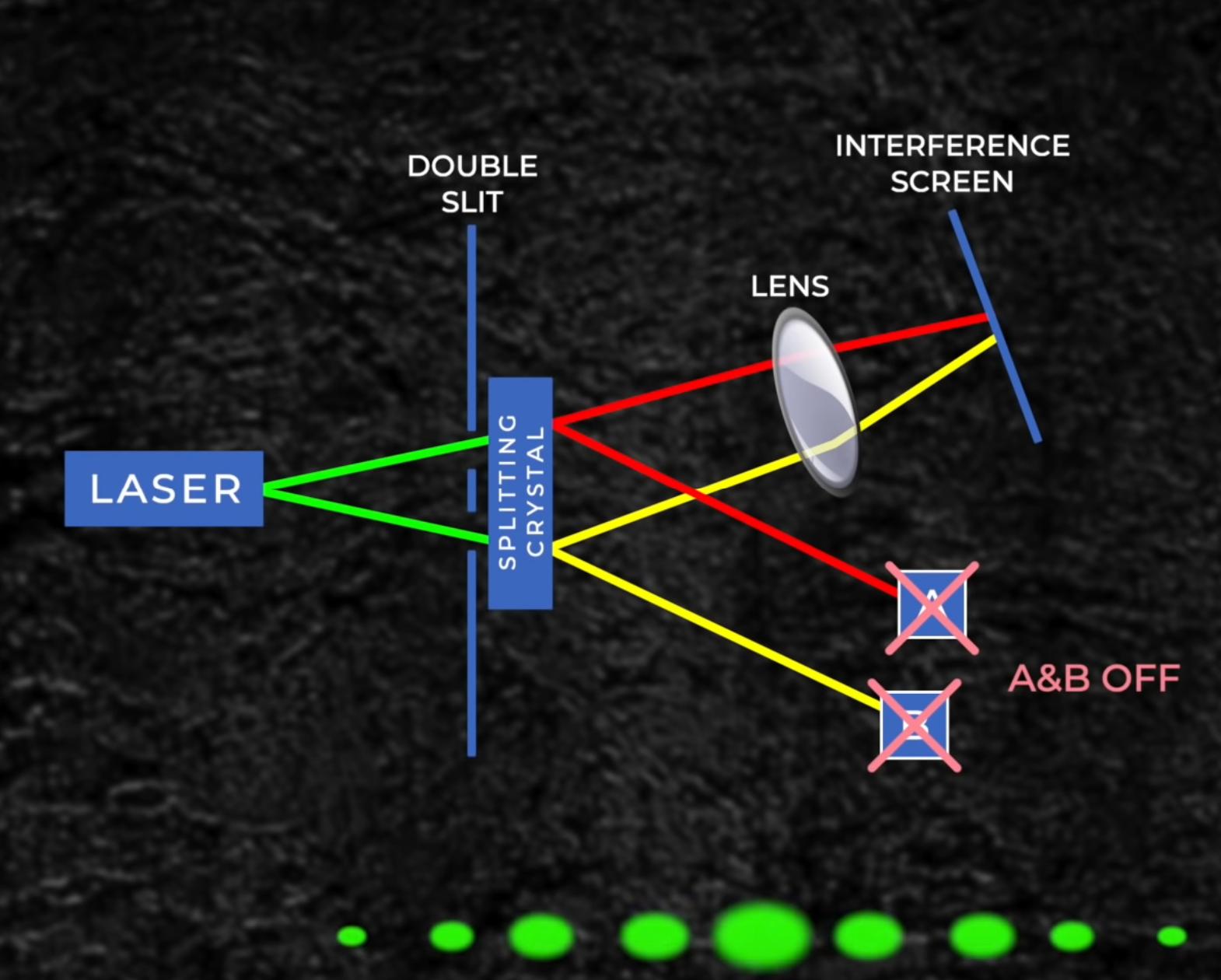 The narrator is saying that if a laser passes through a double slit into an SPDC crystal, and then one of the pair is sent to a detector that's off, you'll see an interference pattern built up one click at a time on the detection screen, of the kind you'd get in a regular double slit where you don't try to get which way information. (He goes on to say that this pattern disappears if you turn on the detectors.)

But most other things I'm seeing say that this isn't true: if you throw the photons away, you still don't see an interference pattern. Some examples from this website:

As well as Sabine Hossenfelder's video on the same subject here.

The latter explanations (particularly of the last Physics Stack Exchange link above) make sense to me. But the detectors being off as a method of "throwing away" the which-way information could also make sense to me. So, who's right?

You won't ever see an interference (or wave) pattern at the screen, as the bbo crystal, right after the slits, splits each photon into two entangled photons. As Sean Carroll says it: entanglement of any kind destroys interference. In this video I explain where the interference pattern actually comes from, and that there is no reason for retro causality: https://m.youtube.com/watch?v=e-uopGrghFQ

All the answers/statements/videos are correct, just subtle differences in the experimental setup or in what in particular is being asked can lead to the misunderstanding/confusion.

What Don Lincoln says is true, the patterns are being formed in his illustrated setup. Because he has 2 detectors off he is getting 2 patterns which happen to be complementary (property of the DCQE) to each other so in sum each pattern is not visible. The only way to observe the patterns is to do coincidence (also called correlated) detection which separates the patterns. BUT indeed the patterns are occurring!

The above is what Emilo is referring to when he says “an interference pattern will not appear”. A coherent measurement needs to be performed to see the 2 separate patterns, this measurement needs to be correlate (i.e coincident with the detector D0). So Emilo is correct, you need the detectors ON to see the patterns … the patterns are there but are superimposed and compliment to each other. Per Emilo answer/question, if the idler photons are flying away NO correlate measurements are possible.

Emilo has stated this twice in both your provided links, the patterns are NOT observed unless you do coincidence detection.

In the third link the proposed setup is different and the answer very long, I won’t go thru it.

Sabine explains the experiment well but she really focuses on the retro causality aspect, which she debunks.

Youtube is a competitive space, just be wary about statements like Sabine uses “super extra weird" and Don uses “mind blowing” …. all these experiments are well understood by many physicists …. but an air of mystery helps to get views and Youtube payments! Not to mention recruitment of naive physics students….

Note: I have not used the word interference (except in quoting Emilo), interference is a confusing term, it implies photons are interfering with each other... they DO NOT. Each photons finds a probable path per Dirac and Feynman.

Not the answer you're looking for? Browse other questions tagged quantum-mechanics quantum-entanglement interference measurements quantum-eraser or ask your own question.

8
Interference and which-path information
2
Does simply putting a photon-splitting crystal after a double slit break the interference pattern?
0
Quantum eraser without the quantum eraser
0
Delayed choice without detectors, and with lasers instead