Can the hydrogen Rydberg decay cascade be resolved into individual lines?

This is a technical question as a follow-up to the discussion in Would a high energy Hydrogen atom start emanating electromagnetic radiation?

Suppose that I have a hydrogen atom that is excited, at $t=0$, to a high-lying Rydberg state with principal quantum number $n\gg 1$ and maximal orbital angular momentum $\ell = n-1$. The subsequent dynamics are then clear: the atom will decay radiatively in a 'cascade' of dipole transitions, in a stepwise fashion with $\Delta n=\Delta \ell=1$ for each transition.

It was claimed in the previous discussion that the low spacing between neighbouring levels (which scales as ${\sim}1/n^3$) eventually produces a "smeared" emission that resembles the radiation continuum one would expect from a classical system.

However, this ignores the role of the natural linewidth of these transitions, which is well known and therefore produces an unambiguous answer. Can this decay cascade be resolved into individual lines once the natural linewidth is accounted for? (I'm happy to assume that all inhomogeneous and externally-induced broadening has been eliminated.) If it cannot be resolved for high-enough $n$, what's the lowest $n$ where the behaviour transitions from resolvable lines into a blended continuum?

And, as a harder follow-up: does the answer change if one choses a state with high $n$ but where $\ell$ is not high?

What I know for low-$\ell$ states is the following. The coupling to ground states (specifically the transition rate) scales as $n^{-3}$ in general. This effect comes from the radius increasing with $n$ while maintaining normalization.

If you're at 0 K, as your question suggests you're alright with, then the additional blackbody-induced transition rate scales as something like $n^{-5}$. So you can ignore it for high $n$, and the lifetime scales the same as the energy scaling. I only know the numbers for rubidium (which has a quantum defect of 2 or so for $\ell=0$), but the lifetime of hydrogen for a high-ish Rydberg state like $n=100$ should be milliseconds (a linewidth of kHz), while the energy spacing is likely to be GHz. This, with the scalings, means you can always resolve the spectrum.

If you're not at zero temperature, then actually the blackbody-induced transition rate still increases, but only as $n^{-2}$. So at some $n$ the two will converge.

I'm sure the quantitative answer will change for high-$\ell$ states, but I'm not so sure what the qualitative picture is because the level spacings change as do the relevant dipole matrix elements. I think this could actually be a harder question than the other one.

You could do the calculation for low-$\ell$ states pretty easily with a module like the Alkali Rydberg Calculator in Python. I've never tried to do it for high $\ell$ but I suspect it would only be slightly more complicated.

The decay probability from an upper state with principal quantum number $n$ to a lower state $m$ can for $n,m>>1$ be approximated by the formula

so for $\Delta n$=1, the transition probability for $(n\rightarrow n-1)$ transitions ($n\alpha$ transitions) is

This means that the line width of $n \alpha$ lines decreases actually sharply with increasing $n$, faster than the distance between lines decreases ($\propto 1/n^3$), so in the absence of collisional and Doppler broadening they should always be resolved (provided the instrumental resolution is good enough).

Whilst the above formulae does not show much variation with the angular momentum quantum number $l$, the population of levels with high $l$ decreases actually strongly for high quantum numbers as the recombination probability into these states decreases sharply with increasing $l$. For instance, recombination probability into $n=10, l=9$ is only about a factor $4\cdot 10^{-3}$ compared to $n=10, l=0$). This ratio gets even much less for larger $n$. It has to do with fact that the small number of nodes of the corresponding wave functions results in smaller overlap integrals when multiplied with the continuum wave function (which is essentially a sinusoidal function and thus tends to 'destroy' any slowly varying function when multiplied to it). Cascading will therefore be concentrated on small and medium $l$ values, and will therefore also have a higher probability of going directly into lower states (as per the above formula). But $n\alpha$ lines are observable and have indeed been observed for the best part of 50 years in astrophysics. Here the $H 157\alpha$ (1.6832 GHz) line profile emitted from the Orion nebula (after Pankonin (1980), p.121). 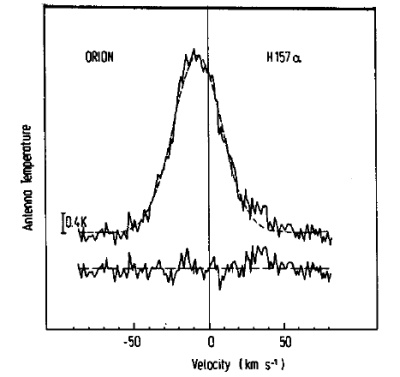 Of course, the lines will appear only as such as long as the both the density and temperature is sufficiently small to prevent the lines from blending into each other due to collisional and Doppler broadening. You can see this here in some theoretical calculations I made for my publication Scattering of Radio Waves by High Atomic Rydberg States some years ago (note that the text links to the figures in the PDF file are actually not clickable; all figures are at the end of the document). The first plot shows the scattering coefficient between a radar frequency $900-1000 MHz$ (corresponding to $n\alpha$ transitions with n around 190) for a plasma density $10^4 cm^{-3}$ 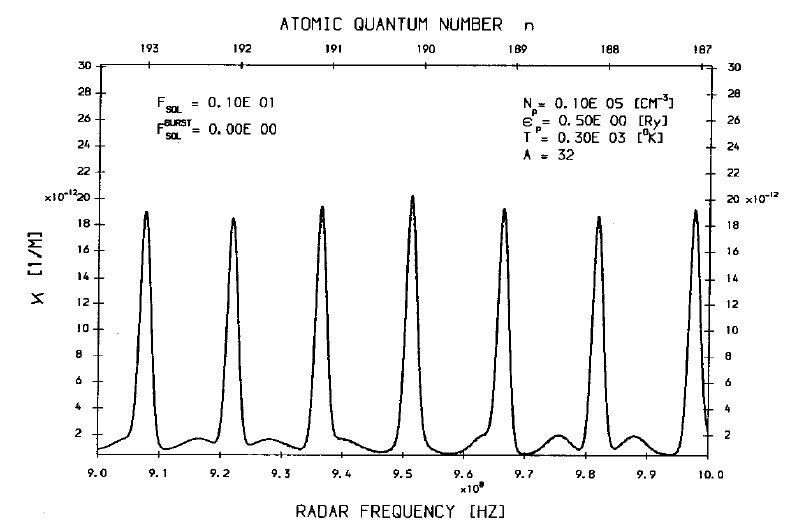 Here the lines are nicely resolved. But if we increase the plasma density to $10^5 cm^{-3}$ we get this 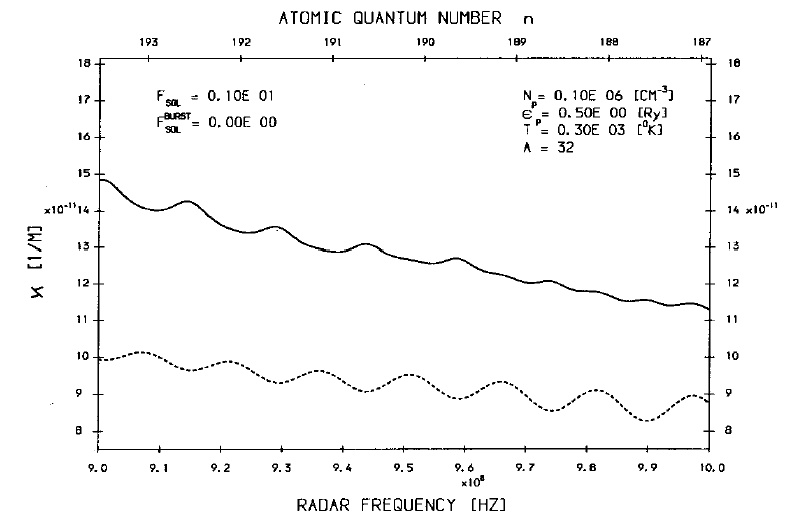 Here the lines have all but disappeared due to the collisional broadening.

And for a given density, going to lower frequencies (higher quantum numbers) will also make the spectrum continuous at some point. Here the whole frequency range from about 1 MHz to 2 GHz for a plasma density $10^4 cm^{-3}$ 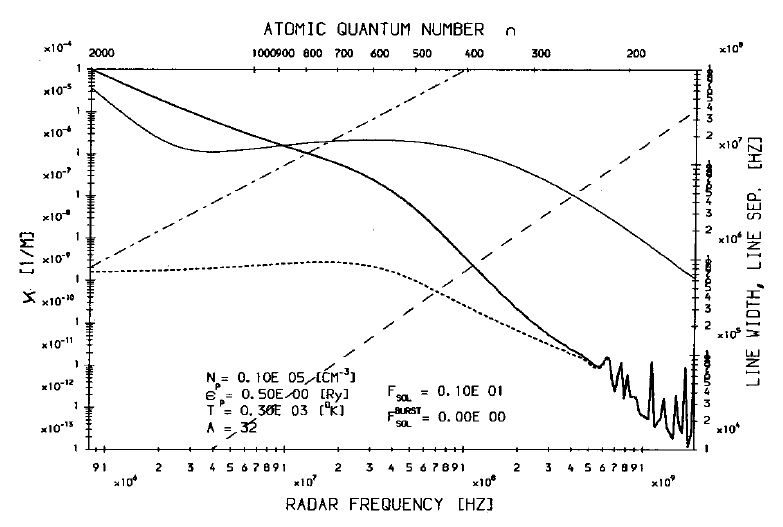 The spectrum (thick solid curve) becomes continuous here for frequencies below about 500 MHz (corresponding to $n>200$). For even smaller densities the transition point would shift further to the left, for higher densities to the right.

Great question, especially for Hydrogen where the structure is so simplified such the "nuclear mixing" effect is minimal.

There are still something unclear in your original question, but I will try to give a general answer to this problem.

Short answer, no, but very close. The leakage will contain decay into different $m$ states and get messed up since the further decay may contain similar frequencies but could be from different polarization etc and therefore no longer single mode.

However, there is a very easy fix to this problem: using $|m|=l$ as the initial state, aka circular Rydberg state. There is even a recent proposal to use such a state in Yb for quantum computing. Also, see this paper for the first experiment with the circular state ($|n=19,l=m=n-1\rangle$) in Lithium. You can see that at different times the ionization line is narrow, indicating a narrow state distribution, and if the detection is great you might observe stepwise decay with a shift in the decay line's frequency.

All the above discussions already take the natural linewidth into account. The Rydberg states intrinsically have very small linewidth decaying into the ground state due to the spatial overlapping being small. As you said the dominant process is decaying into the nearby Rydberg state, and the circular state, due to the angular momentum limitation, can only decay to the lower circular state.

Not the answer you're looking for? Browse other questions tagged quantum-mechanics atomic-physics rydberg-states or ask your own question.