Why is the concept of torque necessary?

In my physics textbook (“Physics for Scientists and Engineers” by Serway and Jewett) it says that “the cause of changes in the rotational motion of an object about some axis is measured by a quantity called torque.”

Why not use $F = m r \alpha$ to explain the change in an object’s rotational motion instead of torque?

The concept of torque is not necessary as such.

But it is useful.

When things are useful, someone might eventually start to use them. Then, sadly if you will, everyone else will have to understand them as well in order to follow what is being done.

In the case of torque, it is useful because it is a "rotational version" of force. You can't simply tell me that a force causes a rotation - I need more information than that to understand the resulting rotation since different forces can cause the same rotation and vice versa the same force can cause different rotations depending on where (distance from the rotational centre) and how (angle of the force) the force is applied. But if you told me the torque, then I understand exactly how the resulting rotation turns out. Only one torque can cause a specific rotation (a specific rotational, angular, acceleration). Torque is a measure that takes into account both force magnitude, force angle and distance so that all the confusingly varying parameters are accounted for.

So, unfortunately if you will, torque as a concept and property is here to stay. And quite useful to get the hang of if you ask me.

In principle you could always use force and not use torque. But, the use of torque greatly simplifies the analysis of the motion of a system of particles.

For example, for rotation of a rigid body about a fixed axis the rotational motion is simply described as $\tau = I \alpha$ where $\tau$ is the net torque, $I$ is the moment of inertia, and $\alpha$ is the angular acceleration.

One big reason for using torque is that it creates a simple way of understanding when an object is in equilibrium.

When the sum of the FORCES on an object is zero, then we know that the object does not have translational acceleration.

Similarly, when the sum of the TORQUES on an object is zero, then we know that the object has no rotational acceleration.

If I understand correctly, the crux of your question is:

Why not use $F = mr\alpha$ to explain the change in an object’s rotational motion instead of torque?

There are a few reasons, but the first good reason is that the $r$ in $\tau = Fr$ and the $r$ in $mr^2\alpha$ are not always the same $r$! For example, consider this pendulum, shown in the figure below, whose mass is mostly concentrated at the point $r_1$ from the pin (the point about which the pendulum rotates). A real-world example would be a carbon fiber pendulum rod with a lead ball embedded in the middle. Lead has a significantly higher density than carbon fiber, so we may sometimes be able to discount the inertia of the rod and only consider the inertia of the lead ball. 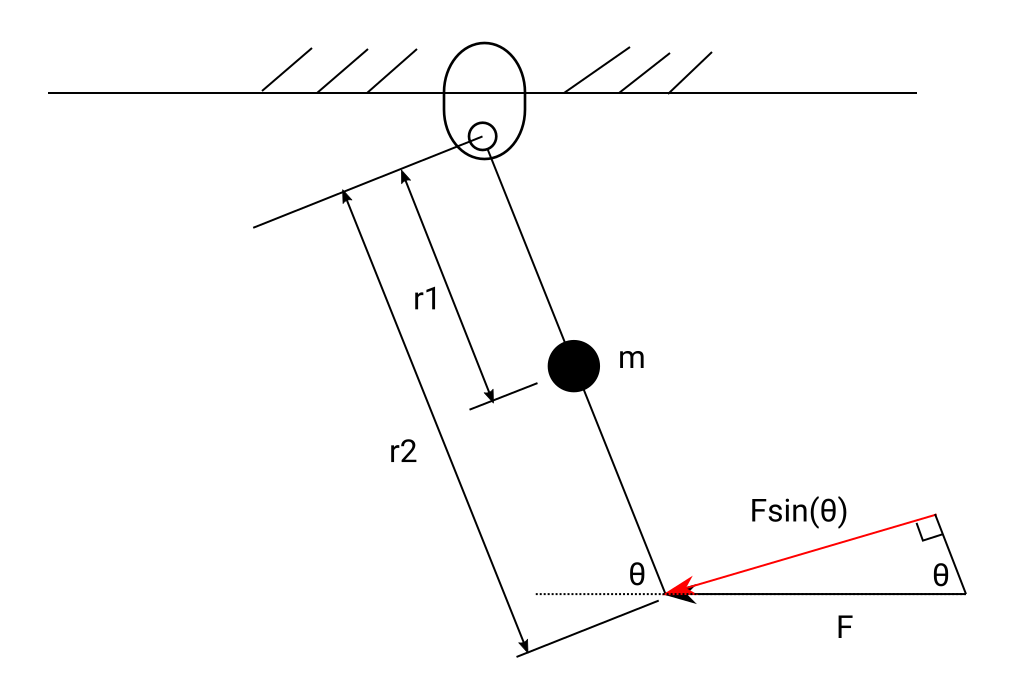 Why not use F = m r α to explain the change in an object’s rotational motion instead of torque?

There are three major conserved mechanical quantities: energy, momentum, and angular momentum. Each of them are separate quantities and they are separately conserved. Because they are conserved, we are interested in the rate of transfer of each of them.

Force is the rate of change of momentum.

Power is the rate of change of energy.

Torque is the rate of change of angular momentum.

These are distinct quantities. If you wish to calculate the change in angular momentum then you must use torque, neither force nor power will provide that information. It is also important to know that it is possible to have a torque without a net force, a force without a power, and so forth.

Because from $F = m r \alpha$, it can be seen that for knowing what magnitude of force was applied to a rotating object with given angular acceleration - you have to know distance $\vec r$ vector, i.e. position where this force was applied. And in the second (linear) Newton law, force does not depend on distance. So it must be that angular acceleration has nothing to do with force alone.

The second point is that, as you noted yourself, when multiplying both sides of equation by $r$, we get:

But ... $mr^2 = I$ is nothing more but a moment of inertia of rotating point about a given axis. So you assume that all given angular rotating systems will be point-like, which is not always the case. In general, a system can have an arbitrary moment of inertia. You can check some at common list of moments of inertia. So in the end, your equation becomes:

Consider a stiff but massless bar with a frictionless axle at one end. A mass (m) is mounted on the bar at a radius (r) from the axle and a force (F) pushes on the bar at a radius (R). The work done by the tangential component of the force pushing the bar through an arc length (S) will be transferred by the bar, accelerating the mass through an arc length (s): $F_t$S = mas or $F_t$Rθ = m(rα)(rθ) where θ is the angle of rotation of the bar. dividing both sides by θ gives τ = (m$r^2$)α. This logic can be applied to any number of forces and masses. Note that the radius to the force can be different from the radius to the mass. The sum of torques tries to cause an angular acceleration, and the sum of terms (m$r^2$) (the rotational inertia) opposes that acceleration. This approch gives you the best definition of a torque: A torque is the work per unit angle of rotation (as in Joules per radian) that can be done by a force which is acting in a manner which would tend to cause a rotation.

The concept of torque is not merely "necessary". It simply is. Torque is axiomatic, in the same way as "left" and "up" or "beneath" and "more than."

Argue all night about the specific words used in any given language and still, how could "necessary" come into this, any more than it does for other basic concepts such as breadth or height, length or weight or volume?

Not the answer you're looking for? Browse other questions tagged newtonian-mechanics forces rotational-dynamics reference-frames torque or ask your own question.

16
Is angular momentum just a convenience?
0
Are Newton's Laws applicable to torque too?

1
Rolling ball which slips
0
Coordinate System vs. Angular Properties vs. Centroid
10
Non-constant angular velocity in orbit
0
A query on the solution of a gyroscope with friction
0
How is the torque about any two reference points (in the system) when a body is in translational equilibrium of same value?
3
Intuition behind torque, rotational inertia and angular momentum
0
Is it possible in principle, to analyze problems in rotational mechanics using force and mass, instead of torque and the moment of inertia?