We often calculate the velocity of a boat moving upstream as the (velocity of boat in still water$-$velocity of stream), and add them for downstream. My teacher told me that it's "net velocity" of a body, but can someone prove mathematically that net velocity is the sum of all the velocities acting on the body? I get it intuitively but I want to know the maths clearly behind arriving at such a conclusion.

What you are dealing with here is typically called relative velocity. Honestly, I've never heard the term net velocity before and it's doesn't seem right to talk about several velocities "acting" on an object.

Rather, an object has just one single velocity. We can talk about its velocity vector components if we will, but that's all.

Relative velocity in a non-relativistic sense (for not-too-high speed) is simply the velocity as seen from different frames and is simply the difference. You consider the speed of some other object and then subtract your own speed "away".

Because all positions, velocities, and speeds are relative (i.e., there is no absolute frame that we know about), we need a structured approach for describing these quantities. We can use vectors to describe these quantities. Without getting into formal linear algebra, let's first consider positions. 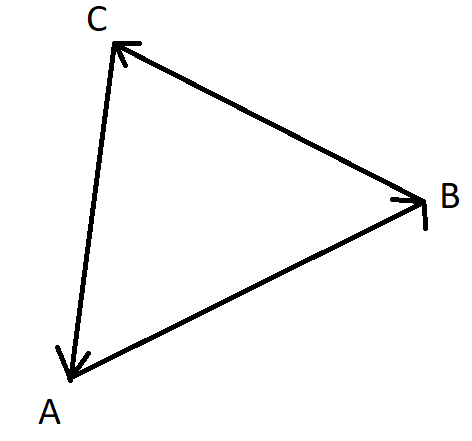 This figure shows 3 points in a Cartesian geometry and the arrows connecting them represent relative position vectors. The arrow pointing toward B from A is the position of B relative to A and in notation we will call it $\vec{r}_{BA}$. The other two arrows/vectors would be $\vec{r}_{CB}$ and $\vec{r}_{AC}$.

We apply this to your problem by saying A is the boat, B is the observer on the shore, and C is the water:

The concept of velocity depends on the observer. If you are on the river shore and you see someone on a boat rowing upstream with the tempo that would result in, for example 3 m/s on a still lake, and if the river flows with the velocity of 2 m/s, then it's logical that you will perceive that the boat will move with the velocity of 1 m/s. However, if you're in the boat, the boat seems stationary to you, and the observer on the shore is the one that you perceive is moving (the whole shoreline is moving from that perspective actually). So to iterate, this net velocity you are interested in depends on the observer.

I agree with you that this is not clear. It rests on the idea that the law of physics applicable here (Newtonian mechanics, fluid mechanics) are Galilean invariant. Which they are. So you just transfer to the rest frame of the stream, have your boat speed there and then transfer back.

One can see that this assumption is really made, since it does not follow for relativistic situations.

I'm answering my own question as I think I came up right with this:

We observe this as the final velocity as the time interval between the boat covering distance $d_b$ and then moving back by $d_s$ is $0$, i.e., the "moving forward" and "coming back" occurs simultaneously and what we observe is the final displacement divided by time taken.

Suppose we have a series of buoys floating in the water, each one meter downstream from the last (we'll pretend that the current is stable enough that they stay the same relative position from each other). Suppose at 0 sec the boat is at buoy0, and both are assigned the x coordinate 0m. At 1 sec the boat is at buoy5. So relative to the water, the boat is travelling 5m/s. At time 0 sec, buoy5 was at x = 5m. If the river current is 1m/s, then at time 1 sec, buoy5 is at x = 6m. So the boat travelled 6m in 1s, for a velocity of 6m/s, which is equal to the current velocity plus the velocity of the boat relative to the water.

To some extent, "relative velocity" is, by definition, total velocity minus the velocity of the thing it's relative to, so it follows that total velocity is relative velocity plus the velocity of the thing it's relative to. One way of thinking about a position vector is that it's the displacement vector between the origin and the point being considered. That is, given a point $A$, $\vec A= A-O$ (in mathematical terms, a vector space can be defined from an affine space by picking an origin point). Note that $A$ and $O$ are actual points, while $\vec A$ is a position vector. If we want to find a velocity, it doesn't matter what point we choose as the origin, as long as it's consistent, because velocity is calculated in terms of difference in position vectors. $\vec v = (\vec p_f - \vec p_i)/(t_f-t_i)$ and $\vec p_f - \vec p_i = (P_f-O)-(P_i-O)=P_f-P_i$, so $O$ cancels out. If, however, we are measuring the position relative to the current, then the origin point is moving with the current, so we have two different $O$, so we have $(P_f-O_f)-(P_i-O_i)=(P_f-P_i)-(O_f-O_i)$

There is no mathematical "proof" i think why the net velocity has to be the vector sum of the individual velocities. It might well not be. For everyday situations, we observe that this is generally what happens in the real world. However, when the speed gets much higher (closer to the speed of light), then vector addition of velocities turn out to be false. So this is really a physics theory problem, and cannot be proved by mathemetics.

In other words, you can't hope to prove this relationship because it's a fundamental assumption. As physicists later learned, it's an assumption that doesn't even agree with observation. It turns out that physics is actually (locally) invariant under the action of the Poincare group. The situation is much more complicated here. Instead of simple vector addition, we can find that two boosts compose to give us a boost plus a rotation.

Not the answer you're looking for? Browse other questions tagged homework-and-exercises forces kinematics velocity or ask your own question.

3
Understanding rotational motion on a rough surface
15
If the strong nuclear force is stronger than electrostatic repulsion, why don't nuclei collapse into a point?
4
Is there a point in the universe where I will be hanged forever?
0
Galilean Relativity: Clarification
1
Understanding the meaning of mass in Newtonian mechanics
0
Why can internal forces be disregarded considering the motion of the center of mass of the system?
3
What is the physical interpretation of imaginary lengths?
0
Is this book correct?
3
How do we account for the non-net accelerations for forces in static systems?