If we raise the temperature of any conductor the atom, free electrons starts vibrating There kinetic energy increases

If kinetic energy increase then , Current must be increase As current increase resistance must decrease

If kinetic energy increase then the current must be increase . . . . is not true.

You can think of the free (mobile) electrons as having two types of motion.
A random component due to their thermal energy and a directed component, often called the drift velocity, produced by the electric field and hence the flow of charges (current).

Here is a graph of current against time after a light bulb is switched on. 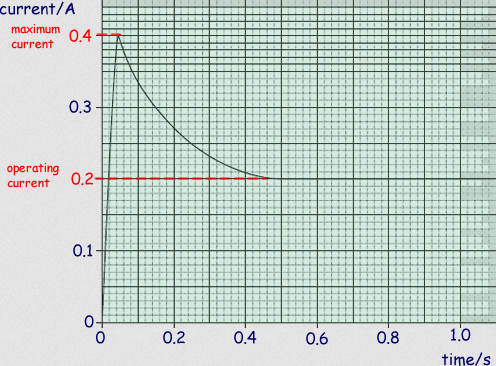 Note the initial rise in the current when the bulb is filament is cold (low resistance) and then the lowering of the current due to the increase in resistance as the bulb heats up.

Not the answer you're looking for? Browse other questions tagged thermodynamics electric-circuits electrical-resistance conductors or ask your own question.

0
Resistance & temperature of semiconductor
3
How does the drift velocity of electrons in a conductor depend on the temperature?
2
Semiconductors vs. Metals Conductivity at High Temperatures
2
Why in a conductor increase in temperature makes the atoms vibrate but in a semiconductor the kinetic energy of the free electrons is increased?
1
How does an increase in potential difference increase the resistance of a non-Ohmic conductor?
0
Relationship between Electric Fields, Potential Difference and Resistance in Circuits
0
Doubt regarding concept of current electricity