Ask Question
Asked 1 month ago
Active 1 month ago
Viewed 75 times
2
$\begingroup$
Homework-like questions and check-my-work questions are considered off-topic here, particularly when asking about specific computations instead of underlying physics concepts. Homework questions can be on-topic when they are useful to a broader audience. Note that answers to homework questions with complete solutions may be deleted!

A block is tied to a string wound on a cylinder of mass $m$ and radius $r$, (Through a pulley) which can rotate about its axis on a massless mount placed on a smooth surface.
The system is released from rest, what will be the velocity $v_1$ of the block after it falls by a height $h$?
$\hskip2in$ 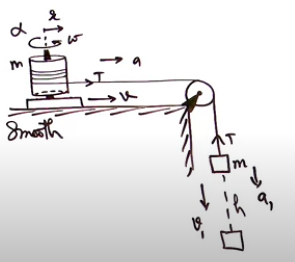 I was able to do the problem after creating the Newton's 2nd law equations. I also want to solve this using the work energy theorem. Here's what the equation I ended up with:

As the string would also be moving with velocity $v_1$ as it's directly connected with the block, and the point where it's wound over the cylinder would have the translational velocity $v$ and rotational velocity $\omega r$ this gives us the relation:

$$v_1=v+\omega r$$
This relation isn't enough to get the value of $v_1$ What other kind of motion should I focus on to get another relation? Would be great if someone could hint me what am I missing.

For the cylinder system, as the Tension is the only force causing the acceleration of the cylinder, $$T=ma-(2)$$

Also, the rotational equation for the cylinder (Net torque = $I\alpha$, where $I$ is the moment of inertia and $\alpha$ is the angular acceleration):

Thanks to BioPhysicist for the hint. I decided to complete my answer now,

As mentioned in the post, the work energy equation we get is:

Also, as mentioned in the post (Equation 5) we have:

Using Newton's speed equations, as the system was released from rest, initial velocity u=0.

For the cylinder, it attained velocity $v$ in time $t$ with acceleration $a$

We also already have the constrained relation between the velocities (Mentioned in the post),
$$v_1=v+\omega r \space -(3)$$

So this question cannot be solved using conservation of energy alone. To explain this note that the system has two degrees of freedom. We can choose the independent generalized coordinates of this system as $\theta$ (rotation angle of the cylinder) and $h$ (displacement of the block). The configuration of the system is completely specified if $(h,\theta)$ is known. Now the conservation of total energy is just a single equation and it is a function of $\dot\theta, \dot h$ and $h$. The job is to determine $\dot h$ given $h$. For this we need to find a relationship between $\dot\theta$ and either of $h$ or $\dot h$ or both.

Since our system is described by independent generalized coordinates no further off-shell constraint between them can be found. Any constraint will be on-shell in origin. This can be obtained by considering the Lagrangian of the system. $$\begin{aligned}L&=T-V \\&=\frac{1}{2}I\dot\theta^2+\frac{1}{2}m(\dot h-r\dot\theta)^2+\frac{1}{2}m\dot h^2-(-mgh) \end{aligned}$$ For this system we can use conservation of energy (an on-shell constraint) since the Lagrangian is time independent ($\frac{\partial L}{\partial t}=0$).
Now note that $\theta$ is a cyclic coordinate and thus it's conjugate momentum is conserved. This serves as our second on-shell constraint that will enable us to solve the problem. $$\begin{align}p_{\theta}=\frac{\partial L}{\partial \dot\theta}&=constant \\\Rightarrow\quad I\dot\theta+m(\dot h-r\dot\theta)(-r)&=constant \end{align}$$ Since at $t=0$ the left hand side is zero we must have $constant=0$. Thus we obtain our other constraint. $$I\dot\theta-mr\dot h+mr^2\dot\theta=0$$ Converting to the original notation $\dot h=v_1$ and $\dot\theta=\omega$ we get the other relationship. $$\omega=\frac{mrv_1}{I+mr^2}=\frac{2}3\frac{v_1}r$$ Substituting this into the energy equation and solving for $v_1$ gives the expected answer.

Not the answer you're looking for? Browse other questions tagged homework-and-exercises newtonian-mechanics rotational-dynamics energy-conservation string or ask your own question.

2
Calculating Rotational Inertia Using Parallel Axis Theorem
2
The work-energy theorem
1
Finding minimal velocity for which block can travel to the end of the plank
1
Using Work Energy theorem to find acceleration
1
What's wrong in my approach towards solving this problem?
2
How to solve this problem only using the kinematics of rotational motion?
0
How do we interpret pulleys with mass in pulley problems?