Can two standing waves combine to form a traveling wave?

Two traveling waves with equal and opposite wave-vectors form a standing wave, which is easy to prove.

But what about combining two standing waves?

Can we derive the velocity of the wave/disturbance created by combining two standing waves?

Does this result in a traveling wave? If so, what is its wave-vector and velocity?

To see this we could look at the amplitude of the resultant wave. That is obtained by adding the amplitudes of the standing waves at each point. 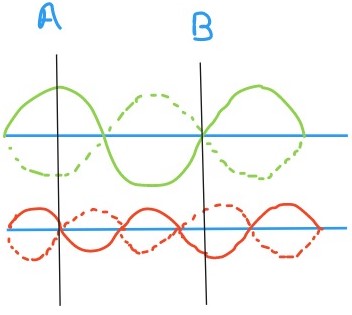 That would mean that the amplitude at $A$ was greater than that at $B$, so unless there were some very particular conditions met (perhaps as in RoderickLee's comment), then the traveling wave wouldn't occur.

7
Deriving group velocity
4
how to add two plane waves if they are propagating in different direction?
1
Physical meaning of non differentiatiability of $y(t)$ at a point of an elastic medium
3
Traveling wave solutions for an irregular "waveguide"
0
Interference of two wave