Indeed, the latter. What you measure is actually not a pure projection operator $|x\rangle \langle x|$ but something more smudged like $M_x = \int dy \, p_y |y\rangle \langle y|$. Further general measurements need not be matrices, they need to be linear operators, the most general physical form of which are completely positive maps.

This means there is some probability that your measurement assigned value $x$ to the position of an object which was actually at a different location. Operators of this form will not in general collapse the wavefunction into a point. But if you are not careful the information you did not collect will be erased by interaction with the environment, which can make your system nearly classical.

The concept of "collapse" is a misleading one. Objects which are in the dimensional range of quantum mechanics do not "collapse" like pricked deflated balloons.

Observation means any interaction a particle described by a wavefunction might have. The square of the wavefunction will tell us what the probability is to observe the particle at a specific (x,y,z,t). Elementary particles are considered as point particles and in that sense when they appear at a specific point they are a point.

But quantum mechanics describes also complex objects like molecules and crystals and even superconductors. Measurements on these objects follow the probability distributions of the complex interactions but the collective measurements will also reveal the size of atoms or molecules. A single scatter on an atom of a crystal will give a specific (x,y,z,t) point for it but a large statistical accumulation of scatterings will give a size for it which is within our measurement accuracies.

For example these nanotechnology atom arrangements: 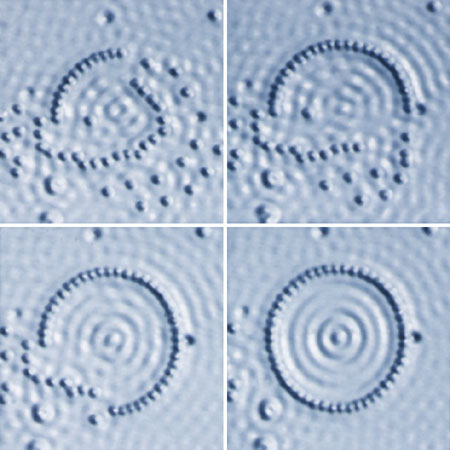 There are a large number of photons scattering off the atoms, each sampling the probability distribution that describes them, and they are within our measurement capacity.

As said by anna v, the "wave function" is not at all a real space-time wave function, it is only a probability amplitude, that is complex numbers which allow us to calculate probabilities.

From my point of view, a way to understand these $\Psi_i$ is to see them as initial conditions.

To see a classical analogy, when you throw a ball against a wall, the initial conditions before and after the bouncing are not the same.

It is the same here, staying in the Heisenberg representation, after the measurement, there are new "initial conditions" $\Psi'_i$.

However, within the framework of CI, there are some constraints required for consistency. It's not possible for any measurement of position to be exact. If it were, then the collapsed wavefunction would be a delta function in position space, which corresponds to an infinite sine wave in momentum space. But an infinite sine wave isn't normalizable, so it isn't a physically possible wavefunction.

Not the answer you're looking for? Browse other questions tagged quantum-mechanics wavefunction-collapse or ask your own question.

1
Regarding state of Klein-Gordon field