Why can't water flow fast when the impact speeds up? (the incompressibility)

In the text below, the liquid is said to be destructive and incompressible. And he says, "I the flowing takes time, and if your speed of impact is too great, the water won’t be able to flow away fast enough, and so it pushes back at you." I don't know what this sentence means. Why can't water flow fast when the impact speeds up? Is this problem related to 'momentum & impulse'?

(The answer to this question I thought was, "Because of the incompressibility of the water, the impulse time is shortened and the force to receive increases.") 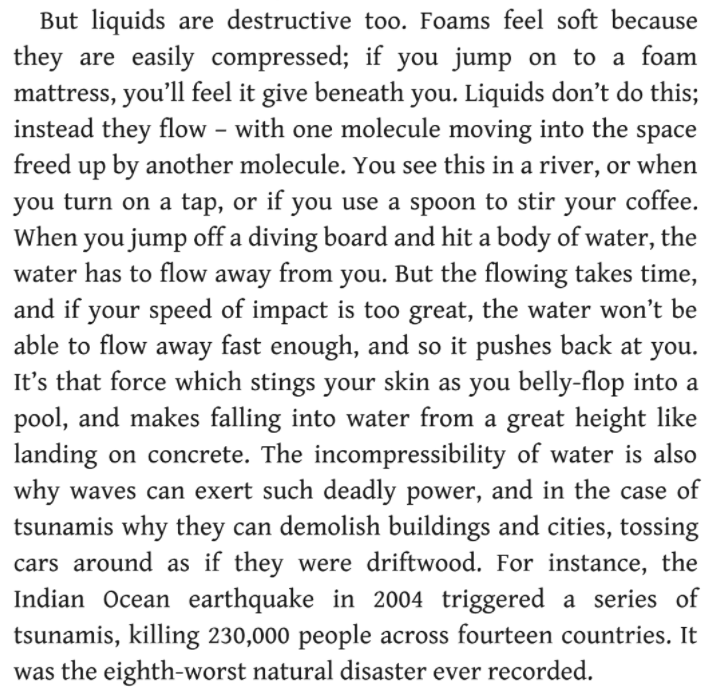 So if you increase your impact speed, the greater the water will impact you. This applies to all objects with mass. Whilst water is not easy to compress, the major reason why the larger a force that is applied to a body of water, the larger it's reaction force will be, is due mainly to the fact that is has mass and therefore inertia.

The viscosity of the fluid actually determines if the fluid could flow "fast enough" or not.

Viscosity,$\mu$, is a property of fluid determined by the ratio of shear stress and velocity gradient: \begin{equation} \tau(\mathbf{u})=\mu\nabla\mathbf{u} \end{equation} which is just the shear stress version of the familiar pressure, except the force is now parallel to the surface rather than perpendicular.

We can see that given a fixed shear stress, the acceleration,$\nabla\mathbf{u}$, decreases if the viscosity increases, meaning the fluid would not be able to flow "fast enough" if a large enough viscosity is given. Imagine something with super high viscosity, say, tar road. Punching tar road is more painful than punching a body of water because that tar can't deform "fast enough" and hence the impulse of your punch is very high, and hence the reaction of your force during the process of your "punching" is high as well.

To prove that the impulse of your punch is very high, imagine now that you are a perfectly spherical ball with a brain and nervous system and all that, and someone throw you into a pool of water for some reason. Stokes derived from the definition of the shear stress and told us that the reaction force(we usually call it the drag force) that you will experience is actually: \begin{equation} F_d=6\pi\mu r\mathbf{u} \end{equation} where r is the radius of the ball.

We see that if $\mu$ is high, the impulse is high, and vice versa. That's why punching tar road hurt much more than punching a body of water. So yes, it's related to impulse and momentum. And it's not that water can't flow fast when the impact speeds up(well, that is to assume that water is a perfect Newtonian liquid, but that's another story), but that impact is large when the fluid can't flow fast.

Inertia is part of the answer, yes. But inertia is caused only by gravity, whereas drag force actually takes the electromagnetic property of the material into account.

Not the answer you're looking for? Browse other questions tagged fluid-dynamics water flow density viscosity or ask your own question.

6
Does something like Pascal's Law apply in a Swimming Pool? If not, how does pressure spread?
6
How does water pressure manifest itself on the molecular level?
1
How the flow is distributed when the water flow from one river/drain to multiple rivers/drains?
4
Strange behavior of water flow
2
Why do hose pipes move when water is flowing?
21
Why does the tip of an elastic water tube flap when the flow is fast?