What is the resulting orbit of objects launched from the ISS?

Two identical masses are launched from ISS at 10 meters per second, one towards the earth and one away. Since their orbital velocity vector has changed by the same magnitude would they have the same elliptical orbit with the apogee of one occurring at the perigee of the other?

Let's assume the ISS is in an ideal circular orbit, with no air drag. To keep things simple, I'll use units where the orbital radius of the ISS is 1. Let $v_0$ be its orbital speed. We launch the masses with a speed of $w$ directly towards or away from the Earth, so we can use Pythagoras to find the resulting velocity $v$. 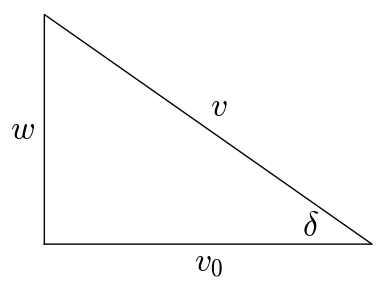 The polar equation of an ellipse with a focus at the origin, aligned with the horizontal axis is $$r=\frac p{1+e\cos\theta}$$

And the tangent of the angle between that tangent line and a perpendicular to a radial line passing through that point is $$\tan\delta=\frac{-e\sin\theta}{1+e\cos\theta}$$ At the launch point, this is the same $\delta$ as in the above diagram.

Incidentally, at any point on the orbit, the speed is given by the vis-viva equation, which is a consequence of the invariance of the orbital energy.

where $\mu=GM$ is the sum of the standard gravitational parameters of the central body & the orbiting body (it's common to omit the orbiting body's mass because it's so small relative to the primary's). 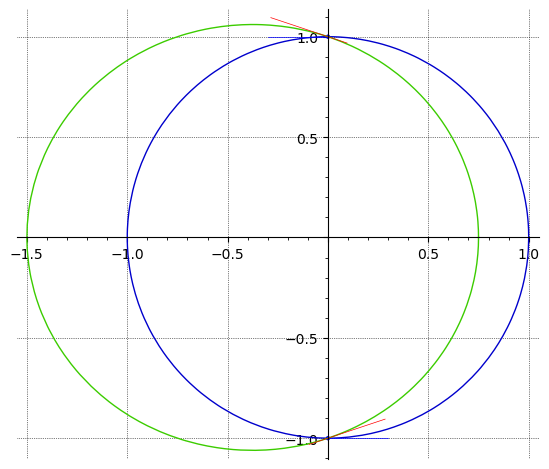 Here's the Python / Sage script which produced that diagram. You can give it any eccentricity between $-1$ and $1$. The script can render the diagram in PNG or SVG format. It also prints $a$, $v/v_0$, and $\delta$.

The two elliptical orbits will have the same semi-major axis, which is even identical to that of the ISS orbit, and will the same eccentricity (A transverse accerleration does not change orbital energy and thus the semi-major axis is retained). The only difference being that for the mass going outside the true anomaly of the elliptical orbit just after launch is 90°, while for the mass going inside it is -90°.

Not the answer you're looking for? Browse other questions tagged newtonian-mechanics newtonian-gravity orbital-motion satellites or ask your own question.

2
What are the steps and energetic requirements for getting from the HST to the ISS?
3
How can you calculate the tidal gradient for an orbit?
1
Clearing up confusion about orbital mechanics
0
Why aren't orbits transferred at the perigee?
0
Increasing the speed of satellite to raise an orbit
1
The accelerate from an elliptical orbit to a circular orbit
0
Why is the JWST orbit only taking 30 days?