How is linear momentum conserved in a cooling gas?

Consider a closed cylindrical tank with no external forces acting on it which is filled with gas which is cooling due to radiative heat loss to the surroundings. Consider a smaller tank at a higher pressure fixed within this tank, which releases a blast of gas inside the larger tank from one end of the cylinder towards the other. The impulse from the blast imparts momentum to the tanks. Conservation of momentum tells me that the total momentum getting transferred molecule to molecule by the resulting pressure wave as it travels the length of the cylinder from one end of the cylinder to the other must be independent of gas temperature and pressure, such that the axial momentum of the tanks is exactly cancelled when the wave is done bouncing around inside (with the velocity of the CG of the tank-gas system remaining constant).

During the time it takes the wave to travel the length of the tank the average velocities of all the gas molecules have decreased, due to decrease in temperature. I assume that the localized density at the wave front must compensate for the loss of molecular velocity such that exactly 100% of the axial component of momentum is transferred back into the tank, but this does not seem obvious given that all the molecular velocities are lower than at the start, and that the degree to which they are lower is not tied to the energy or momentum of of the initial blast since it is just a function of the rate of heat transfer to the surroundings. How is the axial component of momentum conserved when the molecular velocities have all decreased since the initial impulse?

Edited for brevity and to add basic conceptual diagram: 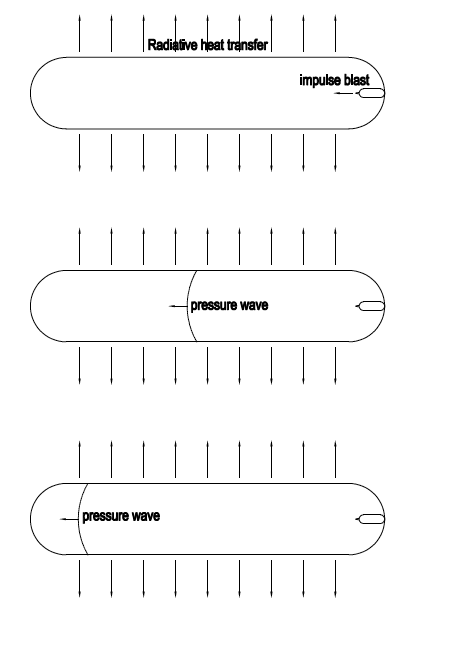 Browse other questions tagged statistical-mechanics momentum conservation-laws gas or ask your own question.