I'm not sure whether my understanding of frictional forces is incomplete or I'm neglecting some forces... Here's a top view of a tire (car) that is spinning on a straight road (For this question, I'm neglecting air drag): 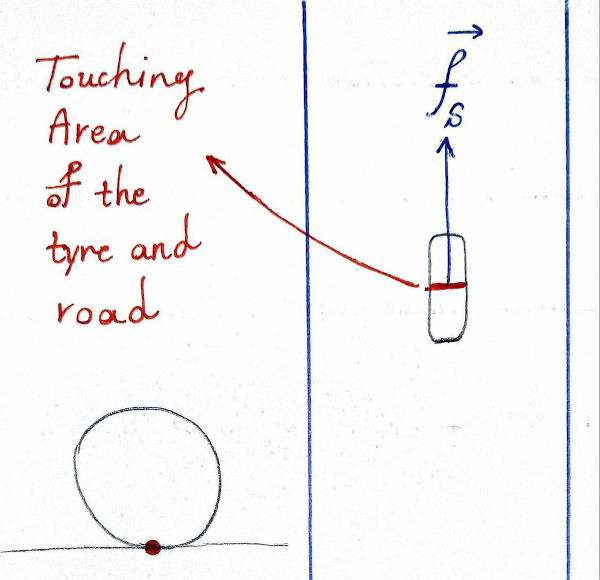 The red line is the touching area of the tire and the road. I understand that since the tire has no relative motion with respect to the road (i.e. the tire is not slipping), there should be a static friction there (the tire pushes the road back, and by Newton's third law, the road pushes the tire forward and make the car move).

But when the car is moving in uniform circular motion, the tire is actually slipping (or else the tire would not change direction, and thus keep going on a straight line), and this makes kinetic friction: 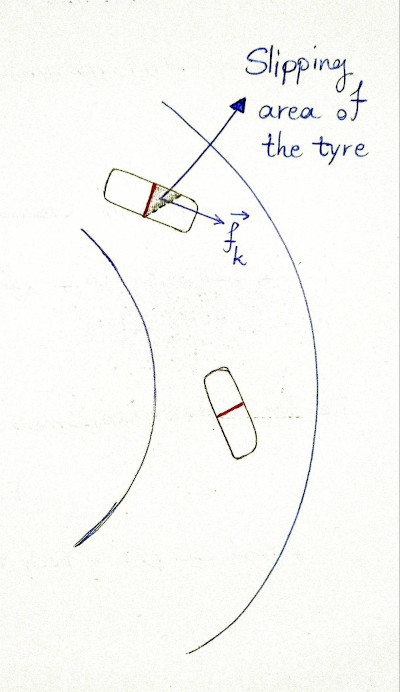 In uniform circular motion, there is a acceleration toward the center of the arc, and thus a net horizontal force toward center. I've read in books that friction is causing this, but then I thought if kinetic friction is pushing the tire back, then it cannot be the only source of the centripetal force. Therefore, there should also be a static friction pushing the tire forward as it spins. But as far as I could imagine, the only point that doesn't slip as the tire spins, is the edge of the tire which perhaps makes static friction when the tire is spinning: 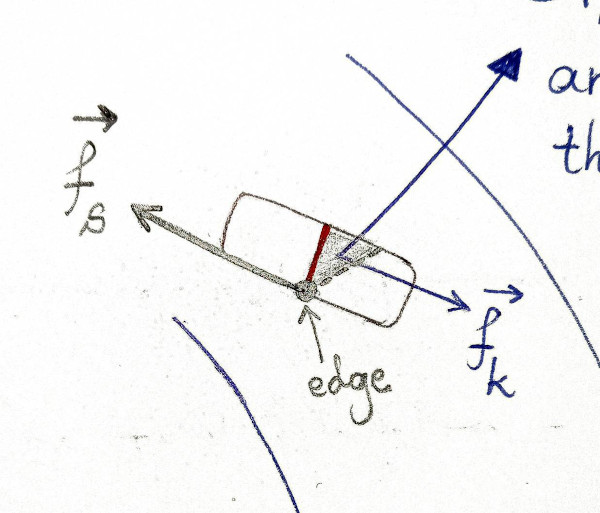 This is what I could come up with... Now my questions are:

From the answers below, I could derive a conclusion that answers my doubts (I'm taking the tire to be ideal and not deform, also ignoring the kinetic friction as @BowlOfRed suggested):

the tire is actually slipping (or else the tire would not change direction, and thus keep going on a straight line), and this makes kinetic friction:

While this is true, it is only a very small effect. It is in fact possible for the tire to deform instead of slip, so that there is no kinetic friction. In the analysis of what is happening, it is not a bad simplification to assume the wheel is not slipping and all the interaction is static friction.

In uniform circular motion, there is a acceleration toward the center of the arc, and thus a net horizontal force toward center. Correct.

Therefore, there should also be a static friction pushing the tire forward as it spins.

Don't worry about "forward" and "backward" on the tire. Those would change the speed of the vehicle and we're not worried about that. We just want to consider the forces parallel to the axle.

Generally for questions about circular motion (where we're not trying to model how a real tire tread slips and deforms), we just model it completely as static friction. If the vehicle is coasting, (zero torque on the axle), then the wheel can generate almost zero forces in the direction of spin. Any forces there would just cause the wheel to spin faster or slower.

As the car turns, static friction is the significant force. Consideration of the tire slip isn't necessary to understand the overall motion.

how is the tire pushing the road, to be pushed back toward center?

Let's imagine that your foot is hard on the brake, so the wheel can't turn at all. In this case it will be kinetic friction, but again, don't worry about that too much. As the wheel skids, friction arises in the direction opposite motion (regardless of the wheel orientation).

why isn't it being pushed forward like in the case of a straight road?

That has nothing to do with the road or the angle. That has to do with the engine delivering torque to the axle. This entire problem I've explicitly said we're ignoring torque from the engine. Cars can roll forward, but they're not "pushed" unless you have an engine and that's not part of what makes a car turn.

For now, pretend no engine, no brake. Your speed doesn't change, you just coast, but you can still turn.

The physics of a car tyre are quite complicated if you consider them in detail. Some points you need to bear in mind are as follows:

You have to remember that a car tyre is not rigid- it deforms under load. If you imagine rolling a cylinder along level ground, it will follow a straight path. If you roll a section of a cone, by contrast, it will roll in a circle. A car tyre can deform so that its radius of curvature varies across its width- like a section of a cone- so its natural direction of motion need no longer be a straight line. Cars are also equipped with differential gears which allow the inner wheel on a turn to rotate at a slower rate than the outer wheel, which again encourages a curved motion. Finally, a car has more than one wheel, so you have to take the interaction between all the wheels into account if you want to understand the forces at play.

Taking all that into account, you can now probably imagine that when a car takes a bend, several factors cause it to follow a curved path. The dominant one is the fact that there is very little friction in the bearing of the wheels, so it is very easy for a wheel to roll in a direction perpendicular to the direction of its axle, and hard for it to skid parallel to the direction of its axle. Given that, if you change the angle of the steering wheels (usually the front wheels), those wheels will continue to spin in the direction normal to their axles, and friction between the tyre and the road will prevent them from sliding sideways (ie will provide a centripetal force), thus causing the front end of the car to move to one side. Meanwhile, the rear wheels will continue to roll forwards, though at different speeds (owing to the differential), which has the effect of causing the body of the car to rotate about a vertical axis and change direction.