This is more of a confirmation post whether my ideas are correct or not. 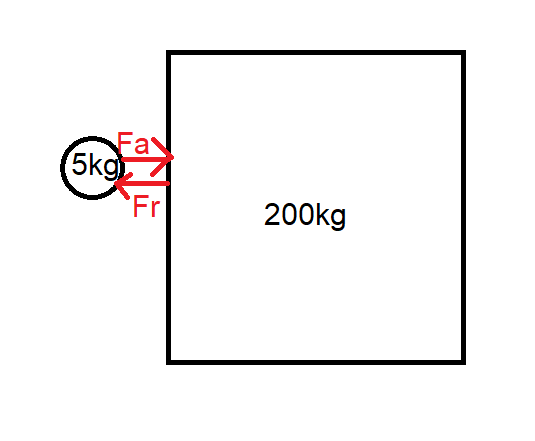 Now considering the equation of motion, we get $v=u+at$ the new velocity of the ball is: $$v=5-200t$$ right? So now if the ball is in vacuum, and energy loss due to heat and sound is $0$, If my above statements are correct, then the ball should have a retardation right? Like as soon as it touches the block, it slows down and eventually comes to rest. The retardation still acts on it so it now gains a velocity backwards. It will now keep moving backwards with an acceleration $200ms^{-2}$ right?

Now in practical situations, the ball will lose some energy on hitting the wall because of friction and heat. Now after the ball gets a negative acceleration, it will try to move back, but I have noticed that the ball won't move back much and fall down.

this question is impossible, the situation you've described isn't the full collision story , whilst the ball is hitting the block, it applies a force for SHORT time such that the change of momentum of the ball is F t where t is the duration of force application. once the ball is away from the block, no forces act in the ball and should travel with a CONSTANT velocity. if your scenario specified the acceleration and DURATION of the collision then it makes sense, as if it applies a force for a time it has some change in momentum, and then you can use conservation of MOMENTUM to find the velocity of the ball

Not the answer you're looking for? Browse other questions tagged newtonian-mechanics forces energy kinematics free-body-diagram or ask your own question.