What is the Equation of Motion for a Harmonic Motion Damped by Constant Friction?

In normal physics class, we usually learn about damped harmonic motion where the damping force is directly proportional to the velocity.

This would give us the equation

which we can solve to find the equation of motion.

However, the simplest damping force is friction. For a mass attached to a spring on a table, the kinetic friction only depends on the normal force and the coefficient of friction. In other words, it is a constant.

Our equation would then be

How would we solve this differential equation?

How does one solve this? I don't think there is any analytical solution, so one solves it numerically. Here's the solution using MATLAB with $m$=1 kg, $b$=0.1 N and $k$=1 N/m: 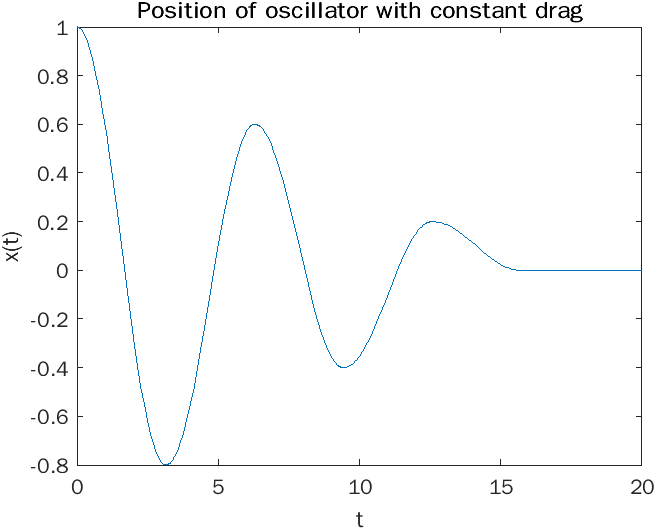 This would need to be solved piecewise between each set of turning points, since the frictional force changes sign discontinuously at the turning points.

Finally, for one of these half-cycles, we will get to the point where the particle ends a a cycle where the force of friction is greater in magnitude than the restoring force from the spring (i.e. $|x| < b/k$.) The particle would presumably then be "stuck" there for all subsequent $t$. Moreover, the force of static friction is usually taken to be greater than the force of kinetic friction, so this "sticking point" might well occur at a greater value of $x$ than this.

Not the answer you're looking for? Browse other questions tagged homework-and-exercises newtonian-mechanics friction harmonic-oscillator spring or ask your own question.

-2
Equation of motion for a compressed spring

1
What is $\gamma$ in the damping equation?
1
Damped Harmonic Curve fit and Force
1
Different frictional forces- damped harmonic motion
1
The amplitude of a damped spring with a weight during the 4 first oscillations
0
Simple Harmonic Motion for Mass Attached to Vertical Spring
0
Direction of friction for damped harmonic oscillator
3
Damped harmonic motion initial conditions