Why does quantum physics use "observation" rather than "interaction" as the term for the trigger which collapses the wave function?

So I understand that when talking about quantum mechanics, quantum entities are assumed to exist as a probability wave, until they are "observed", which collapses the wave function into an observable particle.

The classic example would be the double-slit experiment, where the interference pattern tells us that the photon or electron must have been behaving as a wave until it is "observed" or "measured" by the detector, which collapses the wave to a single position.

As I have been reading more about this, what I don't understand is, why is "observation" or "measurement" the verb used here? It seems to me that "interaction" could be substituted as a functionally isomorphic term: e.g. the photon exists as a wave until it "interacts" with something which makes it collapse as a wave. Or in other words, the interaction is what collapses the wave function, and measurement is just one such type of interaction.

It seems to me this term change would preserve all the important causal relationships required to understand how quantum systems work, but would demystify a lot of the "spooky" interpretations of quantum mechanics: i.e. that consciousness is somehow involved in the makeup of the universe, and quantum particles somehow know when they're being watched.

Is there something I am missing which means that the term "observation" is actually carrying relevant semantic information which "interaction" would not with respect to quantum systems?

A single,one, photon is a point particle , and does not exist as a wave. Here is an experiment of single photons at a time, little dots on the screen.

The little dots on the left are the footprints of photons, certainly not a wave. What waves? The probability of hitting the (x,y) of the screen as seen in the progress to the right.

Observation of one photon dot follows the probability function of the quantum mechanical solution, a complicated function , not a constant as in the dice, but the logic is the same.

Observation and measurement are expressions that describe how real numbers are gathered and tabulated from experiments . In the quantum mechanical models fitting these data there can be interior interactions before the final state is reached. Look at this tau decay: 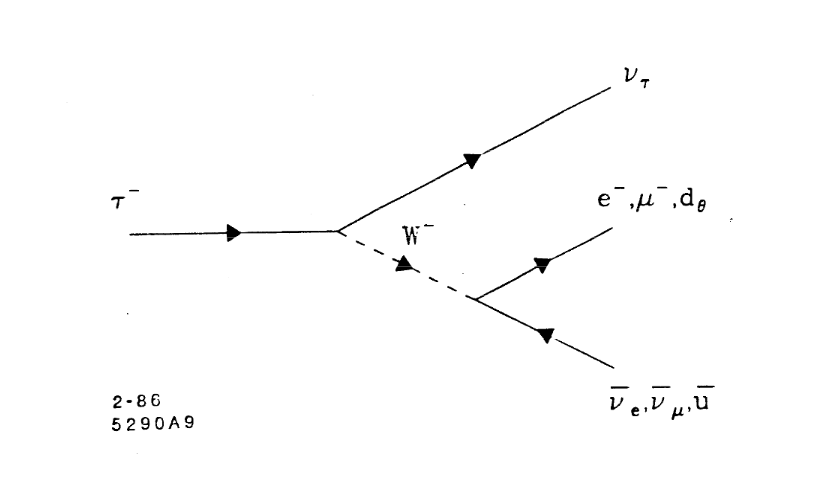 The only disadvantage of the the word interaction is that it is rather more general than measurement; its use does make the point that there is nothing spooky or special about the act of measuring or observing. Of the three words you mention, observe seems to offer the most scope for being loaded with nonsensical implications about consciousness having a role in QM.

Not the answer you're looking for? Browse other questions tagged quantum-mechanics double-slit-experiment observers interactions wavefunction-collapse or ask your own question.

3
How to observe a particle with indefinite position?
4
Double slit: why don't the edges of the slit constitute a measuring device?
4
How does the Physics work for the Quantum Suicide thought experiment?
1
A non-metaphysical interpretation of measurement in quantum mechanics
0
In the double-slit experiment of electrons (observed by photons), is it correct to say the collapse is caused by the momentum of the photons?
3
Does observation in quantum theories always imply interaction (affecting quantum system with photons, electromagnetic fields, etc.)?
3
Can observation by animals collapse the wave function?