Why is harder to accelerate object at higher speeds if speed is relative term?

Why is it harder to accelerate object at higher speeds (even if resistance forces dont exist) if speed is a relative term? Object speed is relative term, it depends from wich frame of reference we are looking at, object can travel with 1m/s in one frame but if I look from some other "galaxy" it can travel 10000km/s etc etc..

If I travel in space at 1m/s or 1000km/s for me is the same,I dont feel any difference, same think as stay at rest (0m/s).So any constant speed dont change nothing.Zero speed same as any speeds.

My logic can't understand this phenomenon..

In the context of special relativity, the description of "harder to accelerate" is from a fixed inertial frame [as @m4r35n357 said in the comments] and it's as @Marco says that it's due to the addition of velocities in relativity.

This visualization I made in Desmos might help:
https://www.desmos.com/calculator/tjngj63cat 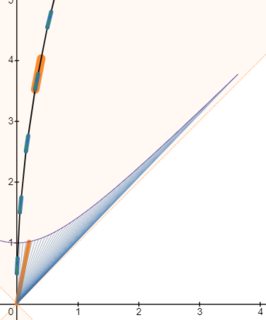 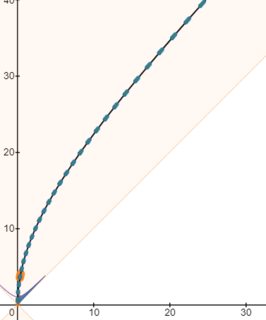 Constant proper acceleration means that the change-in-rapidity $\Delta \theta$ ("Minkowski-angle") is proportional to proper time ["astronaut wristwatch time"] $\Delta\tau$ ("Minkowski arc-length"). (Proper-acceleration is akin to worldline-curvature, measuring the deviation from being a geodesic by the turning of the tangent-vector.)

The accelerated worldline is a hyperbola with timelike-tangents [time running upwards] and I have broken it up into sections suggesting the changes-in-rapidity for equal amounts of astronaut-proper-time. The astronaut's spatial-velocity according to the lab frame given by $c\tanh\theta$, essentially the astronaut's (orange) 4-velocity vector's slope with respect to the vertical [lab-frame worldline].

($v=c\tanh\theta$ is analogous to the Euclidean case where the slope is equal to the tangent of the angle of the tangent-vector: $m=\tan\phi$.)

As $\theta$ increases without bound, $v_{astronaut}=c\tanh\theta$ asymptotically approaches $c$. You may have to zoom-out to see this behavior.

As the motion progresses (advance the $N_i$-slider in the visualization), subsequent equal-changes-in-rapidity correspond to decreasing-changes-in-spatial-velocity according to the lab frame.

These equal-changes-in-rapidity can be visualized as proportional to the equal-area hyperbolic sectors of the unit-hyperbola [with spacelike-tangents] cut by successive radii (representing the astronaut's 4-velocity in the lab frame).

In the non-relativistic case (where the PHY 101 position-vs-time graph has a [non-Euclidean] "Galilean spacetime geometry"), it turns out that the Galilean-rapidity (Galilean-angle) is [degenerately] proportional to the slope. This special case is part of our "common sense" and makes it difficult for us to see the more general situation that slope and angle are not proportional (as it is in Special Relativity and Euclidean geometry).

To play with this idea, tune the E-slider in my
https://www.desmos.com/calculator/emqe6uyzha
robphy's "spacetime diagrammer" for relativity v.8e-2021.
E=1 corresponds to Special Relativity, E=-1 is Euclidean Geometry, and E=0 is Galilean Relativity.

Now suppose you are on a space ship travelling at .99999999999999999c relative to some planet. In your frame, you are at rest. If you fire your engines you will accelerate away just as if you had been at rest, and you can increase your speed by another 0.9c if you like. So in your frame, you can always accelerate as normal. However, when viewed from the plan et, you are still only doing 0.999999999999999c- so all that extra acceleration, which seems absolutely normal to you, has had no measurable effect at all on your speed from the planet's perspective- you seem to have been firing your engines to no effect whatsoever.

Even at non-relativistic speeds, the amount of work required to accelerate a body depends on the body's speed relative to the reference frame in which the amount of work is determined. If you accelerate yourself to a metre per second by starting to walk down a street, the work you will have done will appear greater from the perspective of a person cycling at ten metres per second in the other direction. They will see you accelerating from ten to eleven metres per second, and importantly they will see that you applied a force over a longer distance (an extra ten metres), and, since work is force time distance, that means you have done more work. You will also see that your increase in kinetic energy is much greater in the frame of the cyclist than in the frame of the street.

Thought experiment, thinking about doing work via an intermediatary electron can give good insight into why more work is needed to change the velocities between different reference frames, regardless if jts the SAME CHANGE IN VELOCITY an electron interacts with another electron

scenario 1 electron A exists, and electron B exists, they are at rest with each other, I do work on electron A such that the electron A maintains a fixed distance to B overcoming the Em forces or repulsion of electron B, Such that A exerts a constant force on B the electron A then "stops existing", such that electron B is traveling at 1m/s relative to the initial reference frame at the moment is dissapears

now consider the same scenario but in a different reference frame. such that the originally "at rest" electron B is moving at 100m/s, but starting at the same distance from B as in the first scenario. Now in this reference frame the equations say that to accelerate an object the same way before, more energy is required.

Why is this the case?

Now consider electron A is at my new rest frame , to maintain a constant distance from electron B( to apply a constant force, ) I would have to do work on electron A to match the velocity of particle B going now at100m/s, which would be 1/2m(100)^2

like the amount of work required for changes in kinetic energy, kinetic energy itself Is also frame dependant. however energy as a number is useless ( infact there is a freedom in all form of energies for a( +c ) in the definition e.g potential energy, EM energy density) the only thing that matters is CHANGES in energy. in collisions the RELATIVE velocities on 2 bodies colliding in all frames is the same ,thus same transfer of energy in each frame regardless of how different the energy as a number looks in each frame.

Not the answer you're looking for? Browse other questions tagged newtonian-mechanics special-relativity classical-mechanics acceleration or ask your own question.

31
Why is the work done by a rocket engine greater at higher speeds?
25
How can kinetic energy be proportional to the square of velocity, when velocity is relative?
0
Will car burn same amount of fuel with equal acceleration $(ΔV)$ but at different speeds if resistance forces don't exist?
1
Why can't a mass be accelerated to the speed of light if its mass does not increase with speed?

114
If all motion is relative, how does light have a finite speed?
0
Are there any well-known large body objects moving at a significant fraction of the speed of light relative to earth?
2
Does constant acceleration (from starship crew pov) to relativistic speeds look newtonian?
1
How can I understand if an object stay (zero velocity) or moving with constant velocity (zero acceleration)
0
How can the energy applied to an object differ depending on the reference frame
0
Will car burn same amount of fuel with equal acceleration $(ΔV)$ but at different speeds if resistance forces don't exist?