The Japanese tsunami, moving at about 700 km/h, affected areas as distant as Chile's coast, 20 hours after the earthquake. How does the Coriolis force affect tsunami? Also, I saw an image of a boat caught within a large whirlpool. Is the whirlpool's rotation due to Coriolis force?

I don't believe the Coriolis force has much effect on a tsunami because it does only affect moving masses. Coriolis force in fact isn't a force but a movement pattern looking as though a force were involved. It is a result of inertia "driving" the moving masses towards a constant direction in space and at the same time the earth's rotation taking place.

However, while a tsunami travels across the globe there is little water moving, instead what actually is moving is its energy. By contrast, in hurricanes there is actually a huge amount of air moving which is affected by Coriolis force.

UPDATE: Raskolnikov supplied us with sources that suggest Coriolis force has an effect which I do not question. However, I think it's negligible, although the wave recordings on the images presented to us show a curved trajectory. Deepak Vaid suggests this is due to ocean currents which I find not very convincing as they move at negligible speeds compared to that one the tsunami moved at.

I think the curvature of the trajectory we see on the images is an illusion due to the map projection just as in the image below showing the geodesic (straight line) between Japan and Chile: 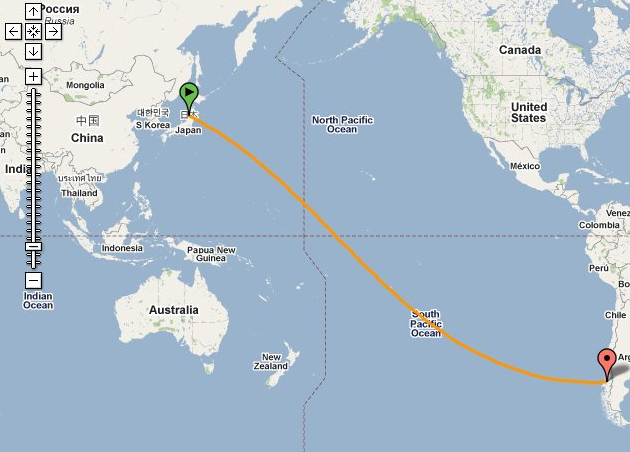 This is the aforementioned image mapped onto a sphere.

The NOAA map in gnomonic projection 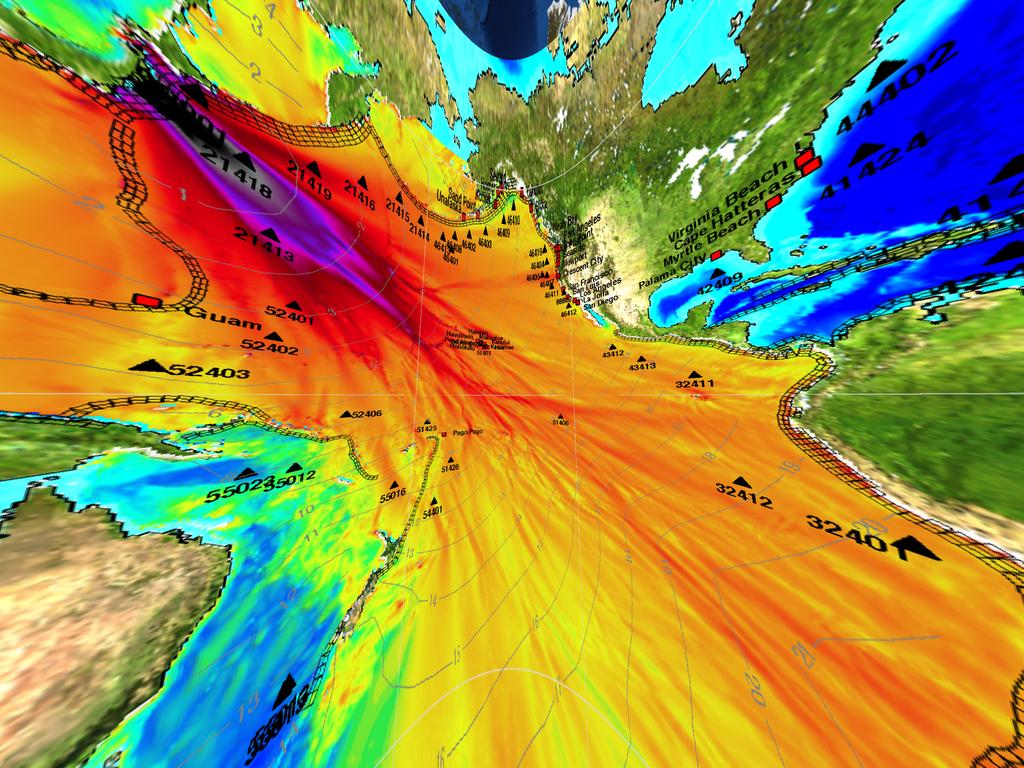 It does have an effect.

As noted in the paper, the Coriolis force only becomes important over large distances.

Here's an article on MathWorld including many references.

As waves, tsunamis have very high velocities, you would think it would be enough to see the Coriolis effect, but in fact there is little effect.

When in deep water, tsunamis move very quickly, but the water of which they are composed move very slowly. A typical example, is a wavelength of 200km, amplitude of 1 meter, and a period of around 30 minutes. Therefore, the water only has a speed of on the order of 1 meter per hour. This is a tiny fraction of the speed of clouds in the atmosphere which are effected by the Coriolis effect.

When a tsunami nears land, its height increases dramatically and so the distance the water moves increases as well. Suppose the tsunami moves a distance of 10km with a period of 30 minutes. This implies an average speed of 40km/hour which is fast enough to bring the Coriolis effect into play.

Putting the numbers ($\boldsymbol{v} = 40\; \textrm{km}/\textrm{hour}$ and $\boldsymbol{\Omega} = 2\pi/24\;\textrm{hours}\;\;$ ), into the equation, we find a maximum acceleration of about:
$\boldsymbol{ F}_C/m = 0.0016\;\textrm{m}/\textrm{s}^2$.
Since this is small compared to the gravitational acceleration (9.8 m/s$^2$ ) that is governing the last stages of a tsunami, the effect will be completely negligible. Local terrain completely determines the tsunami's behavior.

Your adjective "large" in "large whirlpool" may be very misleading. If you mean hundreds of meters, no effect of the Coriolis force may be visible by a naked eye at this scale. The origin of the whirlpool had to be different.

Quite generally, tsunami is all about waves, and if one has a wave, molecules of water are moving back and forth, in circular patterns - and the radius of the circle doesn't exceed 10 meters - the height of a tsunami.

That's very different from the motion of water in rivers which flow along straight lines and the Coriolis force always acts in the same direction.

However, if the water molecules are making periodic circles, the effect of the Coriolis force is not too different from the case of the Foucault pendulum,

The plane in which the circle belongs tends to rotate by 360 degrees in 24 hours or so - which is actually comparable to the lifetime of a tsunami on the ocean. However, I think that the internal dynamics of the water tends to redirect all the motion in the waves so that it can only go up and down, or in the same circular patterns correlated with the direction of the wave.

My guess is that the impact won't be measurable at the end - because radially centered waves on the ocean is the only resulting pattern I can easily imagine - but I am not quite sure.

The Coriolis force certainly has an important role to play as the image below vividly demonstrates: 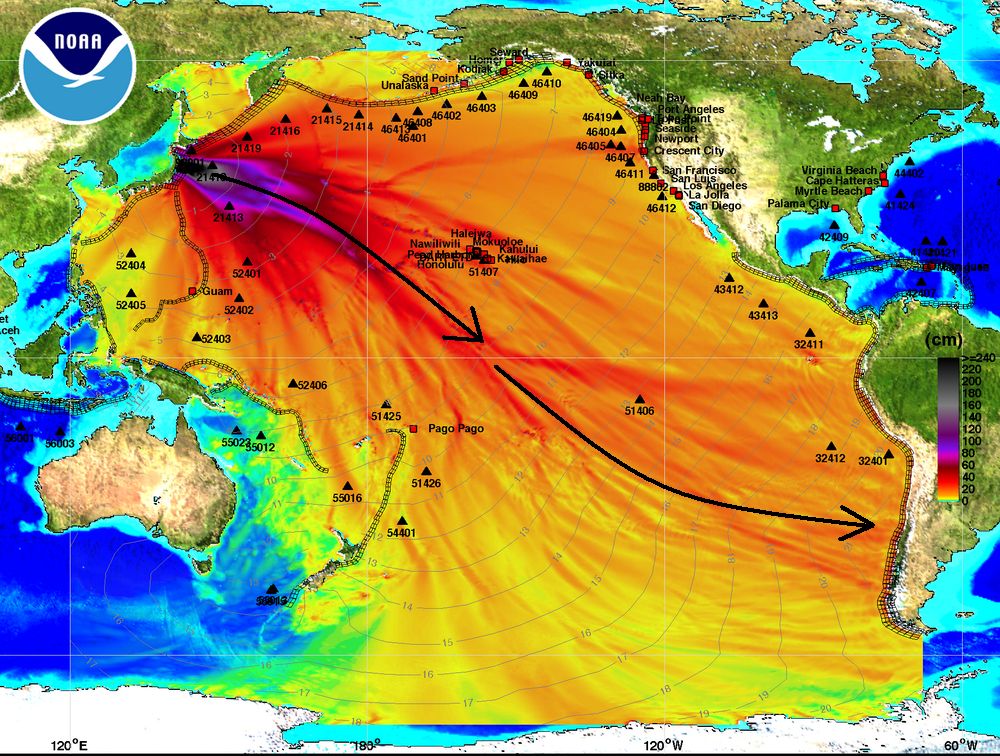 [Image courtesy of NOAA, the weather water cooler and of course @Raskolnikov who first pointed it out.]

As @artistoex noted in his answer:

... while a tsunami travels across the globe there is little water moving, instead what actually is moving is its energy.

Exactly! However this energy flow will ultimately follow the underlying oceanic currents. And these are determined entirely by the Coriolis force. This is one reason why the west coast of the United States is seemingly protected from tsunamis unless the point of origination is within some finite distance from the coast. From the scale of the map, I'd make a very rough estimate of 500 - 1000 miles for this tsunami "danger-zone" as far the western US is concerned.

Of course the "ring of fire" runs from Japan right up around the west coast of the US so the likelihood of a severe earthquake within that zone which would generate a catastrophic tsunami headed for the California coast is high enough to keep emergency planners on their toes.

The above image and much more incredible information can be obtained at the NOAA Tsunami Database. A source for information on ocean currents is this site.

Not the answer you're looking for? Browse other questions tagged coriolis-effect or ask your own question.

12
Are water waves (i.e. on the surface of the ocean) longitudinal or transverse?