How fast would body temperature go down in space?

What would be the rate of temperature loss for an average sized human in space without a suit? A human generates about 100 watt at rest. But how can we use that to calculate how fast the temperature will go down? Also how much heat would be absorbed by the sun? Assume the person is somewhere between the earth and the moon.

Here's a quick and dirty approximation:

Approximate a human with a water-sphere of radius $r$. Assume that blood circulation keeps the body temperature homogenous and that the skin keeps the water from boiling off (this isn't realistic but I figured this was the kind of situation you were thinking of). If we assume the sphere is a perfect blackbody, the heat loss due to thermal radiation is given by the Stefan-Boltzmann law:

where $T$ is the temperature of the water and $A$ is the surface area of the sphere. The rate of temperature change will be:

where $m$ is the mass of the sphere, $C$ is the specific heat capacity of water,$\rho$ is the density of water and $V$ is the volume of the sphere. Hence, we get a differntial equation of the form:

and put it into the above equation, we get:

Hence T will change as:

Here I have plotted the time evolution of the temperature according to this formula: 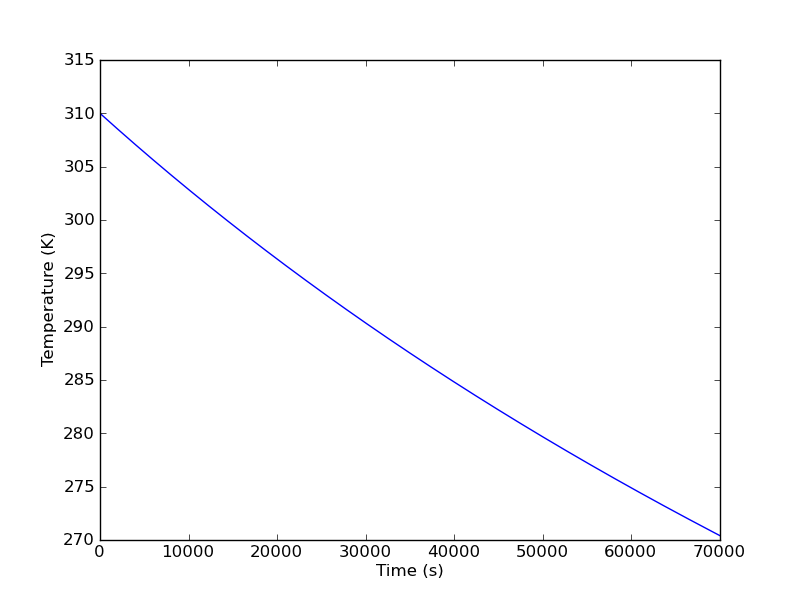 As you see, it takes approximately 65000 s (almost 18 hours) for the sphere to freeze. This is obviously something of a worst case scenario. I have not included the effect of heat produced by the human body, incoming (solar) radiation, less than perfect emissitivty, possible insulation, etc. These could make it take much longer or even prevent cooling, depending on the assumptions.

The answer by jkej is good. I will add onto the discussion by using numerical software. Here is syntax in Maple that solves the equation already discussed.

This is consistent with the other answer. For reference, $\alpha=1/(3 a^3)$. Since we have a value for $a$ we can get alpha trivially. Now let's try it with heat production! This is solving the following differential equation.

As the time limits to infinity, we expect the function to level out at $(\beta/\alpha)^{1/4}$. If you assume that the heat production is 100 Watts, then:

The syntax to solve the differential equation is:

Getting the answer to a coherent format takes some algebra wrestling. For simplification, I collected terms to insert the final temperature calculated before. The "solution" to the differential equation is then:

This has to be solved at every time step. Here's what I produced: 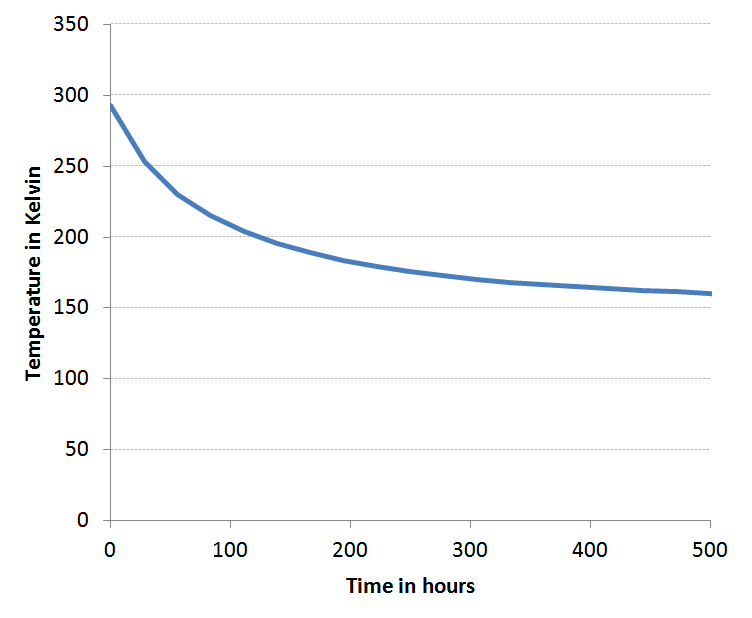 The time frame is still about the same. Nothing really interesting to speak of. It should be noted that the astronaut's mass comes out to like $520 kg$, which is fairly unrealistic. That's a major factor in the time frames being as long as they are.

In the above graph the astronaut freezes in about 11 hours. While there is some correction needed for the radiative area exposed to space, the linear dimension of the astronaut exceeds a meter in the vertical, so there are corrections in both directions. While the effective radiative area should still probably be revised downward, it won't compare to the downward revision to the mass. So in practice you will freeze sooner. Maybe you'll freeze in 4 hours or so. You'll be comatose at 31 degrees C, which linearly interpolated, only takes about 13% of the time, or 39 minutes. Hypothermia should only take 12-13 minutes. Loss of hope, probably sooner.

This made me think - if you're stranded floating in space, curl in the fetal position so you won't radiate heat as fast.

I realized the above graph is technically wrong. After it crosses the freezing point the heat production shuts down. Because you'd be dead.

Not the answer you're looking for? Browse other questions tagged thermodynamics temperature thermal-radiation vacuum or ask your own question.

18
What would actually happen to a person jettisoned into space?
25
How does space affect the human body (no space suit, no space craft)
13
Why does a metal bar in space in the shadow of the earth not go to absolute zero?

3
Will the earth never cool, but only get hotter?
13
Cooling down a container in outer space
1
/HVAC/ Air speed and influence on human body
0
At what rate does a wet clothing decrease the temperature of a human body?
2
Calculating the rate of heat loss of a body
0
Can body of one temperature ever cause higher temperature in another body?
16
Stefan–Boltzmann law applied to the human body