So I am pretty new to quantum mechanics (mostly related to atomic structures), and have some difficulties in the following setup:

Consider a particle of mass $m$ confined to a one-dimensional box of length $L$. The particle moves in the box with momentum $p$ colliding elastically with the walls. We consider the quantum mechanics of this system.

At each energy state, the particle may be represented by a standing wave given by the de Broglie hypothesis. Express its wavelengths $λ_{dB}$ in terms of $L$ in the $n^{\text{th}}$ energy state.

First of all, (it may seem silly), what is energy state here? In atomic structure, I know it corresponds to electrons permissible energy in shells, as per Bohr's quantization. But here in this setup, I couldn't grasp the meaning of 'energy state'.

Secondly, question asked to express particle as a standing wave. I know the standing wave concept but from a classical mechanics point of view, not quantum mechanical. I couldn't figure which concept should I apply here. 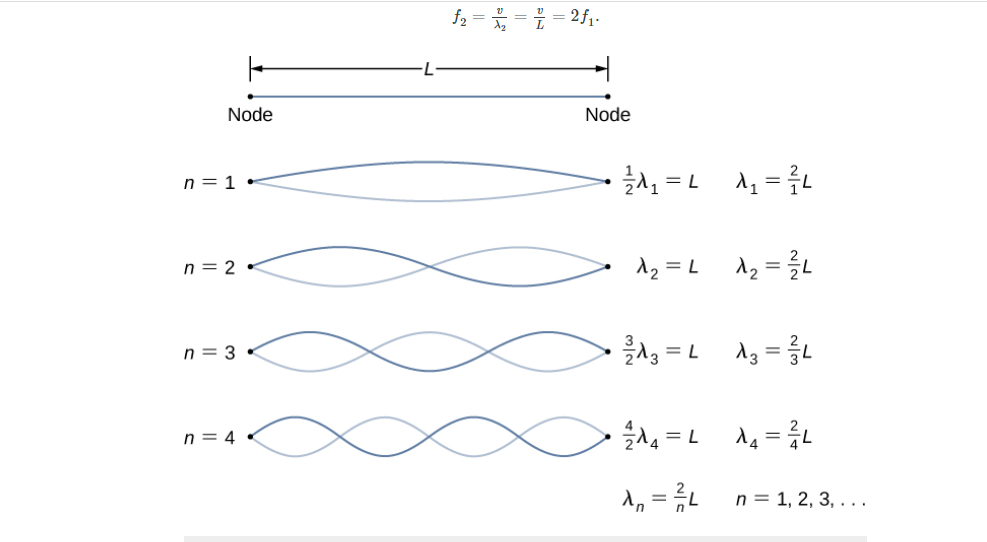 Interestingly, the answer is $\lambda_{dB}=\frac{2L}{n}$, which is the same as the general formula of standing wave (classical) wavelength as shown in the figure. I don't know how the $n$ in the figure of standing waves and the $n$ corresponding to energy state in our state are so related, so this is my major doubt. I may be confused between these formulae, but I can't help myself here.

Not the answer you're looking for? Browse other questions tagged quantum-mechanics waves wavelength or ask your own question.

3
Is quantum entanglement an objective or subjective property?
3
When we say particle in a box has quantized energy, is that kinetic or total energy?
0
why does a particle in a box work like an electron in an atom orbit?
1
If the bound states to the infinite square well are stationary waves, why does the ground state consist of half a wavelength?
4
Individual particle states in Fock space
2
Doubt on "wave-particle duality" in quantum mechanics
4
Why is de Broglie wavelength related to momentum not energy?