13.2 billion years ago the universe was rather small, having started only half a billion years ago. Today, with the help of Hubble Space Telescope, we are able to capture the light of galaxies emitted at that time.

It looks like as if there was a race between our point running away from those galaxies (with the expansion of universe and space) and the light that was emitted at that time. And only now that light has reached and overtaken us. But if that is so, then wouldn't it put a limit on the oldest light we can see, no matter how powerful the telescope is (even it is more powerful than the James Webb Space Telescope)? This should be expected, because at the time just after the Big Bang, the light emitted by all objects must have already overtaken all other objects, including the location of earth. Therefore we will never see the light that old (close to the time of Big Bang) no matter how powerful the telescope. If this is so, what is the theoretical limit we can see far back in the past?

It looks like as if there was a race between our point running away from those galaxies (with the expansion of universe and space) and the light that was emitted at that time. And only now that light has reached and overtaken us.

That's correct. A photon from a distant source has to overcome the expansion of the universe in order to reach us. I'll illustrate it with an example. The graph below shows the path of a photon in an expanding universe (based on the Standard Model of cosmology and the latest data). 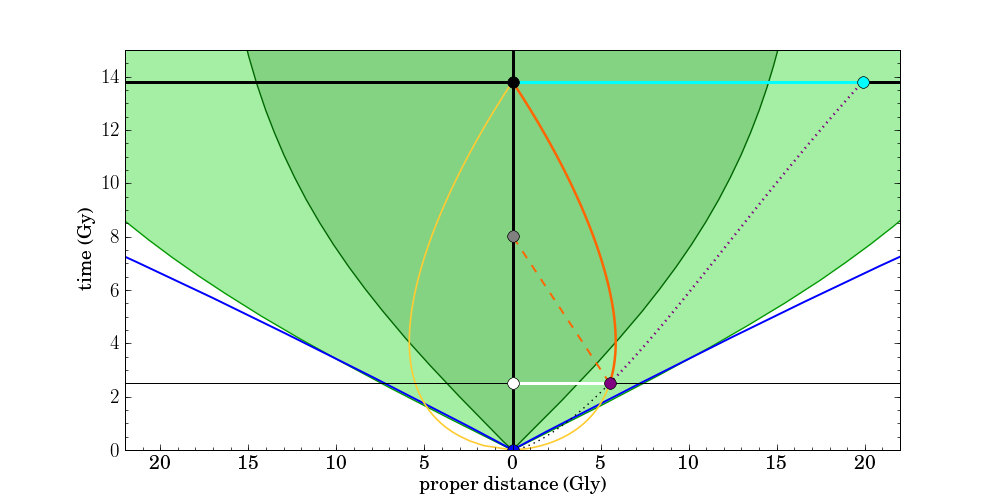 The horizontal axis shows the distance to us, and the vertical axis is the cosmic time. Over time, our galaxy moves on the black vertical line, and we're currently located at the black dot: the current age of the universe is 13.8 billion years.

Now, if the universe wouldn't be expanding, then the light would've only needed 5.52 billion years to reach us (moving on the dashed orange line). However, the universe does expand, and as a result the light followed the thick orange line, taking 11.3 billion years to reach us. So because of the expansion of the universe, the light needed about twice as much time to reach us. During that time, the expansion caused the source itself to recede from us, following the dotted purple line, and its current distance to us has increased to 19.89 billion lightyears (cyan line).

There's one more interesting point: the source galaxy is receding from us faster then the speed of light (yes, that's allowed in General Relativity). Because of that, the distance between us and the photons was initially increasing (the expansion was 'winning' the race). But gradually the photons moved through regions that were receding from us slower: the dark green line represents the so-called Hubble distance: the region of space that is receding from us at the speed of light. So when the photons crossed that line, their distance to us began to decrease. All photons that we observe today have been travelling on this teardrop-shaped curve, which is called our past light cone.

But if that is so, then wouldn't it put a limit on the oldest light we can see, no matter how powerful the telescope is?

Yes. The maximum distance of regions of space that we can observe is called the cosmic particle horizon, and is shown in the graph as the thick blue line. You can think of it as the path of a photon sent out from our location at $t=0$. If we zoom out the graph, it looks like this: 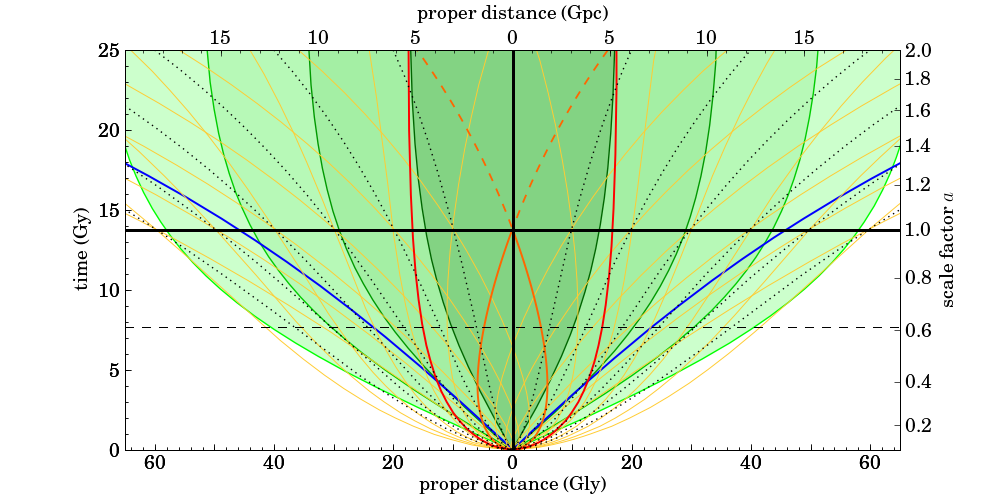 The current distance to the particle horizon is 46.2 billion lightyears, and everything inside it is called the observable universe. We cannot see anything beyond it.

This should be expected, because at the time just after the Big Bang, the light emitted by all objects must have already overtaken all other objects, including the location of earth.

No, in fact the expansion rate of the universe was very high in the beginning, so the photons from distant regions couldn't reach us. The expansion then slowed down, until it began to accelerate again when dark energy started to dominate (when the universe was around 7.7 billion years old).

If this is so, what is the theoretical limit we can see far back in the past?

In theory, all the way to the very early universe, when all particles were created (which, according to leading theories, was at the end of the inflation era). However, the early universe was so dense that it was opaque, so we cannot see photons from the first ~380,000 years (although in principle we could detect neutrinos from that era). When the universe was about 380,000 years old, the density was low enough for atoms to form, and photons could move freely. Those photons are the oldest light that we can see, forming the Cosmic Microwave Background.

For a more detailed and technical explanation, see this post.

The light from formerly nearby galaxies needed this long time to get here because the Universe – and the distance in between the source galaxy and ours – was expanding as the light was travelling. So when the light got to the middle point, for example, the distance between both galaxies was already just a bit smaller than 1/2 of 13.7 billion light years.

Light from places that are even further than the observable Universe couldn't have gotten here at all because its attempt to overcome the expansion of the huge distance between this beyond-the-horizon galaxy and ours is as hopeless as attempts to surpass the speed of light.

If you actually want to compute how much time it takes for light to travel over a distance in an expanding Universe, you need the FRW geometry - metric tensor of the form $$ ds^2 = -c^2 dt^2 + a(t)^2 (dX^2+dY^2+dZ^2) $$ I assume that the spatial sections at a given time are flat, in agreement with observations. The function $a(t)$ is an increasing function of time that quantifies how a unit distance at one time grows at another time – the overall scaling of $a(t)$ is irrelevant because it may be absorbed to the normalization of the coordinates $X,Y,Z$, too.

So the physical, proper distances at a given time $t$ are $a(t)\cdot \Delta Z$ rather than $\Delta Z$ itself. But $t$ measures directly the time from the Big Bang, according to a galaxy at rest.

I don't want to be explicit about the form of these functions – they're a bit complicated as the expansion of the Universe has had different power-law stages etc. – but the point is that the light moves along trajectories with $c\cdot d\tau =\sqrt{dX^2+dY^2+dZ^2}$, i.e. along nice 45-degree curves in the $\tau,X,Y,Z$ coordinates if I set $c=1$ now.

The reason why light needed such a long time is that it actually needed a short time in the $\tau$ coordinate – just like you expect, the Universe was small, the distances were rather short half a billion years after the Big Bang, and $c\cdot \Delta \tau$ is directly equal to this short distance. But the problem is that $\Delta \tau$ isn't the actual proper time. The actual proper time $\Delta t$ is the integral $\int c\cdot A(\tau)\cdot d\tau$ and the factor $A(\tau)$ will be getting larger and larger as the Universe expands and indeed, it will be 13.2 billion years despite the proximity of the initial galaxies.

Not the answer you're looking for? Browse other questions tagged cosmology space-expansion telescopes or ask your own question.

1
Why can't some light ever reach earth?
1
Can we see beyond the Hubble Volume?
0
Can we really see new objects in future?
63
Can space expand with unlimited speed?
16
Misconceptions about the universe - Hubble Sphere
18
The difference between comoving and proper distances in defining the observable universe
12
Can matter leave the cosmic horizon?
3
Exploring beyond event horizons
1
What is outside the boundaries of our universe (Future horizon)
1
With what fraction photon quanta emission rate is decreased in the expanding universe?
See more linked questions

13
Are scientists missing the point with distant cosmic objects, or is it just me?
12
What will we see between the CMB and the current oldest object seen?
7
Do we need Dark Energy to explain the acceleration of the expansion of the universe?
1
What is the limit of the deep field exploration?
3
What is the furthest thing we can see at the time the light was emitted?