In the well-known resistor cube problem using a resistor cube with equivalent resistors on all the edges, the prescribed approach to solving it involves merging points of equivalent potential as shown below: 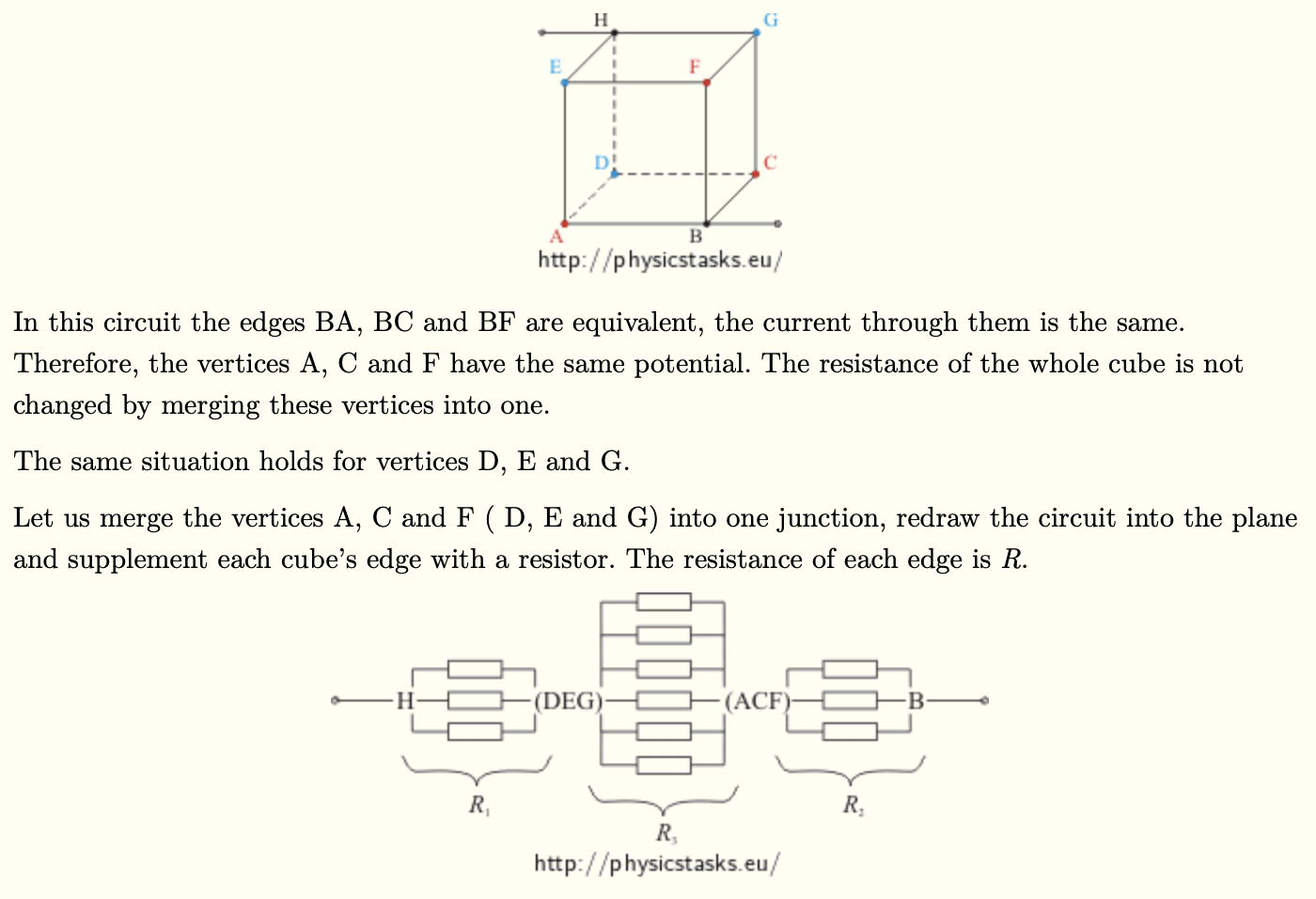 While I can work through the logic superficially, I just can't make sense of it intuitively. Why is it that linking up points of equivalent potential doesn't change the resistance of the circuit, beyond the explanation always given that "current does not flow through the 'phantom' conductor connecting vertices of equal potential". What is the intuition for this solution to the resistor cube problem?

There is no intuition other than that no current flows across two points at the same electrical potential. When two or more resistors have the a common node (endpoint) and are identical, the potential drop across them is the same, even if their other nodes are not physically connected. This is functionally equivalent to saying the resistors are in parallel and is essentially what the solution you have quoted is explaining.

Using this approach, the three edges of the resistor cube with the common node H are in parallel, which you can consider group A. This group has the equivalent resistance of $R_A = R/3$, assuming each cube-edge has resistance $R$. Symmetrically, the three resistors at the opposite end with the common node B are also mutually parallel. That is another group, B, again with overall resistance $R_B = R/3$. The slightly tricky one is the remaining group of six resistors. For each of them, if you consider their endpoints which are closer to H, you will notice they are actually at the same potential, since the current through each of them previously had to pass through exactly one identical resistor. The same argument applies to their other nodes (closer to B) -- they are also at the same potential. In other words, the remaining group of six resistors are also mutually parallel -- call it C. This group has the equivalent resistance of $R_C = R/6$.

Not the answer you're looking for? Browse other questions tagged homework-and-exercises electric-circuits symmetry electrical-resistance or ask your own question.

1
Voltmeter readings at different points in a circuit
8
How to find points with same potential while solving an equivalent resistance problem?
4
Equivalent Resistance of a Cube of unequal resistors
7
How can current pass through (resistanceless) connecting wires?
6
Generalized method for dealing with circuit involving symmetry?
8
Why does the superposition principle for calculating equivalent resistance work for asymmetrical objects?