What is the cause and what is the effect in the Bernoulli effect?

There is widespread confusion (among learners) about the Bernoulli effect, and I think a large part of this confusion is owing to muddling up cause and effect. So I am providing this question and answer to see if others find it helpful.

Let's consider laminar flow (i.e. smooth flow in layers) of a fluid with pressure $P$, density $\rho$, flow speed $v$, gravitational potential $\phi$. Then Bernoulli's theorem is that, when heat conduction and work against viscous forces is negligible then along any given streamline, $$ u + \frac{P}{\rho}+ \frac{1}{2} v^2 + \phi = \mbox{const.} $$ where $u$ is the internal energy per unit mass of fluid when the fluid is not moving and is at zero height. (The $u$ term can be dropped for an incompressible fluid).

The answer is that the pressure change is the cause and the flow velocity is the effect.

Note that the Bernoulli theorem applies to the changes of $P$, $\rho$, $u$, $\phi$ and $v$ along a streamline. It is not a statement about pressure gradients in some other direction. Let's take a case where $u$ and $\phi$ are independent of position. If the pressure in some region is higher, then it makes sense that the fluid will slow on moving into that region, since it has to do work on the fluid ahead to push it along. Similarly, on moving from a higher to a lower pressure region the flow will speed up because pressure forces from the higher pressure region do more work (for a given distance moved) than the work expended in pushing against the fluid ahead, so the fluid's kinetic energy will increase.

When we consider Newton's second law we say the force is the cause and the acceleration is the effect. We should say the same about fluid flow.

A thoughtful physicist might reply that since Bernoulli's theorem applies to a steady state of flow it is not possible to separate cause and effect; the theorem merely asserts that both properties appear together and one cannot have one without the other. I feel that nonetheless it is clearer to say that the pressure difference is the cause and a change in flow velocity is the effect, because this makes sense of the process happening at each fluid element: it is being accelerated exactly as Newton's second law dictates.

Let's consider flow down a pipe of diminishing diameter. As the fluid enters the region of diminishing diameter, the flow is restricted at first so, before steady state conditions are achieved, there is liable to be a slowing of the flow into region ahead of the restriction as the density there builds up. This will also increase the pressure. The increase in pressure is caused by the arrival of more fluid than leaves. This results in a pressure difference between this region and regions further along, with the result that fluid leaving the region accelerates and flows more quickly through the restricted diameter. Eventually there is a steady state of flow and Bernoulli's theorem can be applied, and my statements about cause and effect also apply.

There is a very nice demonstration experiment where one hangs two curling pieces of card or paper from adjacent horizontal rods. The investigator (or victim) is invited to blow air between the cards and the intuition is that one might expect them to move apart, but in fact they move together. Why? It is because the air pressure behind the cards stays fixed, while the air flow set up by the blowing leads to a lower pressure in the moving air between the cards. It seems amazing that this blowing will lower rather than raise the pressure. But I think what happens here is that there is an initial transient phase in which there is an increased pressure while the air initially between the cards is accelerated away, and then the steady flow at lower pressure sets in after that.

When air flows more rapidly over the top than the bottom of an aerofoil, this is owing to (rather than the cause of) the pressure variation along the streamlines. There is a lower pressure above than below the aerofoil, and therefore a lift force and also a greater acceleration of air along the flow lines that pass over the wing. The interesting question now becomes, how does that pressure difference come about in the first place? To answer this one gives thought to the movement of the whole fluid from before to after the aerofoil (in a model where the aerofoil is fixed and the fluid flows) and it becomes apparent that in steady state the flow pattern must be as just described and therefore the pressure variation must be as just described. But this 'therefore' is a reasoning or deductive 'therefore', not a cause-and-effect 'therefore'.

(By the way, the only forces on the wings of an aeroplane are the forces acting right there on the wing. These are pressure forces and viscous forces. It is not good physics to say that movement of air after the wing has passed by is the 'cause' of lift because there is no action at a distance in physics. The cause of the lift is the interaction right at the wing surface.)

This is an added note to react to comments on the relation between force and acceleration.

Forces come about via interactions such as the electromagnetic interaction. When molecules in a fluid push on one another, it is owing mostly to close collisions. The electron clouds come close and each repels the other. Each electron cloud is a source of an electromagnetic field which interacts with charges. For each field event where a charge is present and consequently experiences a force, the events which act as source of the field lie in the past light cone. This helps to clarify that the acceleration is indeed a response to a situation that came about owing to past events. The acceleration is not the cause of the force which is acting.

They both occur at the same time. They both appear in the Bernoulli equation, which states how they are related.

You could say that each causes the other. That followed too far will result in head-spinning. Another answer is that neither causes the other. The simple fact is that trying to apply the word cause here is a misuse of the word. They simply vary together.

It only makes sense to use cause if when we say A causes B, that B does not cause A, giving us an assymmetry. For instance, if I were to kick a football, and it broke a neighbour's window, you could correctly say that the kick caused the window to break. Most manifestly, the opposite cannot be true, the window breaking did not cause the football to be kicked.

There are many pairs of apparent cause and effect in physics that, on examination, turn out to be things that happen together rather than one causing the other. One that often foxes electrical scientists is the back EMF from an inductor. Does the change in current cause the voltage, or vice versa?

A simple mechanical situation that most of us have met and understand completely intuitively is force and acceleration. Consider hammering in a nail.

I use the words 'obviously' and 'cause' provocatively to illustrate that it's not obvious at all. Our brain/arm system makes the hammerhead follow an accelerated trajectory, which creates a force at the hand/hammer interface to accelerate it. The force from the nail decelerates the hammer head.

If we must look for a cause, then the cause of both the pressure and the velocity change is the setting up of the experimental conditions.

Interestingly, in these three situations (force, inductance, Bernoulli) the changes that occur together all appear to be driven by the requirements of Conservation of Energy.

I agree that the notion: when the velocity is larger, the pressure drops owing to the Bernoulli effect is misleading. But not because it inverts cause and consequence, but because it suggests some obscure relation between $p$ and $v$, instead of making clear that the "source" is the relation between force and acceleration.

That is the relation between the difference of the square of the velocities and the pressure drop results from Newton's second law. I don't think that is necessary to select what is the cause and what is the effect.

The concept of "cause" is wildly overused and not helpful in the momentum balance of the Bernoulli equation. A better conceptual model is a 'balance'. The Bernoulli equation is a balance. This is true for a lot of fluid flow regimes because they do not explicitly depend on time.

Altering one element of the balance will result in a new balance state, but the notion of 'cause' isnt going to be helpful. There is no fundamental primacy of one term over the other.

The competing concept of 'correlation' is much, much more helpful that 'causation' will ever be. This distinction is present in most real-world calculations... especially if time is not explicitly present. 'Cause' is a very narrow phenomenon in the physical world outside the laboratory.

Unless there is an explicit dependence on time, I never ask about 'cause' at all.

You may approach the Bernoulli by the way of the first law. I think you will agree with me that along a streamline there is a number which is always constant and the maths are fine but this not a way to decide if there is a cause or not.

Now to compare this to the Bernoulli effect consider a pipe with a smaller section in the middle. Imagine the pipe starts empty and you start pumping water into it. First the pressure and velocity will be extremely chaotic but after a while the system starts to go to equilibrium. The pipe has a constraint that has to be fulfilled in equilibrium: because it is smaller in the middle the water has to move faster in the middle section or otherwise mass isn't conserved. To accelerate something you need a force and in this case it is given by the negative of the pressure gradient i.e. $F=-\nabla p$. We need a force to the right to speed up the water so the pressure gradient needs to point to the left and we can conclude that the pressure needs to be smaller in the middle section. So once equilibrium is reached this is the only possibility. 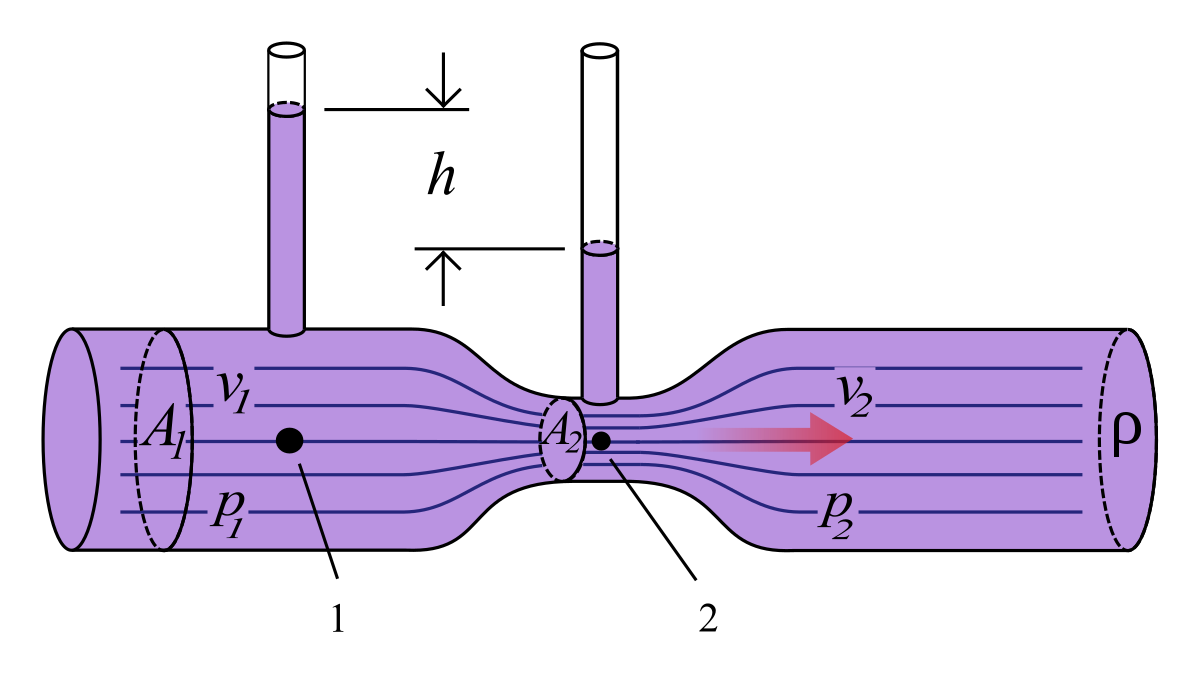 Not the answer you're looking for? Browse other questions tagged education causality bernoulli-equation or ask your own question.