Why is the Pauli's exclusion principle not violated in the two neutron beams interference experiments?

It is my understanding so far that in this kind of experiments like the one measuring the 4π (i.e. 720° Dirac Belt trick) rotation characteristic of 1/2 spin fermions like neutrons, two neutron beams are polarized via S-G apparatus to the same quantum spin number. The two separated polarized beams are initially in phase meaning identical in every aspect. Continuing, one of the two beams is then brought out of phase from the other by forcing it to continuous Larmor precession while the other beam is not forced to precess. The two beams are then combined together in superposition and a interference signal is obtained.

I understand that because in the one beam the neutrons are wobbling all the time (Larmor precession) most of the time the beams are never in phase and don't have all four quantum numbers identical and therefore the Pauli's exclusion principle is not violated. Therefore, most of the time a steady noise interference output signal is produced of the two neutron beams combined.

However, as these experiments show for every 4π of Larmor rotation period, the two beams get momentarily in phase and a maxima in the signal output is generated due constructive interference: 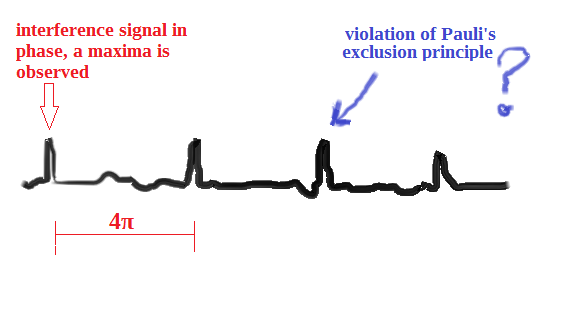 My question here is, at the points where the maxima in the interference signal are observed as shown above, meaning the two beams are monetarily in phase, do these events not violate the Pauli's exclusion principle?

The best explanation I could find so far in the literature to resolve my confusion is that mathematically this means the wavefunctions of the two combined fermions must be antisymmetric (antiparallel spin) which leads to the probability amplitude of the interference wavefunction going to a zero maxima if the two fermionic particle beams are in the same phase.

Thus according to the above interpretation IMO the signal output will be like this: 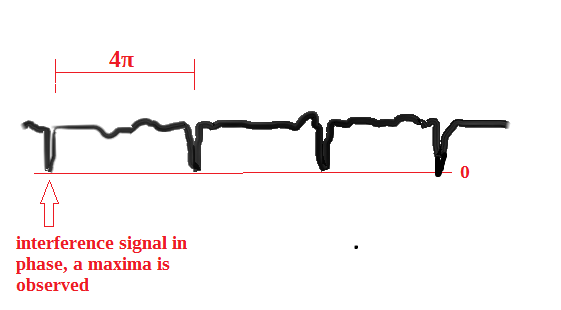 But then how can be the two beams be in phase and at the same time having a destructive interference? And most importantly, if the two neutron beams combined end up having anti parallel spin because the Pauli's exclusion principle, how then can these experiments measure the 720° rotation Dirac Belt trick characteristic of these fermions (i.e. neutrons)?

Would that not totally mess up the experiment?

A step by step procedure description of such an experiment example to measure the 4π phase characteristic of the neutron would be most beneficial for a general audience to understand how this measurement is carried out and therefore why the Pauli's exclusion principle is not violated in this experiment.

Interferometry only works if your beam is monoenergetic — that is, if the neutrons don’t all have the same wavelength entering the interferometer, you won’t be able to statistically build up an interference pattern. However, intense neutron sources are quasi-thermal. The neutrons reach the experiment by leaking out of a hole in the wall of a nuclear reactor, and have a thermal distribution like the temperature whatever’s on the other side of that hole. Typically this is either the temperature of a room-temperature volume of water, or (for “cold” neutrons) the temperature of a “moderator” of liquid hydrogen. Either way, you get a distribution of neutron speeds.

To get a monochromatic beam of neutrons, you have to take all the neutrons from your thermal beam and throw away the ones that have the wrong energy. At the NIST interferometer, most of the “thrown away” beam goes downstream to one or more other experiments: the entire beam passes through a carefully-chosen perfect crystal, and the Bragg-diffracted wavelengths are sent to the interferometer. There isn’t any “focusing” of a neutron beam; there is only collimation.

The interferometer itself is milled from a perfect-crystal silicon ingot, and is no more than about 10 cm long. A “thermal” neutron with wavelength 2 Å is moving at about 2000 m/s. Let’s consider a beam of 1000 m/s neutrons, which would have a dwell time in the interferometer of 10 µs. If your experiment were detecting neutrons at a rate 100 kHz, the average occupancy of the interferometer would be one neutron. (And the “coherence length” for a single neutron is substantially shorter than the physical interferometer.) Choose any interferometry paper, check the number of neutrons detected and the amount of beam time, and infer an actual neutron-detection frequency: lower than that, by orders of magnitude.

When we talk about “two beams” in an interferometer, that’s a little misleading: in every instance, it’s the same neutron in both beams, interfering with itself.

Neutron interference experiments like this are done with no more than one neutron in the interferometer at any given time. Here's a quote from reference 1:

All neutron experiments performed until now belong to the field of self-interference where at a given time only one neutron — if at all — is within the interferometer and the next one is not yet released from the... neutron source.

The key point is that this interference effect is a single-particle phenomenon. The Pauli exclusion principle prevents two neutrons from occupying the same state. It does not prevent a single neutron from interfering (constructively or destructively) with itself, which is what's happening in these experiments.

Like in any single-particle interference experiment, the interference pattern is only evident after accumulating detections of a large number of neutrons, but again: neutrons go through the interferometer one-at-a-time, so the Pauli exclusion principle does not apply.

More information about the experiment

@rob's answer gives more detail about how the experiment is done. To complement those details, here's a diagram from reference 2, showing an oblique view of a typical neutron interferometer (see @rob's answer for typical dimensions): 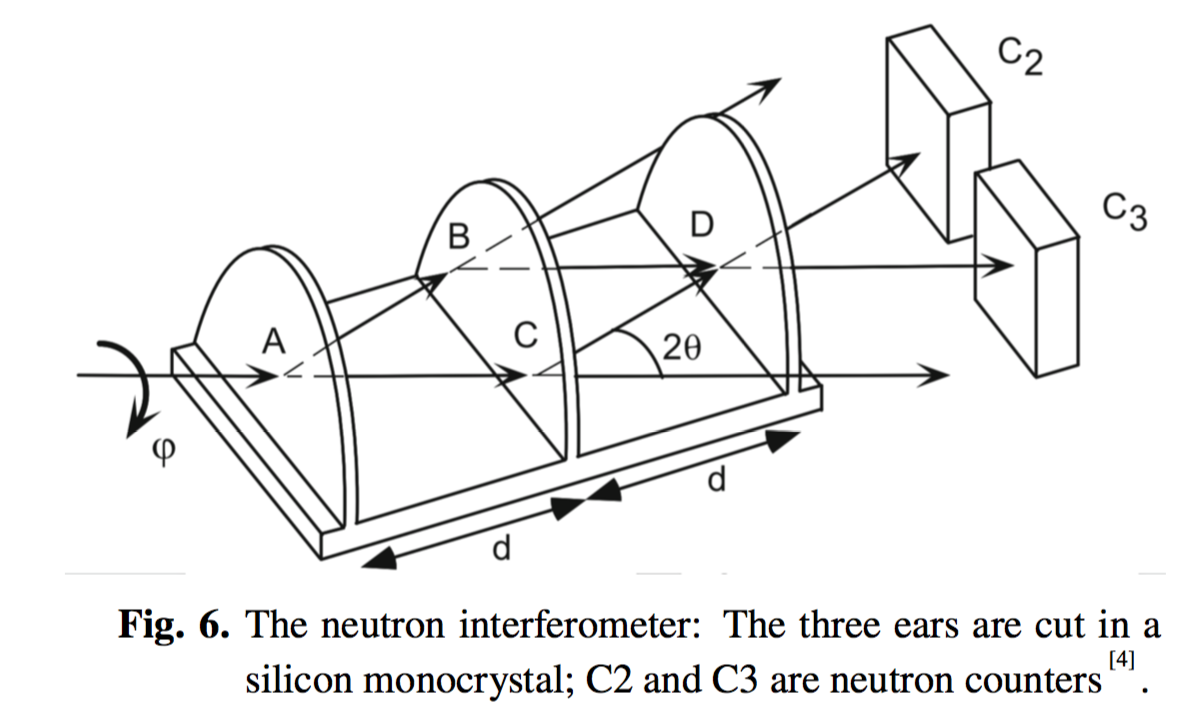 As the arrows indicate, each individual neutron enters from the left. At point A, the neutron's wavefunction is diffracted into a two-peaked wavefunction. Those two branches of the wavefunction are diffracted again at points B and C, respectively, so that the wavefunction emerging from the middle slab has four peaks. Two of those peaks converge back together at point D, and their relative phases determine the relative intensities of the two peaks of the wavefunction that emerge downstream of point D. The relative intensities of those two peaks determine the relative probabilities of detecting the neutron at either $C_2$ or $C_3$. The neutron can only be detected by one of them, not by both, because it's just one neutron. But after repeating this with lots of neutrons, the cumulative numbers of detections registered by $C_2$ and $C_3$ tell us what the relative probabilities were. (There is also some probability that neither of those detectors will register the neutron, because the other two branches of the wavefunction, the ones that are shown bypassing the third slab in the figure, also have nonzero amplitudes.)

A top view of the interferometer in a $4\pi$-rotation experiment is shown in this diagram from reference 2: 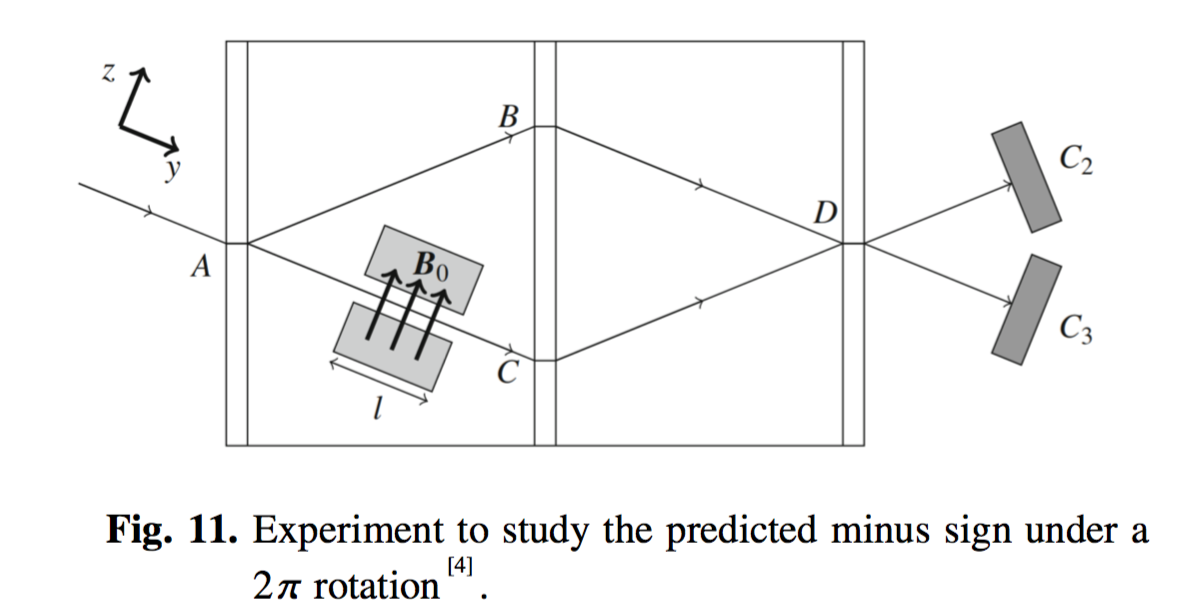 The points A,B,C,D are the same as in the previous oblique view. In this case, one of the branches of that single-neutron wavefunction goes through a magnetic field that is tuned to produce a known amount of precession. That affects the relative phase of those two branches of the single-neutron wavefunction at point D. By repeating the whole experiment many times with different magnetic-field strengths, we can map out how the relative probabilites at $C_2$ and $C_3$ depend on the magnetic field, and therefore on the amount of precession experience by one of the two branches of the neutron's wavefunction.

Again: these experiments never have more than one neutron at any point. That one neutron is interfering with itself because of the way diffraction caused its wavefunction to split (point A) and then rejoin (point D). (Diffraction itself is a kind of single-particle interference phenomenon, too.) The Pauli exclusion principle prevents two neutrons from occupying the same state at the same time, but in these experiments, that never happens. These experiments are done using only one neutron at a time. The Pauli exclusion principle clearly cannot prevent a single neutron from being in the same state at the same time... because if it did, then neutrons could not exist at all.

But how is this possible??

The fact that a single particle can take multiple paths through the interferometer and interfere with itself is something that does not have any anolog from everyday experience. It cannot be understood by thinking of a particle as a tiny version of a macroscopic object. Single-particle interference phenomena are one of the hallmarks of quantum physics, like Feynman said in this chapter of The Feynman Lectures on Physics:

We choose to examine a phenomenon [namely the single-particle interference phebnomenon] which ... has in it the heart of quantum mechanics. In reality, it contains the only mystery.

For more information about the single-particle quantum interference phenomenon, see the questions

and their answers, and also see the references listed in this other answer.

Not the answer you're looking for? Browse other questions tagged quantum-mechanics particle-physics experimental-physics pauli-exclusion-principle interferometry or ask your own question.

13
Why are wavefunction collapses instantaneous?
10
Double Slit experiment with just one photon or electron
13
Numerical simulation of the double-slit experiment including watching the electrons
8
How do experiments prove that fermion wavefunctions really pick up a minus sign when rotated by $2\pi$?
6
Operational definition of rotation of particle
1
Why is the plane wave $\tilde{A}e^{ikx}$ representing an isolated neutron not physically acceptable?

8
Deuterons can share quantum states, but why it is fine for the protons and neutrons inside?
3
Why don't two neutrons with the different quantum numbers pass through one another?
21
Are protons and neutrons affected by the Pauli Exclusion Principle?
0
How do two exactly the same (in space) wavefunctions of two non-distiguishable free particles contribute to Pauli's exclusion principle?
1
What is the formal definition of a system?
2
The Pauli Exclusion Principle for more than two particles, applied to the Coulomb Potential
1
Do anyons obey the exclusion principle?
2
Why aren't triplet states in Hydrogen molecule bound by Pauli's principle?
2
Pauli's principle on two-electron system