Why do microwaves penetrate flesh when visible light does not at the same intensity?

I understand why microwaves penetrate flesh, it has been answered before here, but in the most answers it was mentioned that although microwaves have less energy per photon when compared to visible light, at high intensities only do they penetrate and even visible light would, but at the same time microwaves would still go deeper.

Why exactly if microwaves have less energy per photon, with visible light at the same high intensity, would they be more capable of penetration?

Why exactly if microwaves have less energy per photon, with visible light at the same high intensity, would they be more capable of penetration?

As you move upward in frequency through microwaves (molecular rotation) and infrared (molecular vibration) to visible light (electron excitation), you become less "transparent" to the wave, i.e., you absorb the energy more strongly. In the lower ultraviolet range, all the uv from the sun is absorbed in a thin outer layer of your skin.

Then as you move further up in frequency into the x-ray region you become transparent again, because most of the mechanisms for absorption are gone. You then absorb only a small fraction of the radiation, but that absorption involves the more violent ionization events.

For more detailed information on the mechanisms of interaction of radiation with matter see http://hyperphysics.phy-astr.gsu.edu/hbase/mod3.html

Skin depth is calculated by:

We can easily observe from the above, that lower frequency (independent from light intensity) results to larger penetration depth $\delta_{e}$.

Therefore microwaves penetrate flesh more than visible light independent of light intensity. However the damage done on the flesh is related to the intensity and frequency of light. Microwaves can damage tissues deeper inside your body up to 12 cm deep for very intense microwave radiation. Damage from visible light is only possible a few mm deep and can give you at most a skin burn or irritation. Nevertheless, non visible UV light because its very energetic high frequency photons although its penetration depth is less than a mm can cause skin cancer. This has probably as a cause the photoelectric effect that could disturb human DNA replication. Human skin is regarded in general as a poor electric conductor.

The penetration depth in tissues or generally matter ultimately depends on processes (reflection, absorption, scattering, photochemistry) which might or may not occurs depending on composition and microscopical features.

Basically, rather than energy alone, you can think of the corresponding frequency of the em radiation (E = hf for a photon, where f is the frequency of the wave emerging from an ensemble of such photons and h the Planck's constant).

All the processes I've just mentioned require a tuning (or some offset for scattering) of this photon frequency, like a radio stay tune to a particular channel. The key is that the energy carried by electromagnetic waves does come in packets as photons, and they individually interact with matter which is as well organised in discrete energy levels.

So don't assume that a photon of higher frequency (higher energy) does more then a less energetic one. There might not be a process ready for it, or the occurrence of an event might require a longer transit thus resulting in a high penetration depth.

From the above it should also be clear that penetration depth does not monotonically depend on the energy. As you said, microwaves can penetrate biological tissues. But much more energetic x-rays can do it too. Somehow in the middle are UV and Vis radiation, which are quite effectively blocked by reflection, absorption (melanin pigment in case of our skin) and even scattering. For the last, you can illuminate with a "white" light your finger, and see that red light propagates most, similar to the Rayleigh diffusion giving red sunrises and sunsets.

(For the other question "why MW are less energetic per photon", the answer is contained in the above relation plus the way we choose to named them).

A nearly concomitant and somehow related thread is What is the science behind Red light therapy? Infared and low spectrum EM waves sounds fancy to some but is it more than heat and a red light bulb

Higher photon energy does not, in general, mean higher penetrating power. Here's the opacity of the Earth's atmosphere versus wavelength: 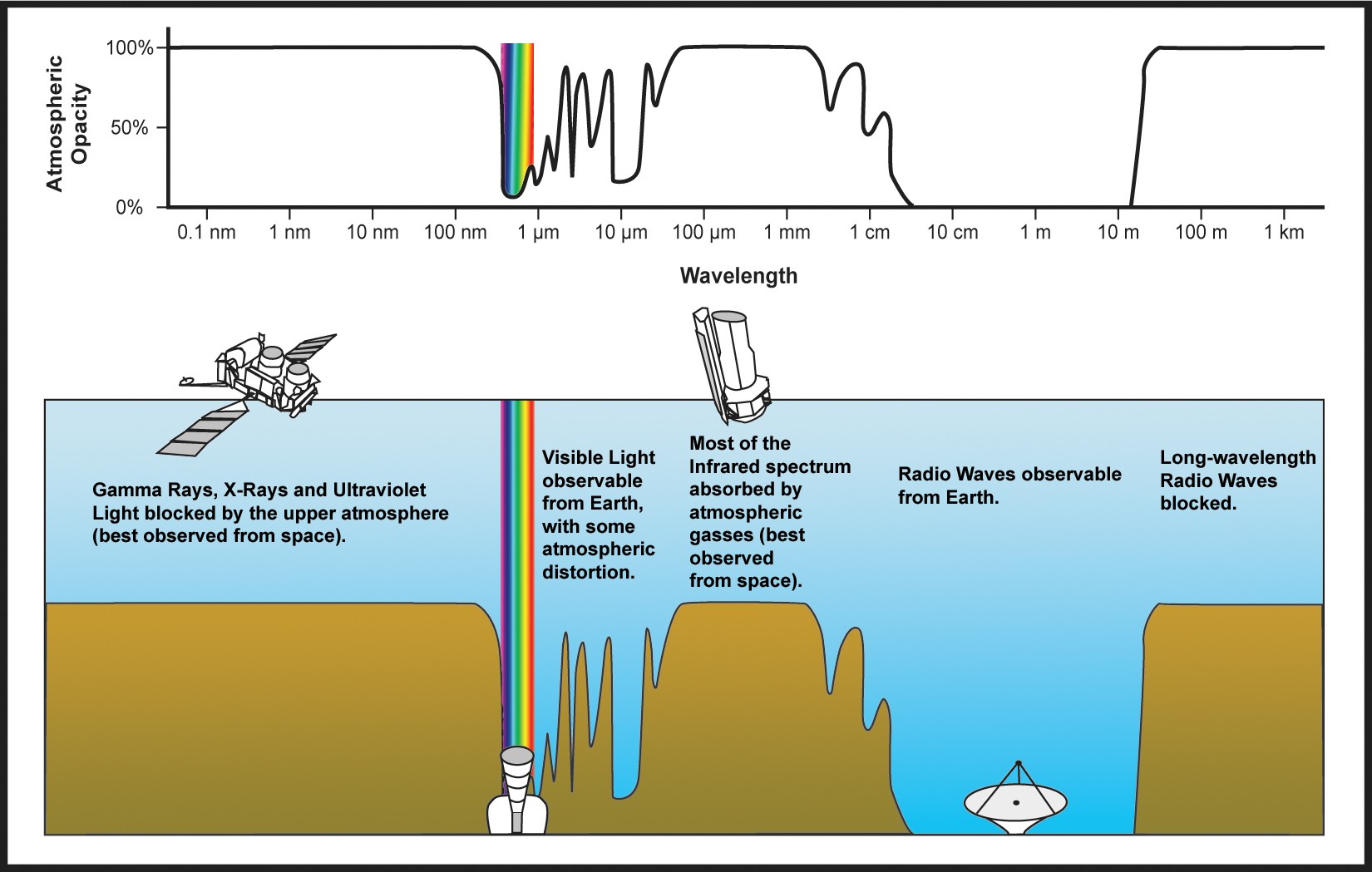 Different mechanisms operate at different wavelengths. Important mechanisms include pair production, Compton effect, photoelectric effect, bound-bound electronic transitions, molecular vibration, molecular rotation, and plasma waves. The widest window is in the radio, where the frequency is too high for the plasma to react, but the photon energy is too low to excite the other mechanisms.

Flesh is a much more complex mix of materials, so its opacity is correspondingly more complex.

Not the answer you're looking for? Browse other questions tagged waves electromagnetic-radiation visible-light microwaves or ask your own question.

4
What is the science behind Red light therapy? Infared and low spectrum EM waves sounds fancy to some but is it more than heat and a red light bulb

6
The energy of an electromagnetic wave
5
Why don't X-rays/Gamma rays ionize all the atoms at the surface of a material?
8
Why does glass absorb infrared light?
33
How can wifi penetrate through walls when visible light can't?
3
Wavelength and penetration by EM radiation
0
Why do black bodies in thermal equilibrium with their surroundings only emit in non-visible regions of the electromagnetic spectrum?
3
In electromagnetic waves, what exactly do changes in frequency and amplitude do?