Does the size of the mark a photon/electron leaves on a light sensitive sheet change with distance?

This video shows an electron detection event build up. https://www.youtube.com/watch?v=hv12oB_uyFs

When firing photons or electrons at a light sensitive sheet (or whatever types of detectors are used), whether directly or through a double slit, does the size and density of the marks the photons and electrons leave on the sheet, change with distance?

For instance if the sheet is closer, will it leave larger and/or more intense marks than if you moved it much farther away? Or is the size/density/intensity the same regardless of distance - 1 foot, 10 feet, a mile, etc.? If there is a difference based upon distance, what is the equation/formula/mathematical relationship that governs this?

does the size and density of the marks the photons and electrons leave on the sheet, change with distance?

Size and density are two different things. The size is a particle property that is fixed. In the video you linked, the size of each blip is independent of whatever distance you place the detector at.

The same can’t be said of density though. The density of the blips is a measure of probability of detection in a certain region. Think about this, you have a diverging beam of light (equivalently electrons) using a lens. Then you know that the beam diameter depends on where you place the detector. 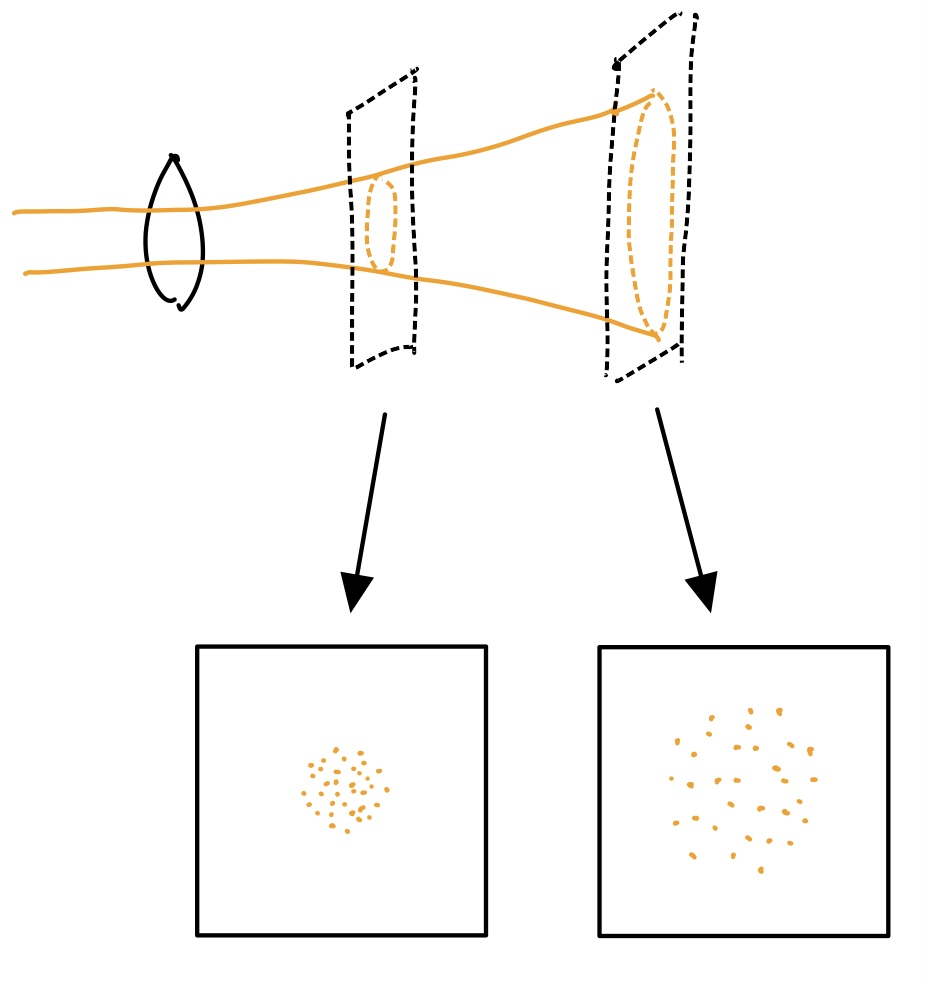 But since energy has to be conserved, the number of photons (electrons) detected in a cross section should be conserved. So a bigger diameter will have lower density of detection compared to a smaller diameter.

Seems like I misunderstood what you meant by density.

by "density", I actually meant the density/intensity of the individual blips, not the overall pattern of blips

This depends on the kind of detector you are using. If you use a detector like photographic plates where images are formed by particle energy being deposited, then like @BillAlsept said, the size and depth (your density) will depend on how fast the particle hit the plate. If on the other hand you use a camera (like CMOS) then each blip is identical.

Not the answer you're looking for? Browse other questions tagged visible-light photons electrons double-slit-experiment or ask your own question.

2
Questions About The Delayed Choice Quantum Eraser Experiment
1
photon electron interaction such that the photon energy does not correspond to any state change
13
Numerical simulation of the double-slit experiment including watching the electrons
1
Does the probability that an electron absorbs a photon change with the distance between the two?
3
Do photons emitted from different color filters leave varying size marks on a screen when fired?
0
How does the photon detector in this experiment work?
1
Is my understanding of the double-slit experiment correct?