In terms of order of magnitude, how does a the energy consumption of a typical mammalian neuron (in the brain) compare with the state of the art MOSFET?

When you read it note that power is measured either in Watts or ATP/sec. ATP, or Adenosine TriPhosphate is the molecule that stores energy in cells. An ATP is the amount of energy liberated by removing a phosphate group.

More surprisingly, the power consumption of a MOSFET isn't as simple as you might expect. And not all MOSFETs are created equal. Some are intended for high voltage switching power supplies. Guide to MOSFET Power Dissipation Calculation in High-Power Supply gave an example power supply where the dissipation is $1.23 W$.

But you are probably thinking of a transistor used in a computer. I found an unsupported rough estimate in If every transistor in a modern CPU was replaced with an old vacuum tube, how much power would that CPU take? that the power of a transistor is

As Joao Mendez pointed out, power consumption is directly related to clock speed. This is because most of the power is used while switching between 1 and 0. This is the limiting factor of clock speed. Too much power consumption means raises the temperature of the chip too high, even with good cooling. Also, for mobile devices, it drains the battery more quickly.

Keep in mind that a brain and a computer achieve immense computing power in completely different ways. 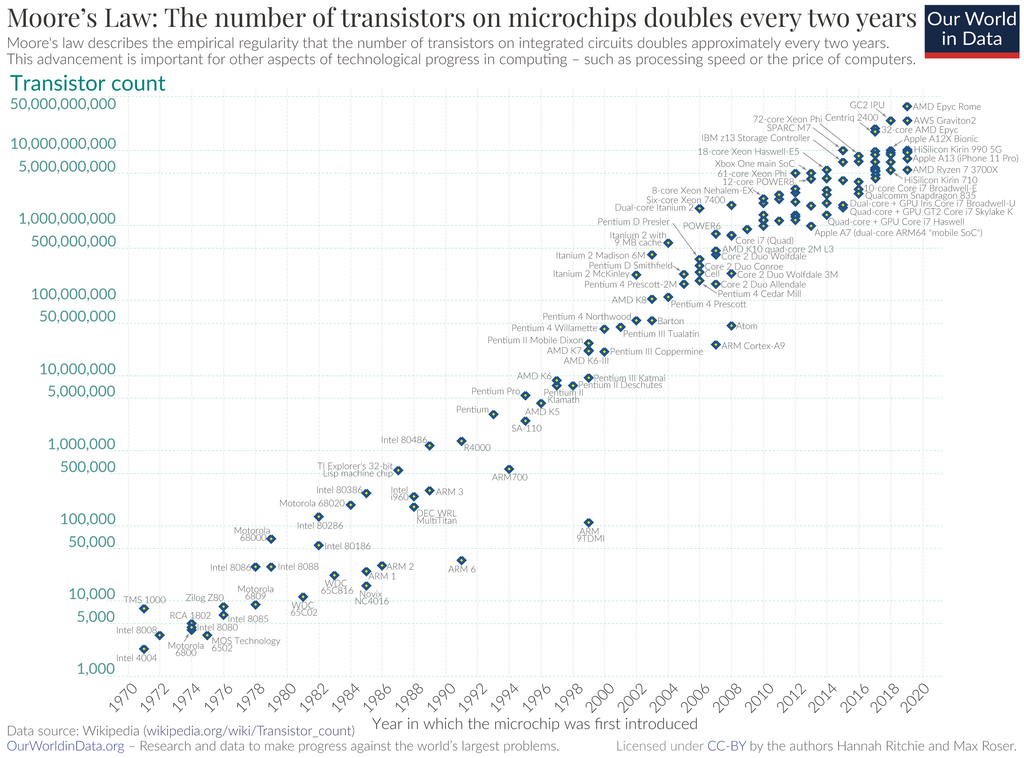 On the other hand, a brain has about $10^{11}$ neurons Are There Really as Many Neurons in the Human Brain as Stars in the Milky Way?. It also has about 3 times that many glial cells, Neuroglial Cells. It has what might loosely be called a "clock speed" of about $ 5 - 80$ Hz, What is the clock speed equivalent of the human brain?, and is massively parallel.

MP 2Ring, Joe, and Stephan Matthiesen point out that a neuron has many dendrites, is much more complex than a transistor, and therefore a more powerful computing element. This is true, but a transistor is much faster and can do many operations in the time a neuron can do one.

I have no good way of defining computing power that would apply to both, and much less hope of comparing them. A brain and a computer each can do things the other can't touch. Anything simple, like comparing clock speeds and dendrite counts, is surely misleading.

This doesn't directly answer your question, but I think this article gives a good feel for just how much more complex a single biological neuron is than an individual node in an artificial neural network. In the paper cited in the article, they need a network with 1000 nodes to model a single biological neuron, and even then they say that the biological neuron is probably more complex than this. To compare this to your question you'd need to then have some kind of a measure relating the complexity of a single transistor with that of a node in a neural network; I doubt you can just say that each node corresponds to $x$ transistors, but surely the nodes are a lot more complex.

So, maybe you have some other motivation for asking this question. But if you're imagining the functioning of transistors in a CPU and that of neurons in the brain as being somehow analogous and then trying to make a direct comparison based on this, then I don't think this comparison is very useful.

My Intel Core I5 CPU and the human brain use comparable amounts of energy (order of magnitude: 100W).

My brain has about 60 times as many neurons, as my CPU has transistors.

Therefore, each transistor uses about 60 times the power of a neuron.

This is, of course, a meaningless comparison - a cup of sand has about 15 million grains of sand, and draws no electricity at all, so "uses 100% less power than either neurons or transistors".

Neither a neuron, nor a transistor, has any calculating power on it's own.

Have you noticed that revising for exams, or other intense intellectual work, makes you hungry? The human brain burns up to about 100W. At some jobs e.g. face recognition it is far more energy efficient than computers. At others though e.g. adding thousands of numbers computers win.

You really can't meaningfully compare the energy consumption of neurons and transistors. Quite apart from the fact that it takes a fairly powerful CPU to do a real time model of a neuron (to the degree that we can even model the full complexity of one), they are fundamentally different.

Transistors are electronic devices. They use power only when they are computing something. Shut your computer off, and the CPU consumes zero power. Neurons are living cells: they consume energy just by being alive, in order to be alive in the first place. The energy consumption difference between active thinking and not is miniscule, if it exists at all.

Not the answer you're looking for? Browse other questions tagged semiconductor-physics electronics biophysics order-of-magnitude efficient-energy-use or ask your own question.

3
Estimation of the internal electric field strength in the pn-junction
0
Order of magnitude
3
Are all heaters exactly as energy efficient as each other?
3
Power consumption of a qubit?
2
What is the point of generalizing a more specific result to an order of magnitude?