Do all hadrons experience the strong nuclear force?

In nuclear physics, nuclear force, also known as the residual strong force, is mediated by pions exchanged between protons and neutrons. It doesn't seem like this should be limited to protons and neutrons, though, since the mechanism by which pions are exchanged comes up from the fact that protons and neutrons are made of quarks. Would hadrons with quarks other than up and down quarks and antiquarks exchange more exotic mesons?

the residual strong force […] is mediated by pions exchanged between protons and neutrons.

This is a pretty big oversimplification of the strong nuclear force. The pion, as the lightest member of the meson spectrum, can be associated with the longest-range part of the residual strong force. But if you’re also interested in the phenomenon that nuclear matter has constant density, you already have to go further up in the meson spectrum than the pion to find a repulsive interaction. In many-body systems or in high-energy interactions, the meson-exchange picture rapidly stops being a useful way to make quantitative predictions.

Your question about “all hadrons” suggests you are also curious about long-range interactions between mesons. That’s basically impossible to measure directly, because all mesonic hadrons are short-lived. It’s one thing to build an accelerator that makes a beam of pions or kaons; it’s a different thing altogether to make two such accelerators and point the beams at each other. Beam-beam interaction experiments, like the Large Hadron Collider, make use of stored beams of stable particles. (A possible exception was a neutron-neutron scattering length measurement which used the simultaneous detonation of two nuclear bombs in the same underground cavity. Its results were never published; I have heard variously that a blast door failed and the DAQ was destroyed, that the experiment was proposed but never attempted, and that the whole thing is an extremely niche urban legend.)

To the extent there are residual meson-meson interactions, virtual mesons will participate in them as well, and those meson-meson interactions show up as modifications to your model of the meson-mediated nuclear force. That recursive relationship gets messy fast. For a taste of how complicated it is, look for literature about whether the “fictitious $\sigma$” (renamed $f_0(500)$ in the current PDG) is a “real” meson or a two-pion bound state.

Long-lived baryons absolutely participate in the nuclear force, illustrated most clearly by hypernuclei made of protons, neutrons, and exotic baryons. (In practice there’s just one hyperon, for the same reason as the absence of meson-meson colliders.)

For short-lived baryons, it’s not clear whether the meson-mediated approximation would be useful under any circumstances. The effective range of the pion-mediated force is related to the pion’s mass:

An unstable state with lifetime $\tau$ has an intrinsic uncertainty $\Gamma$, or width, in its total energy,

which you can think of as a kind of energy-time version of the uncertainty principle. If we use $\hbar = c = 1$ units so that energy, mass, (inverse) time, and (inverse) distance are all measured in the same units, you might say that a particle whose decay width is larger than the pion mass, $\Gamma > m_\pi$, will probably have already decayed in the time it takes for light to cross a nucleon. It’s not clear (to me) what it would mean to “interact” with a particle which has already decayed before you finish touching it.

The strong nuclear force is a residual force from the Quantum Chromo Dynamics (QCD) force, one of the three basic forces in the Standard Model, SM, of particle physics.

The strong residual force is analogous to the Wan der Waals, WW, forces in the solid state of atoms. In quantum mechanical terms:

Do all hadrons experience the strong nuclear force?

To try to explain fundamental quark interactions in terms of the pion exchange model used in nuclear physics is futile. See what the nuclear force is in feynman diagrams of the quark content of the nuclear interaction of a proton with a neutron in the nucleus in terms of quarks and gluons. 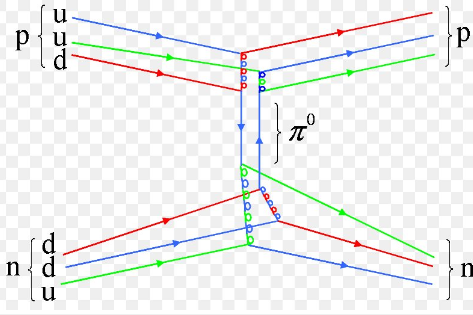 The pion exchange model comes from a different simpler Quantum Field Theory, QFT for nuclei, example., which ignores the quarks and concentrates on protons , neutrons and various mesons for the exchanged particles in the Feynman diagrams.

All hadrons experience the strong force: that's more or less what defines them. In particular, it's the residual kind. The coupling constants to specific gauge mesons might vary by species (I'm not a QCD expert), but qualitatively they behave the same.