The experiment for testing the CHSH inequalities

I want to understand how an experiment is carried out to test violations of the CHSH inequalities. I read Wikipedia and one popular book on quantum mechanics. The Wikipedia article is too short and incomprehensible to me; in addition, the description from Wikipedia and from the book is different.

The figure in the book is the following: 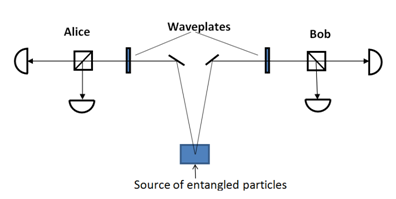 In the book, the picture shows the waveplates in front of each PBS, and it says “these plates are set at angles 0, Pi/8, Pi/4 and 3Pi/8”. Wikipedia says “Four separate subexperiments are conducted, corresponding to the four terms E(a, b) in the test statistic S (2, above). The settings a, a′, b and b′ are generally in practice chosen to be 0, 45°, 22.5° and 67.5° respectively — the "Bell test angles" — these being the ones for which the quantum mechanical formula gives the greatest violation of the inequality”.

I tried to read the original work of Clauser et al, there are no pictures and everything is not clear to me too. I ask you to advise popular sources that clearly describe the essence of the CHSH inequalities and the experiment to test them.

Browse other questions tagged quantum-mechanics experimental-physics or ask your own question.

23
How do we know that entanglement allows measurement to instantly change the other particle's state?
5
What exactly does $S$ represent in the CHSH inequality $-2\leq S\leq 2$?
6
Where is locality used in CHSH/Bell's inequality?
4
Simplified Derivation of CHSH/Bell inequalities

5
How would you design an experiment to grok optical phenomena?
4
Why is $\frac{\pi}{8}~\left({22.5}^{\circ}\right)$ often selected as a Bell test angle for the CHSH inequality?
3
What makes Bell's original inequality unsuitable for experiments?
0
Signal photon patterns in the Delayed-Choice Quantum Eraser experiment of Kim et al
2
Is there a class of Bell inequalities that are violated by certain mixtures of known orthogonal entangled states?