Why can't a single photon pass through a slit if it is perpendicularly (relative to the slit) polarized?

I have read this question (in the comments):

That's why photons of microwave frequencies can't escape from the microwave, either. But the interpretation is different: the wave function isn't directly measurable like the electric fields. Instead, it encodes (after squaring) the probability density that the photon is here or there.

If photons move linearly, what's actually stopping them from passing through a microwave oven mesh? 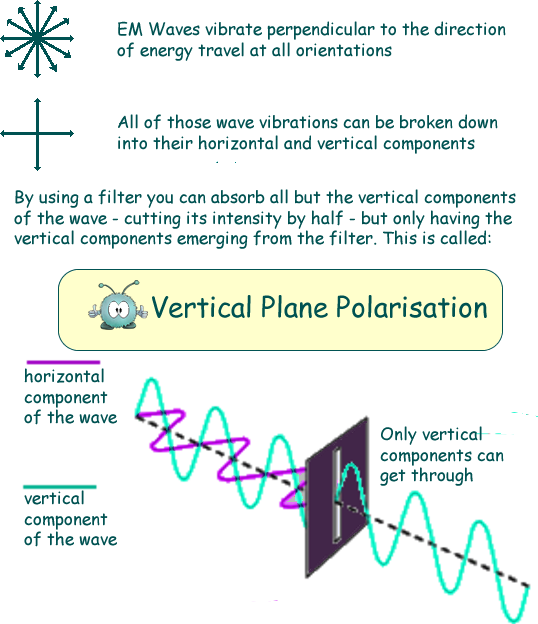 Now as far as I understand, photons are defined as elementary point particles in the Standard Model. I do understand that a large number of photons build up the classical EM waves in a very nice way.

Nowadays we do have single photon emitters, and if such a device emits a single photon towards a slit so that the photon is perpendicularly polarized (relative to the slit), then will the photon pass or not?

Now the image above explains the filter (polarizer) as where only parallel components get through, and perpendicularly polarized components do not get through.

I do not really understand this explanation in case of a single photon, since it is an elementary particle, and, even though it shows wave properties, it should not have parallel or perpendicular components (or constituents).

So basically, if a photon is an elementary particle, and does not have any components or constituents, then how can we state that it will not pass through the slit (if it is perpendicularly polarized)?

I do understand that slits can stop photons based on their wavelength, that is, for example in the case of a microwave mesh. But this example is not about wavelength, but polarization. How can a slit stop a photon just based on polarization, if the photon is elementary, and does not have for example vertical and horizontal components?

The last one says that single photons are described by the wavefunction, that isn't directly measurable like the EM fields (so it does not have vertical or horizontal components), but rather it describes the probability of finding the photon in space. But if the single photon is described by the wavefunction (and does not have vertical or horizontal components), then the slit should not be able to stop the photon based on polarization.

"I do not really understand this explanation in case of a single photon, since it is an elementary particle, and, even though it shows wave properties, it should not have parallel or perpendicular components (or constituents)."

This is false. A single photon is an excitation of the electromagnetic field, which certainly has parallel and perpendicular components. It is absolutely not a point particle. Famously, photons have spin 1, which makes them a vector particle that has orientation in space.

So, a priori, there is no reason why an experiment like this, which is designed to detect the spatial orientation of a photon, wouldn't work. Photons have orientation, whether it is one or a whole beam of them. They are made out of electromagnetic field, after all.

Although the image is drawn as a slit, the captioning more properly calls it a "filter". Polarizing filters are not slits.

Just because it is an elementary particle does not imply that it doesn't have perpendicular components. In this case there is an electric field associated with the photon, and that field has an orientation.

Polarizing filters preferentially interact with electric fields in certain directions and not others. The orientation of the photon's electric field therefore describes the probability that the filter will absorb it.

From a thermic source photons get emitted in a unpredictical way. The only thing you observe is an energy transfer to another body or your measurement instrument.

From photons, emitted from an antenna, are polarized. All electrons synchronous get accelerated forth and back and the emitted photons have an electric field component parallel and also periodically up and down orientated. And you are able to measure thom this bunches of photons their common magnetic field. It is oriented perpendicular to the electric field and periodically with and again the clock.

„Why can't a single photon pass through a slit if it is perpendicularly (relative to the slit) polarized?“

The photon has an observable radius of action. If the slit is to small no photons of a given energy content can pass the slit. If the slit is an opening, the photons in the middle of the opening are passing through without any disturbance and only at the edges of the opening the diffraction of photons takes place.

The interaction is explainable by the electric fields as was pointed out in another answer. So a single photon does not pass through the slit if its electric field is oriented in a way, it interacts with the walls of the slit and get blocked.

The explanation in the picture uses a mechanical wave on a string as an easy to understand analogy, not as a description of an EM wave. A photon polarized perpendicularly to the slit will pass easily there. It's more likely to be attenuated if it's polarized along the slit (if the slit is conducting), due to the interface conditions requiring the $\vec E$-field to vanish at the sides of the slit. This effect is used in wire grid polarizers.

Everyone talks about duality but they never seriously consider a photon as a particle. Maybe on impact but never during propagation. If you truly consider a single photon propagating through space with a frequency then you can begin to picture what’s happening. Imagine the photons energy oscillating through maximum and minimum amplitude’s, at a certain frequency, as it propagates. Now imagine those maximum amplitudes expanding along a certain polarization. This model will answer both questions about being perpendicular to the slit or transmitting through a mesh. With the microwave oven you need to think linearly, where the oscillating max amplitude of a photon, polarized in any direction is stretched out (longer wavelength) so that it always makes contact with the Mesh. See “Single Edge Certainty” at billalsept.com

7
What do photons look like?
20
What exactly is meant by the wavelength of a photon?
10
If photons move linearly, what's actually stopping them from passing through a microwave oven mesh?