Observing light from a falling elevator

Today in my physics class, my teacher said that if one would point a laser into a falling elevator (acceleration because of a gravitational field), an observer inside the elevator would see the light form like a parabola, like i have tried to illustrate here: 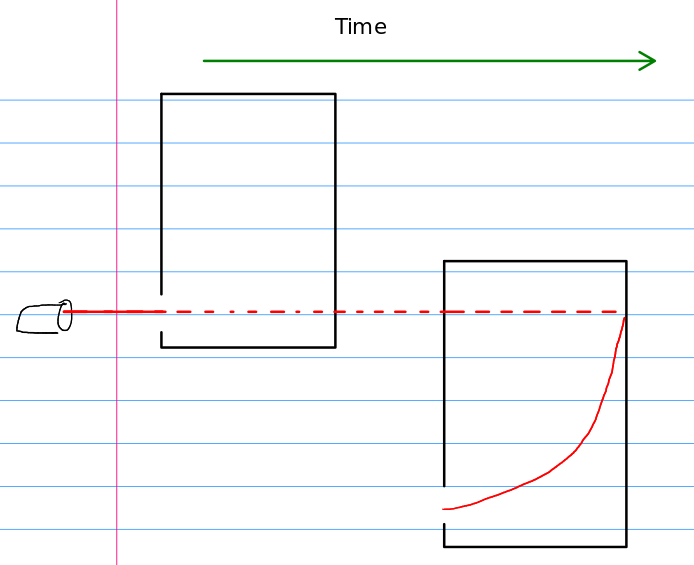 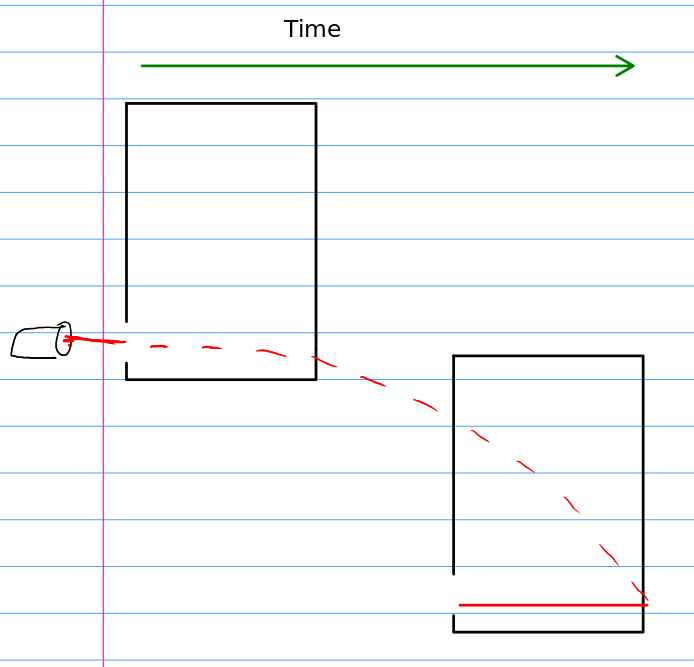 My question is now: who is right? Will the light accelerate at the same rate as the elevator, or what will happen?

By the way, this is my first question on the physics stackexchange, so please tell me if i could improve my question, thanks!

You are right; teacher was a bit misleading but not totally wrong.

Proof: motion under gravity satisfies a principle called the Strong Equivalence Principle. This says that in a reference frame in free-fall physics is locally just the same as if there were no gravity at all and you had a reference frame in constant velocity motion. In such a frame light travels in a straight line.

Your elevator falling under gravity is an example of a reference frame in free-fall. Therefore relative to the elevator light travels in a straight line.

Relative to the Earth the light beam bends down owing to gravity, and the bend is exactly enough to make it be a straight line relative to the elevator. You can use this to deduce the bend of a light beam owing to gravity! Congratulations: you will then have done an exact calculation in general relativity. (If you do the calculation you will find the bend is very small; the radius of curvature of the light beam track relative to Earth is something like a light-year).

Added remark on direction of the light

If you shine a light beam into something that is moving relative to you (e.g. shine a torch into the window of a passing train) then there is a slight change of direction, just as you would expect from Newtonian physics. e.g. If the light beam is at right angles to the moving window surface in your rest frame, then in the train frame the light beam is not at right angles to the window surface. This affects the elevator experiment too, only now the relative velocity between laser and elevator is increasing so this effect gets larger as the elevator falls. The light still propagates in a straight line relative to the elevator, but its direction of travel will be changing (assuming the laser is fixed relative to Earth). (Thanks to PM2Ring for pointing this out.)

If the elevator is in outer space without gravity or any acceleration, the light goes straight.

If it is in outer space, without gravity, but accelerated by some engine, the light bends to the opposite direction of the acceleration. By the equivalent principle, the same happens to an elevator at rest on the surface of Earth. The light bends downwards.

For a free fall elevator, under Earth gravity, due to the same equivalent principle, the light goes straight as in the first case.

There is an ambiguity in what is meant by the path of the light.

If you mean the path of any particular photon (i.e., the light emitted at a given time), then your picture is right: This path is straight in the elevator frame by the Einstein Equivalence Principle. However, it is horizontal only if it was emitted at the moment the elevator was at rest relative to the laser. Otherwise, it is tilted because the velocity of the photon has a vertical component in the elevator frame.

If you mean the instantaneous locus of all photons in flight (i.e., the light existing at a given time in the elevator frame), then this path bends downward in the elevator frame -- opposite to the picture you attribute to your teacher. This may be counterintuitive, but consider the elevator after it has been falling at acceleration $-g$ for a time $T$ since being at rest relative the laser. Assume the vertical velocities involved are small compared to $c$, so the horizontal velocity of light is essentially $c$ (up to higher-order terms). In the elevator frame, the photon at horizontal coordinate $x$ (the laser is at $x = 0$) was emitted at time $\tau = T - x/c$, when the laser was at vertical position $+g\tau^2/2$ and had vertical velocity $+g\tau$. Thus the photon, after traveling in a straight line for time $x/c$, has current vertical position $g\tau^2/2 + g\tau(x/c) = g(T^2 - x^2/c^2)/2$. This is a downward-bending parabola. The same effect would be seen in Newtonian physics with, say, a hose emitting water or a machine gun emitting bullets.

Note that the above "paths" are defined in terms of the reference frame of the elevator (notional grid of clocks and rulers), and for the case of light, neither of these paths would be straightforward to observe by what someone naively (optically) sees in the elevator. For example, if there is smoke that scatters the light so it can be seen from elsewhere in the elevator, the instantaneous appearance of the light beam would not correspond to the second interpretation (locus of all photons in flight), because of the differing time for propagation to the observer's eye from different parts of the beam.

Not the answer you're looking for? Browse other questions tagged special-relativity gravity speed-of-light or ask your own question.

0
Does gravitational differences affect the distance light travels? (a thought experiment)
14
Effect of gravity upon light and bagels
0
Observing light speed
1
Practical limit of equivalence principle
3
Why is there "red/blue shift" instead of "light/dark shift"?