Where is the wormhole in a Schwarzschild geometry?

I am new on wormholes and in my understanding, an interpretation of a wormhole connecting two "universes" can be obtained by doing coordinate transformations on the Schwarzschild metric.

I am following Harlows notes (sec. 2) where he starts reviewing the Schwarzschild black hole solution which most people are familiar with:

As I understand it, these coordinates can describe more spacetime around the Schwarzschild black hole. What does not really sit well with me is where the wormhole comes into the picture? How do we know that wormholes are not just an artifact of playing around with coordinates?

I also have the main follow-up questions I would love some input on.

If there are two "external spacetimes" that can be interpreted as a wormhole, where exactly is this wormhole? Is it like a hyperboloid "laying on top" of the black hole?

If a particle approaches the back hole, is there a chance that it instead enters the worm hole and "escapes" the black hole? In this particular case the worm hole is non transversable so I guess the particle gets stuck in the middle of the wormhole but still, can it rest there instead of falling into the singularity?

I am sure the below Penrose diagram actually has all the answers I am looking for, since it is supposed to tell me the faith of particles coming in from different places, the problem is that I am not fluent in Penrose diagrams yet so I find it a bit hard to encode. 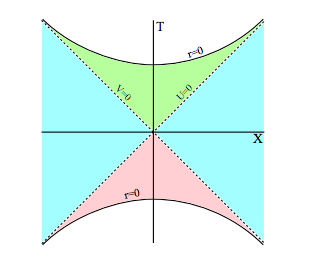 The wormhole is just an artifact, not of the coordinates but of ignoring the matter whose collapse made the black hole. When the Schwarzschild geometry is used as the exterior of an ordinary gravitating object, only part of the right (blue) region is used; the object itself has a different geometry. When the Schwarzschild geometry is used for a black hole, only part of the blue and green (upper) regions are used; the collapsing object (which always exists in spacetime, even if not "in space") has a different geometry. If you could somehow move faster than light and tried to enter the wormhole, you'd just hit the collapsing object.

In the full geometry, if you head in really fast (faster than light), then instead of hitting the collapsing object, you end up in a time-reversed second half of the vacuum (time reversed only in its shape, not in the sense that anything happens backward there). I don't know how to visualize the full geometry, but the +X axis of the vacuum solution, with one angular coordinate suppressed, looks like this:

Realistically, even in a black hole, that's joined to some geometry representing the interior of the collapsing object, like this: 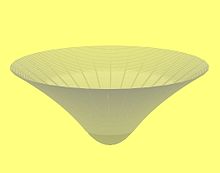 But if you don't add that part, and just extend the vacuum part, then because the vacuum part is a paraboloid of revolution, it ends up looking like this:

All worldlines on that surface are spacelike/tachyonic. So if (a) you could move faster than light and (b) the black hole didn't form from a collapsing object but had just existed forever, then maybe you could reach a second exterior region.