Why can basis vectors change direction?

I thought that basis vectors were of magnitude one and located at the origin and were each linearly independent, so how in things like polar coordinates can the basis vectors be moving?

In each tangent space, we can construct a set of basis vectors from the coordinates called a holonomic basis. These vectors are linearly independent and span the tangent space at the given point in the manifold. So in that sense they are each at the origin of a different vector space.

The short answer is: Because there is a separate vector space with a separate basis at every point of space and you can choose a basis for each of theses vector spaces independently.

To understand this properly you need the theory of manifolds (as explained in Dale's answer).

It is just an "accident" of Euclidean space that vectors don't change when you transport them around. We can identify all the vector spaces at all points and choose a single basis for them in Cartesian coordinates because of this accident.

This picture is static. However, by choosing a curve on the manifold and sending a particle moving along this curve we see we have a moving choice of basis along the curve. This is the basis of Cartan's method of the moving frame where frame is just a synonym for basis.

In polar coordinates, each point has a set of basis vectors, and any vector acting in the point is a linear combination of them.

It is easy to understand for a point in the earth surface. It is defined by 2 coordinates: longitude and latitude. For each pair of that coordinates, we can set 2 vectors: One of them pointing North and other East for example. Now it is possible to define a velocity vector with a magnitude and a direction, based on these basis vectors for a neighborhood of that location. 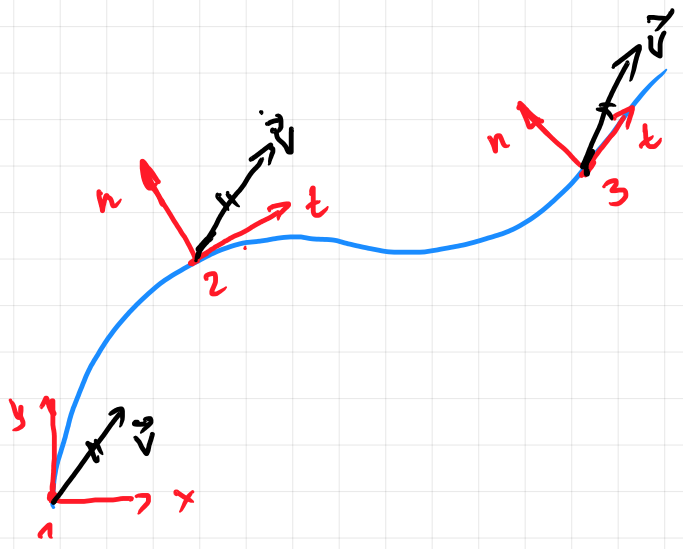 the new components are

at point 3 you obtain another components of the vector $\vec v~$ , again the magnitude is unchanged.

so nothing is wrong with this calculation ,choosing the basis vectors is only depending on what you want to achieve

I thought that basis vectors were of magnitude one

Consider what it means to express the same point two different bases.

Suppose you have the canonical (standard) basis $B = \{\hat I, \hat J\}$. Take some arbitrary pair of space-spanning (so, linearly independent) vectors $\vec i$ and $\vec j$ (not necessarily orthogonal, and not necessarily of unit length) and have them form a different basis $B' = \{\vec i, \vec j\}$.

Aside: Commonly (in a slight abuse of notation), you'd write an ordered basis as $B = \{e_1, e_2\}$, with the subscripts defining the ordering (so that you know which coordinate is associated with which basis vector). Since I'm using $I, J$ and $i, j$, there are no subscripts, but the usual ordering is assumed (dictionary ordering, $i \to j$).

Now, suppose you have some vector $\vec r$. Expressed in the standard basis, it's a linear combination of the basis vectors in $B$:

and in terms of the primed basis, the same vector can be expressed as a linear combination of $\vec i$ & $\vec j$, it's just that the coordinates will be different. So, in terms of $B'$, it's:

It's basically saying "take $u$ steps in the $\vec i$ direction, and take $v$ steps in the $\vec j$ direction". Note that this means that the $(u, v)$ coordinates of $\vec i$ and $\vec j$ in the primed basis are $(1, 0)$ and $(0, 1)$, respectively. So, expressed in their own basis, $\vec i$ & $\vec j$ are both of unit length, and orthogonal. Basically, working in terms of (u, v) coordinates is the same as working in the standard basis, it's just that there's this larger context, a coordinate-independent space of points, and the concrete point associated to each coordinate pair is different depending on which basis you choose.

The neat thing is that this lets you convert between the two. Suppose that 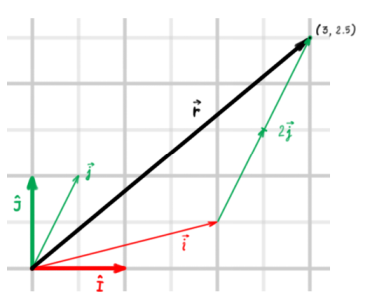 I thought that basis vectors were [...] located at the origin [...], so how in things like polar coordinates can the basis vectors be moving?

Mathematically, vectors don't have distinct origin points - they are just a direction and a magnitude (geometric vectors, anyway). You can visualize this by thinking of all vectors as emanating from the origin of a Euclidean coordinate system; the endpoint then corresponds to the coordinate representation in the standard basis.

In other words, even things like velocities, accelerations, forces - all these by themselves don't have an intrinsic origin point. Each is, really, just a direction and a magnitude. This makes the math work out. But in physics, you often want to attach an extra bit of "metadata" to such vectors, to better describe the bigger picture (beyond just the "mathematical tooling" of linear algebra), so you often translate the vector in space so that it starts at some sensible-looking point on an object.

Or, think about force fields; to each point in space, a vector (force) is attached. The vectors are often represented as emanating from the associated point. But, another way to think about this is that you have a function that takes a point in space, and produces a vector. So, imagine some application that provides UI that lets you select a point as input, and that has a separate window to show the output vector emanating from the origin; as you move the input point around, the output vector changes magnitude and direction. You can get back to the usual picture by mentally translating the vector to the input point.

You can do the same thing with coordinate frames. A problem may be difficult to solve or express in the standard basis, and easier to deal with in some other (primed) basis. The new basis vectors do emanate from the origin, but the primed basis itself is often associated with some point in space - perhaps it's only useful at the immediate vicinity of that point (good enough for calculus!).

So you can think of it as of a local frame associated with that point.

As you change the "input" point, the associated basis changes - the basis vectors change direction and magnitude. In essence, you have a different local basis for each point in space. But because directions and magnitudes vary smoothly, you can think of the process as of a local basis "moving", "rotating" and more generally, "changing shape".

"Coordinates" is a more general term that "basis vectors". Basis vectors apply only to vector spaces, while coordinates apply to any manifold (and, if one uses the term loosely enough, pretty much any space). Basis vectors provide a coordinate system by simply taking their coefficients, but not all coordinate systems correspond to a set of basis vectors. Also, while basis vectors do have to be independent, they do not have to have magnitude $1$, and in fact vector spaces do not have to have any norm at all to have basis vectors, and if a space doesn't have a norm, then "magnitude $1$" is meaningless. Additionally, vectors aren't really "located" at the origin. The are often represented as displacements from the origin to another point in affine space, but that's not quite the same thing as being "at" the origin.

Polar coordinates are not based on basis vectors, although we can use them to define local basis vectors for each point.

Not the answer you're looking for? Browse other questions tagged classical-mechanics reference-frames coordinate-systems vectors or ask your own question.

2
Change of basis vs. change of coordinate system
3
Understanding the definition of tangent basis
0
Magnitude of basis vectors in Kerr metric
4
What's the physical meaning of the standard base vectors?
1
How do we properly define a coordinate system, in particular its relation to vector spaces?
0
Expressing cartesian unit vectors in terms of plane polar unit vectors to prove that former doesn't depend on position
1
Can someone help me understand polar coordinates 2D better?
2
Why do the tangent vectors of coordinate curves correspond to the coordinate basis vectors?
1
Why do basis vectors transform covariantly?
0
Adding equal and opposite vectors in polar coordinates without transforming into cartesian