Why the heat flux vector at a point must be perpendicular to the temperature isothermal surface? Is it a definition or a deduction?

Before the question: I am working on numerical calculation of three dimension parabolic equation that based on Fourier's Law of which I am a little confused.

"The local heat flux is proportional to temperature gradient" $$ \vec{q}=-k\nabla T, $$ where $k$ is the material's conductivity.

How extremely concise it is, but how to understand the Law? I read the book written by Fourier in 1822 but I know neither of the law in modern mathematics language nor in Fourier's language. I found that every statement or formula related to proofing the Law are not done with rigour enough. Here is some statement from a book by YUNUSA.CENGEL on its page 65 chapter 2.

To obtain a general relation for Fourier's law of heat conduction, consider a medium in which the temperature distribution is three-dimensional. The figure below shows an isothermal surface in that medium. The heat flux vector at a point $P$ on this surface must be perpendicular to the surface, and it must point in the direction of decreasing temperature. If $n$ is the normal of the isothermal surface at point $P$, the rate of heat conduction at that point can be expressed by Fourier's law as $$ \dot{Q_n} = -kA\cfrac{\partial T}{\partial n} $$ 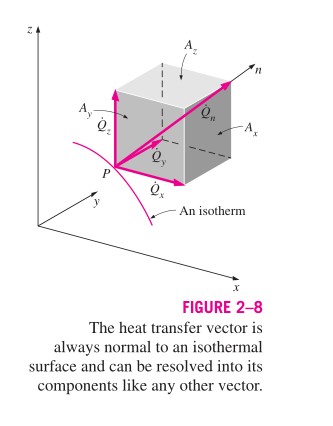 My questions toward the issue I have mentioned are

You might say it is true just because of the Second law of thermodynamics.

The heat always flows spontaneously from regions of higher temperature to regions of lower temperature, and never the reverse, unless external work is performed on the system.

It is lower but not fastest decrease, isn't?

If the direction is not through the line in the tangent plane of the isothermal surface it would transfer to a colder palce, isn't? So why choice the normal line to be the heat flux direction since there is infinity line to the colder place. Maybe it is that project works when considering the other line! However, it is human beings not the nature define the direction of heat flux for convenient. Am I right?

It may be related with Fick's Law. I am not sure about the proof of three dimension situation.

Heat flux is a vector beceause it has a magnitude and a direction. Furthermore it has these properties in every point in space, which makes it a vector field. You can think of an analogy with the mass flux in a medium with inhomogenius density; diffusion will tend to equalize the denisty everywhere, so there will be specific motion of mass at every point determined by its imediate surroundings.

Actually, this is not even correct. The temperature gradient is normal to isothermal surface, which is a simple mathematical consequence of the local Taylor expansion $T({r}_0+\delta{{r}})=T(r_0)+(\partial{T}/\partial{r}) \delta r$. However, in general the heat flux is not local (i.e., the heat flux at a given point is not defined only by the local temperature and its gradient); but even if it is local, the heat flux is not in general collinear with the temperature gradient due to transport anisotropy, so the right relation is $\vec{q}=-\hat{\kappa} \nabla(T)$ where $\kappa$ is the heat conduction tensor. For example, in magnetized plasma the anisotropy of heat transport can be many orders of magnitude, and in a magnetically confined plasma the heat flux is usually not orthogonal to the isothermal surface but almost exactly along the surface (along the magnetic field line, to be exact).

However, if we assume isotropic transport (as the question seems to be implying) then the standard type of argument used for a diffusive process as in, e.g., the Wikipedia article https://en.wikipedia.org/wiki/Fick%27s_laws_of_diffusion explains why the flux is down the temperature gradient.

EDIT: To answer the new formulated questions, it's a basic principle of thermodynamics that heat flows from hot to cold bodies. The direction of the heat flux vector is precisely that. Therefore, it should be obvious why this vector is orthogonal to isothermal surfaces once we accept that principle. Fourier's law is just a refined statement of that principle which also tells us the relation between the magnitudes of temperature gradient and heat flux.

In a more complex situation, heat could flow in various directions. The heat flow $dQ/dt$ described in the above formula is to heat flux $\vec{q}$ as current $I$ is to current density $\vec{j}$ in electromagnetism. The temperature gradient then becomes $\nabla T$ in its most general vector form, where $\nabla$ is the gradient operator. We then have

Here's a clarification of the definition of flux

Not the answer you're looking for? Browse other questions tagged heat thermal-conductivity vector-fields or ask your own question.

4
Is heat flux density and heat flux the same thing?
2
Conceptual difficulty in understanding Fourier's Law of heat conduction
1
How could flux can be a vector and a scalar?
0
Why heat flow perpendicular to the isothermal surface?

2
Heat Equation Equalities
2
Conceptual difficulty in understanding Fourier's Law of heat conduction
4
Is heat flux density and heat flux the same thing?
0
conducting heat to infinity
1
Help me solve a heat conduction/emission transfer problem. Mathematica has failed me
3
Fourier's law and time taken for heat transfer?
0
How to calculate power transferred from a wire through conduction?
0
Why heat flow perpendicular to the isothermal surface?