How intense are gravitational fields, where we have been able to test General Relativity?

We say that the Standard Model of particle physics has been tested and validated up to energies of 10-13TeV. Similarly, have we been able to test the validity of General Relativity to very intense gravitational fields, and if so, can we quantify for how strong gravitational fields have we managed to do so? I am not asking about the quantization of GR.

Experimental/observational tests of general relativity can put on a diagram plotting these two quantities against each other, see for example (note that this diagram includes both past tests, and projections for future tests using LISA): 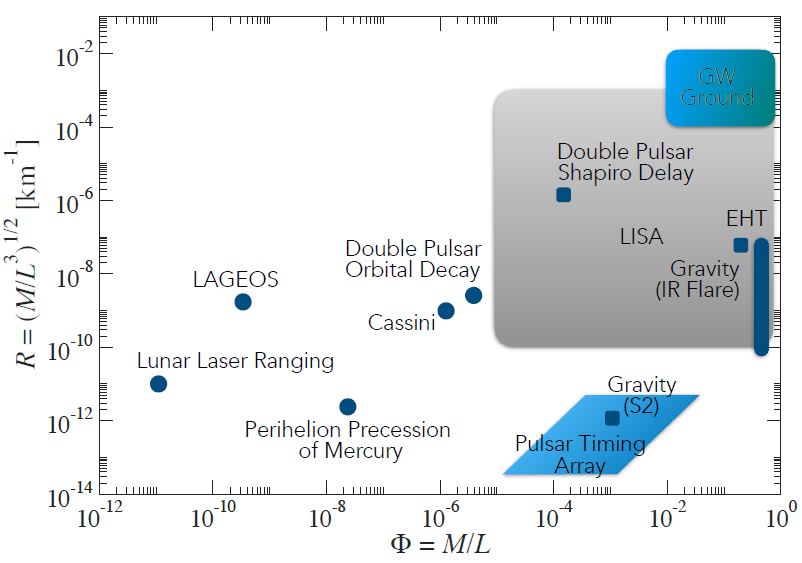 Observations of the event horizon by the event horizon telescope (EHT) probe similar potential depths $\Phi$, but because the imaged supermassive black hole is so much larger, the curvature scale $R$ is actually much smaller.

Not the answer you're looking for? Browse other questions tagged general-relativity gravity black-holes experimental-physics estimation or ask your own question.

4
How does this thought experiment not rule out black holes?
4
Do all of our discoveries of black holes in nature depend on the validity of GR?
5
Does general relativity fail in conditions with very large gravitational forces?
3
How does general relativity eliminate the Newtonian action at a distance? By the mediation of which "carriers"?
17
Do the Planck voltage and the Planck current have a natural physical interpretation in classical general relativity?
11
Are there aspects of General Relativity that have yet to be tested?
2
How to test quantum mechanics?