What happens if two capacitors having different charges is connected in series?

What happens if two capacitors having different charges is connected in series?

Resistors dissipate energy but not charge. If two charged plates are connected together, the total charge on the two does not change. If the wires (and plates) have no resistance, then connecting two charged capacitors can result in LC oscillations (depending on voltages and polarities). If two charged capacitors are connected together (with resistance) they will come to the same voltage. If they are connected in series to a cell, charge can flow from the terminals of the cell until the sum of the two voltages is equal to that of the cell; but the sum of the charges on the two connected plates must remain the same.

I will deal with case 1 after dealing with cases 2 and 3.

Cases 2 and 3 are essentially the same with case 2 having a voltage source with no output.
I think that the easiest way to illustrate what might happen is to do a numerical example which is shown below. 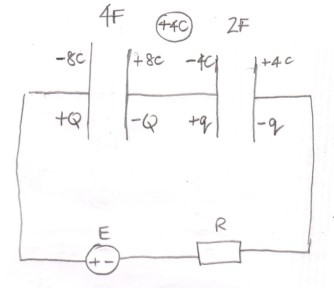 In the final state the charges of the capacitors are $Q$ and $q$. 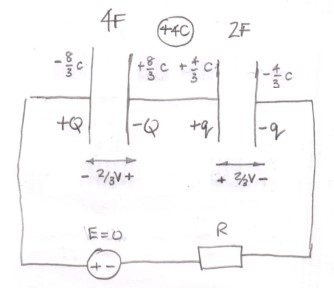 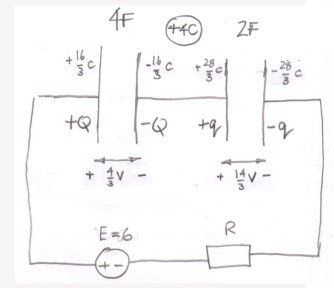 If you work out the energies stored in case 2 at the start and at the end you will find that there is a decrease in energy stored.
This is because to get from the initial to the final state some charge must have moved and if it moves through a resistor some of the stored energy is dissipated as heat.
There is therefore a problem if $R=0$ (case 1) as the circuit has no was of dissipating the energy.
A way forward is to look at what happens if $R\to 0$.

In all if the three cases it is in fact an capacitor, resistor and inductor (look at the loop in the diagram) series circuit but for most examples the inductance of the circuit is ignored and the circuit can be considered as heavily damped so the transition from initial state to final state follows an exponential function; remember what happens with a discharging $CR$ circuit.

Not the answer you're looking for? Browse other questions tagged electrostatics electric-circuits charge capacitance or ask your own question.