Why do rain drops fall with a constant velocity?

While reading my physics book. I came across a line that says that:

I was not satisfied by the explanation So I searched the internet which too had similar explanations:

The falling drop increases speed until the resistance of the air equals the pull of gravity, at which point the drop begins to fall at a constant speed, its terminal velocity.

Mathematically, the movement of a drop can be described as $$ \frac{d\mathbf{r}}{dt}=\mathbf{v},\\ m\frac{d\mathbf{v}}{dt}=m\mathbf{g} + \mathbf{F}_{drag}, $$ (for simplicity I neglect the bouyancy.) The drag force is directed against the drop velocity and can be modeled as $$\mathbf{F}_{drag}=-m\gamma\mathbf{v}.$$ Choosing our $y$-axis along the vertical direction and assuming that the initial drop velocity is zero, we have: $$ m\frac{d v_y}{dt}=-mg-m\gamma v_y\rightarrow \frac{d v_y}{dt}=-g-\gamma v_y $$ The stationary velocity can be obtained readily by setting the right-hand side of this equation to zero: $$ v_0=-\frac{g}{\gamma}. $$ The above differential equation can be also easily solved with usual methods as $$v_y(t)=\frac{g}{\gamma}(e^{-\gamma t}-1).$$ This equation describes a drop that starts with initial velocity zero, accelerates towards the earth, and eventually approach velocity $v_0$.

(the image is taken from this link)

The same phenomenon is often studied as a laboratory excercise in physics programs, where small balls are dropped in a viscous liquid, such as glycerol: due to high viscosity of the liquid, the ball quickly reaches its stationary velocity and then moves with a constant speed. E.g., see this video

Update
While the calculation above assumed that the drag force is linear in speed (see Stoke's law), quadratic drag is more appropriate for the actual speeds of raindrops (see Terminal velocity). See also discussion about the speed and diameter of raindrops, as well as the list of useful references on this page.

This is Newton's first law: if the force vanishes the velocity is constant. Constant but not necessarily zero.

The resistive force increase as long as speed increases. When it is equal to the gravitational force the speed no longer increases and the total force vanishes leading to constant speed.

If the net force is zero, it means the body continues to be in a state of uniform motion (Newton's first law or the Law of inertia). When it attained terminal velocity, the net force on the droplet became zero and it continued its uniform motion (motion along a straight line with constant velocity).

My confusion regarding the matter is that if the net force acting on a body (here the rain drop) is zero then it should remain suspended in air rather than falling towards the earth.

The friction force only exists when there is relative movement between a drop and the air.
If the drop is not moving relative to the air the only force on it is the gravitational attraction of the Earth which will accelerate the drop.
The frictional force increases as the relative speed between the drop and the air increases which means that the acceleration of the drop decreases but it is still speeding up.
Eventually the speed of the drop relative to the air is such that the frictional force is equal and opposite to the gravitational attraction of the Earth and so the net force on the drop is zero and it moves with constant velocity.

The force of gravity is unchanging (mostly) as a water drop falls, if the object was in a vacuum it will continue to accelerate as it falls, moving faster and faster until it hits the ground.

However the object is not in a vacuum, as it starts to fall it feels a force from the air rushing past it. The force of gravity is not increasing or changing but the forces of the air on the droplet is increasing as the speed increases.

At some point the drag force will catch up to the force of gravity as only the drag force changes relative to velocity. Because the forces are equal and opposite the two forces will cancel out each other. As we know an object in motion stays in motion until a force is applied to it. Because the net force is zero the speed is unchanging at terminal velocity.

If the velocity happened to be magically pushed a tad faster as it was falling the drag force (up) would then be a tad higher then the forces of gravity (down) and it would start to slow, keeping perfect balance as no other forces exist to alter the speed.

My confusion regarding the matter is that if the net force acting on a body (here the rain drop)is zero then it should remain suspended in air rather than falling towards the earth.

This may be what your intuition based on everyday experiences suggests, but that's not how things actually work. Remember Newton's first law: things that already move want to keep moving the same way - and they don't need a net force to do it. As the droplet is already falling, it's not enough for the net force on it to become zero. Instead, the net force would have to reverse direction and decelerate the droplet until it stops. If after that the net force becomes zero, then the droplet will remain suspended.

E.g. Suppose you were an astronaut in a zero-gravity environment, say in a spaceship in outer space. You are free-floating next to a wall, and you push off of it with your arms. As soon as your arms leave the wall's surface, the net force on you is zero - but you are not going to stop moving. You are going to float away, and hit the wall on the other side. Unless you have a personal jet pack, or something to throw, to generate a reaction force on you, there's nothing you can do to slow down, speed up, or change direction.

For intuition, think of curling (except the rain falls down, curling stones move horizontally). Once the stone is released, there are no horizontal forces on the stone (except a slight friction) yet it moves at a roughly constant speed (the slight friction slows it down over time). The player first accelerates the stone, just like gravity first accelerates the raindrops. Then, if the net force is zero, the velocity doesn't change. Whether this is due to a near-lack of forces (a released curling stone), or forces adding up to zero (raindrops), is irrelevant. A net force of zero preserves the prior state: either standing still or a constant speed. 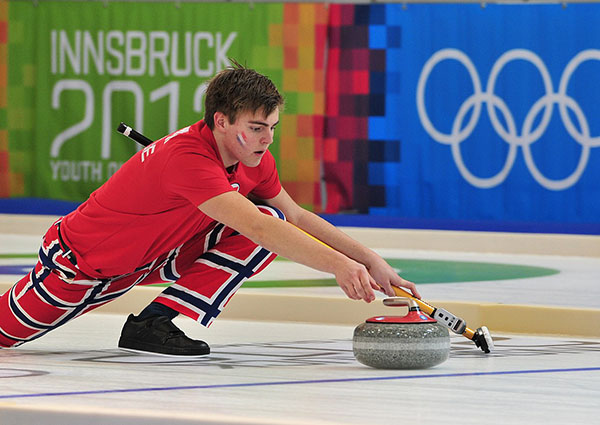 The whole journey of the raindrop can be explained as follows:

Firstly, the raindrop departs from the cloud towards the Earth with zero initial velocity. There exist two forces, buoyancy force and gravitational force conflicting with each other. The gravitational force of Earth accelerates the raindrop downward, and the buoyancy force is very small (as the density of water is much greater than air). So the speed of drop increases.

When the speed of raindrop increases so high that the fluid friction is equal to the gravitational force-buoyancy force, the net force on the raindrop finally becomes zero. Now the drop does not accelerate anymore, hence the speed of the drop is saturated.

There is a really nice answer by @Farcher, I am submitting my answer because I believe in certain cases a picture is more then words, and to add some interesting facts. 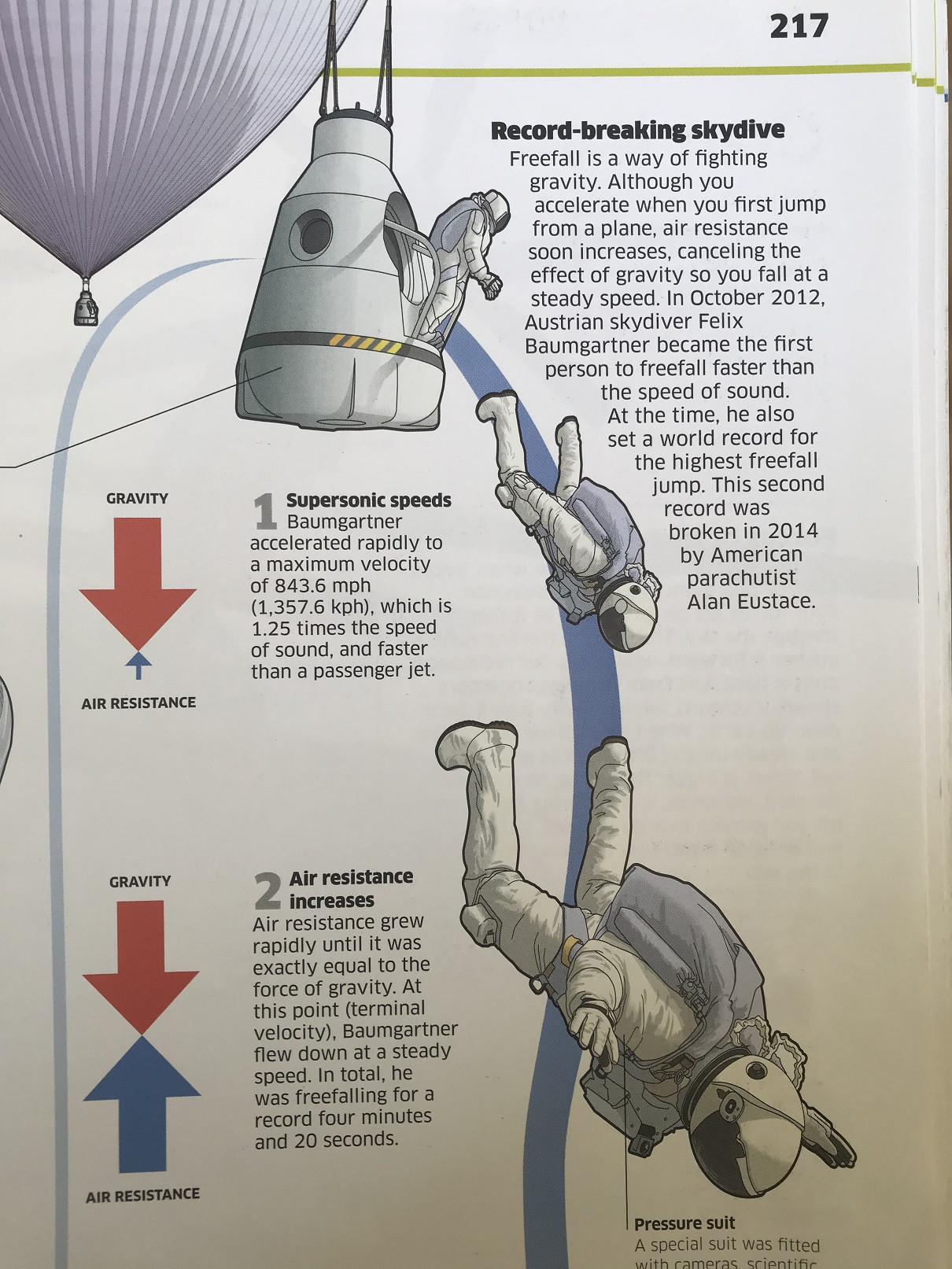 The net force doesn't become zero at the start ,it takes some time.If you consider theoretically the drag is like an exponential decay and it dies out at infinity .but if we consider practically ,the acceleration of say $0.00000002\ \mathrm{m/s^2}$ can be taken as zero.

The equation for Drag Force is given by

$\rho$ is the density of the medium through which rain drop is moving.

$A$- Surface Area of Raindrop

$v$- velocity with which it's falling .

As the body starts from rest ,it's velocity increases due to $F_g=mg$ (Gravitational Force)

As the velocity increases, Drag force increases as a square term. So at one point, the net force acting is zero, it won't accelerate, it's falling, it's velocity doesn't change .

Consider the moment when the net force becomes zero, at that moment, it is falling, if it was to stay put at that moment, then a huge force must act in the direction opposite to which it is falling ,but there is no such force, drag doesn't achieves this, because it has an important job of tackling the gravity. So there is no new force (ie) only two forces are acting Drag and Gravity.

Consider a space where there is no atmosphere and no gravity due to any planet, if we throw a ball does it stop or does it move continuously?

We can certainly say that if it were to stop, it is due to some kind of force, we aren't giving any force, so it must move.

The answer to the question lies in Newton's first law of motion:

An object at rest remains at rest, and an object in motion remains in motion at constant speed and in a straight line unless acted on by an unbalanced force.

There is a lot going on in the cloud as the raindrop forms. Firstly you have warm moist air rising, as this column of air rises it expands (pressure reduces as altitude gained) and cools eventually the moisture in the air will precipitate onto any aerosols in the rising air and form a cloud. The water droplets will coalesce and accumulate until the weight of the water droplet exceeds the updraft that is keeping it aloft - NB a kilometre wide fluffy cloud weighs in at around 6 tonnes!!

Then the fun begins with the other answers!!

Not the answer you're looking for? Browse other questions tagged newtonian-mechanics newtonian-gravity kinematics equilibrium or ask your own question.

1
Rain drop equations
1
Can drag be neglected, although the object is in motion?