Is pulling a string instantaneous at both ends? Why is it or isn't it? [duplicate]

Ask Question
Asked 9 months ago
Modified 9 months ago
Viewed 91 times
2
$\begingroup$
This question already has answers here:
Is it possible for information to be transmitted faster than light by using a rigid pole? (16 answers)
Closed 9 months ago.

This is a question that has bothered me for quite some time but I don't have a clue where to start in researching it.

Let's say we have a string which is arbitrarily long, light enough to not take much effort to pull but rigid enough that it would not break or stretch. If I now stand at one end of the string and pull on it, does the other end move instantaneously? If so, could we use such a method to send a message faster than light? I'm not referring to the speed of the rope itself, but to the time between pulling one end and the other end moving accordingly.

My knowledge of FTL messaging/travel (basically gen-ed physics and the movie Interstellar) tells me the answer is no, and there's a whole lot more going on at the atomic level, but I don't know exactly what forces are at play.

No. When you pull really fast on one end of the string, that pull gets transmitted along its length to the other end at the speed of sound waves in the string. This may be several thousand feet per second, but is nowhere near the speed of light.

First of all, you can't even imagine the force required to pull a string of length equal to or more than $3×10^8\ \text{m}$. Now, imagine you have the force to pull it, but it is nearly impossible to make a string of that rigidity. It can't withstand that enormous force.
Now, imagine you have both source of force and an extremely rigid string. Now you are pulling or pushing the string, but the fact is the force doesn't show up at the end instantaneously. Force travels through the rope as a form of longitudinal wave like this, 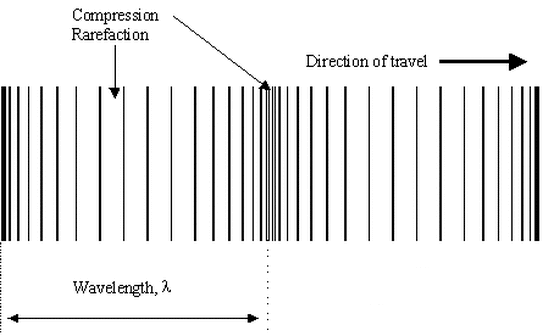 Because when you apply force on one end, it propagates through the collision of atoms, the atom at the back pushes the front one, and thus force propagates.
Note: When you take a small string and pull it, it seems like the force reaches the other end instantaneously, this happens because it is small and thus force reach the other end very fast, but for long rope, particularly this big ($3×10^8 \ \text{m}$), it is not instantaneous.

Not the answer you're looking for? Browse other questions tagged string faster-than-light or ask your own question.

115
Is it possible for information to be transmitted faster than light by using a rigid pole?

25
Why I think tension should be twice the force in a tug of war
6
What happens if I slowly lower a dangling object into a black hole?
4
Worked Example - Classical Mechanics by David Morin
1
Why is a relativistic observer required to show that FTL communication breaks causality?
1
How can I accelerate the linear speed of a spinning rock on a string when the rope can exert no net torque on the rock?