Where is the flaw in this brownian ratchet design?

As I understand, Brownian ratchets do not work because the paddle, which is supposed to keep the gear spinning in a single direction, also oscillates with thermal noise. A the paddle can dissipate the movement in one direction into thermal noise, but then thermal noise is also going to be spontaneously converted into movement in the opposite-direction, as stated in the fluctuation-dissipation theorem.

However I still do not understand why the following Brownian motor does not work, other than the fact that it would convert thermal noise into rotational energy if it worked, violating the second law of thermodynamics. 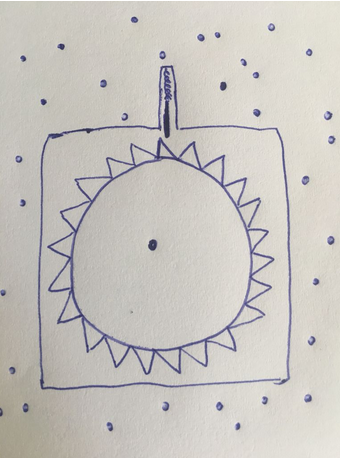 The machine is quite simple. It is a gear with asymmetric, sigsaw tooth in vacuum. Other than the shaft (not shown), the gear only touches a needle. The needle is connected to a hook and allowed to move up and down, only hitting the gear at right angles. Because of the asymmetric tooth of the gear, whenever it hits it is more likely to hit the "right side" of a teeth and to cause the gear to gain counter-clockwise angular momentum.

I understand the needle will also vibrate in the horizontal direction and that this vibration, while with higher frequency, has the same energy as the vertical movement, but this does not seem to transfer clockwise angular momentum to the gear on average.

Can someone help me understand what am I getting wrong? I have had this question for several years already and until today have not had enough courage to ask for an explanation.

In reality, both effects are relevant (the needle driving the gear and the gear driving the needle), resulting in no consistent rotation in one direction or the other.

Not the answer you're looking for? Browse other questions tagged thermodynamics entropy brownian-motion or ask your own question.

4
What does this observation of instantaneous velocity in Brownian particles mean?
8
Why doesn't a Brownian ratchet provide free energy?
5
Brownian Ratchet Plausibility
96
Where is the flaw in this machine that decreases the entropy of a closed system?
3
Why is it so hard to explain that the Brownian Ratchet doesn't work?
2
Brownian Ratchet with mechanism in vacuum
0
What's the difference between Brownian motion and diffusion?
1
Where is the error in this change of entropy derivation?
6
Simplest possible thought experiment that illustrates the difference between the past and the future?