A wire that is electrically neutral but carries current?

The wire described in the title is proposed in Griffiths's book on electrodynamics:

... To begin with, I'd like to show you why there had to be such a thing as magnetism, given electrostatics and relativity, and how, in particular, you can calculate the magnetic force between a current-carrying wire and a moving charge without ever invoking the laws of magnetism. Suppose you had a string of positive charges moving along to the right at speed $v$. I'll assume the charges are close enough together so that we may treat them as a continuous line charge $\lambda$. Superimposed on this positive string is a negative one, $-\lambda$ proceeding to the left at the same speed $v$. We have, then, a net current to the right, of magnitude $$I=2\lambda v.\tag{12.76}$$ Meanwhile, a distance $s$ away there is a point charge $q$ traveling to the right at speed $u<v$ (Fig. $12.34$a). Because the two line charges cancel, there is no electrical force on $q$ in this system ($S$). 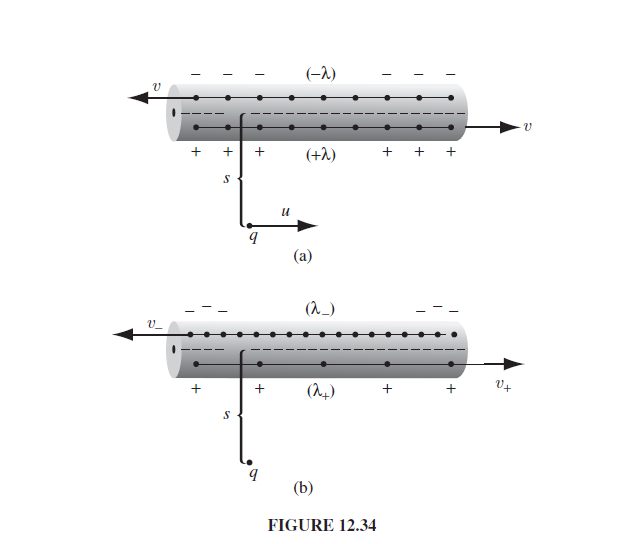 Though the section here is talking about the relationship between electrodynamics and relativity, I don't think we need any relativistic result to explain the effect. However, I do have a hard time understanding why this wire could exist, with my middle school physics. The fact that a net current can be formed in an electrically neutral wire is just insane to me! After all, an electric current is defined as a flow of charges. How could this happen? Thank you.

Your confusion is due to the fact that you believe the moving line charges should cancel each other out when we examine currents.

This is not the case. Imagine just a continuous line charge, $\lambda$, moving to the right with some velocity $v$. We know that not only is there an electric field, but that there is also some current $I = \lambda v$ pointing to the right.

This is what is meant when current is defined as $I = \frac{dQ}{dt}$ and is the key to understanding how the scenario you described behaves.

Consider the left end in your scenario. The positive line charge, $\lambda$, is pulling positive charges out towards the right, while the negative line charge, $-\lambda$, is wrestling negative charges into the left end. Ultimately, the decrease in charge will happen twice as fast as any of their single contributions, which is why the current in $(12.76)$ is doubled. A likewise consideration will reveal a similar playthrough for the right end of the line charges.

If I recall correctly I read Griffiths' Intro. to Electrodynamics in my 2nd year at university. It's good to challenge yourself, but you might need some more entry-level textbooks - and several more years of math - to get much out of it.

Why is there no charge in wire then? Answer: If charges get accumulated they will create Electric field which will force electrons to move and remove that excess charge. Charges don't accumulate = No electric field

When you have huge air vollume flowing in tube , there is no region in tube with more density since it can increase pressure and will change the flow as to remove that pressure

In Bohr model, an atom with the same number of electrons and protons is considered neutral, although there are regions with different charges. If we assume one electron detaches from the atom, but at the same time that gap is filled by another electron from the outside, we would have some charges flowing in the system while the atom staying neutral.

Actually there is a very short amount of time that single atom is not neutral, but if you consider a section of wire with $10^{20}$ish number of atoms, that effect would be neutralized.