Cosmic inflation and how does it stop?

What conditions make out the probability for the Cosmic Inflation once began to stop. For instance quantum physics says that once the inflation started there was a probability say 80% for it to stop and that dark energy to decay into ordinary matter and radiation. But what governs the inflation to stop in the first place?

This is an open and active area of research, so the bottom line is that no one knows.

In fact, it's an open question whether inflation itself occurred or not. However, there is reasonable evidence in favor of the inflation hypothesis -- the fact that it solves the flatness and horizon problems, and the fact that it can naturally generate the initial density fluctuations leading the CMB. On the other hand, there is no experimental evidence to directly tell us what happened between inflation and the radiation dominated era. And, there are many theoretical ideas that are possible, but none of them are particularly favored.

The vanilla story, for single field slow-roll inflation [1], is that inflation occurs as a scalar field slowly rolls down a relatively flat potential. Inflation ends when the potential becomes steep enough that slow roll is no longer possible. More concretely, there are so-called "slow roll" parameters \begin{eqnarray} \epsilon &=& \frac{m_{\rm pl}^2}{16\pi} \left(\frac{V'(\phi)}{V(\phi)}\right)^2 \\ \eta &=& \frac{m_{\rm pl}^2}{8\pi} \frac{V''(\phi)}{V(\phi)} \end{eqnarray} where $m_{\rm pl}$ is the Planck mass and $V$, $V'$, and $V''$ refer to the scalar field potential, first derivative with respect to the field, and second derivative with respect to the field, when the field takes the value $\phi$. Inflation can occur when these parameters are much smaller than one, which amounts to saying the potential is flat (its derivatives are small). When the inflaton reaches a steep part of the potential, inflation ends.

When the inflaton accelerates, it "somehow" decays into Standard Model particles. This could happen via several different processes. The basic version of this process is "reheating," where inflaton particles present because the inflaton field is in an excited state, decay into Standard Model particles. This is described in more detail in Section 3.1 of [2], and references therein. This scenario is "basic" in the sense that the physics is relatively simple to understand and calculate, given a model.

There are also more complicated scenarios ("complicated" in the sense of "harder to handle mathematically", not "complicated" in the sense of being a less likely hypothesis) wherein the coupling between the inflaton and Standard Model particles depends on the inflaton's value. As the inflaton reaches the end of inflation and oscillates around the minimum of its potential, it pumps energy into standard model fields in a non-perturbative process, akin to "parametric resonance", or changing the frequency of a harmonic oscillator with time. This goes by the name of preheating, and is discussed in Section 3.2 of [2].

For instance quantum physics says that once the inflation started there was a probability say 80% for it to stop and that dark energy to decay into ordinary matter and radiation.

In the present cosmological model where an effective quantization of gravity is assumed the probability of the primary inflation to stop is controlled by the continued expansion due to the originally assumed Big Bang: 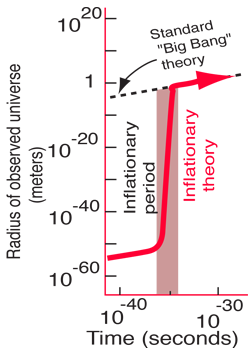 Triggered by the symmetry breaking that separates off the strong force, models suggest an extraordinary inflationary phase

In the particular quantum mechanical model the inflation stops when the continuing expansion of the Big Bang (cooling of constituents, i.e. lower momentum energy and desnity) brings the energies per unit volume too low for the inflaton interactions so after the time in the graph the probability is zero.

This is still an open research question, particularly because gravity has not been definitively quantized.

Not the answer you're looking for? Browse other questions tagged quantum-mechanics spacetime big-bang cosmological-inflation or ask your own question.

13
On Flatness problem, Inflation etc
19
Inflation and the Meaning of Time
2
Attractive higgs force and inflation
4
How does inflation relate to spontaneous matter creation?
1
Why doesn't Dark Matter participate in BBN reactions?
4
When did matter/energy come into existence? Before or after the CMB?
4
The quantum nature of primordial density perturbations and how do they affect densities of radiation/matter dominated epochs?
2
Is inflation a possible explanation for what started the expansion?
0
How inflation creates a universe from nothing?