Deflection of Alpha & Beta Radiation in an Electric & Magnetic Field

To explain how alpha and beta particles are deflected, the following two figures have been provided in my textbook but without any explanation for the intensity of the deflections shown: 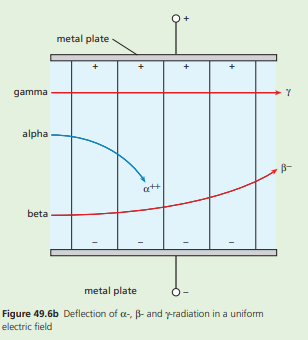 I have two theories regarding why the alpha particle was deflected more than the beta particle:

One of these ideas may be right, both or none of them -- I have no idea and Googling these does not give me a proper description. The second figure in the book shows the particles' deflection in a magnetic field, again with no explanation, leaving me to fumble around with my own ideas... 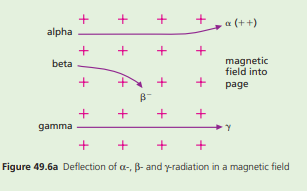 Now, I guess the reason why the alpha particle didn't deflect quite as much here is due to its weight, but my reasoning breaks down for the beta particle — shouldn't it not have deflected as drastically due to its immense velocity?

Can anyone properly explain these ideas? I'm positive there is some deeper, more complex relationship I am missing out on.

In the second case, the centripetal force needed is much higher for the particle with larger mass, $$q\vec v\times\vec B=\frac{mv^2}{r}$$

so $r$ is much larger due to the large $m$, and double charge does not affect it significantly.

9
Mechanism by which electric and magnetic fields interrelate
6
Why do $\beta$ particles not get attracted to the nucleus?
2
What is the distribution of energy between the alpha, beta and gamma particles emitted in nuclear fallout per one RAD?
0
Dependence of atomic mass number in the Bragg Kleeman rule
1
In the Rutherford scattering experiment, does increasing the mass (with constant charge) of the nucleus affect the deflection?
0
If the probability that an alpha will deflect is $1/10000$, for $n$ layers, is the probability is only $1/10000n$?
2
Is the Timing of Alpha Particle Radiation Perfectly Random?
6
Why some alpha particle tracks shows curvature *without* applied magnetic field?
0
Deflection of radiation particles in field
10
Why were sparks created in Rutherford's alpha particle scattering experiment?