Can a bullet travel all the way around a centrifuge?

I'm not planning to shoot any astronauts, but researching a problem for a story.

Picture a rotating centrifuge in space, spun to generate artificial gravity, like so: https://media.wired.com/photos/5b33cf8f8d9ebd40cd3edeee/master/w_1600%2Cc_limit/rotatingspacecraft1.png

What I want to happen is to have this spinning at the right rate so that a bullet fired from a typical handgun will travel in a path maintaining constant height above the floor (where a person would be standing),completing at least one orbit before atmospheric affects cause it to fall. For this to happen, the bullet must be travelling in the direction opposite to the spin direction--the coriolis effect will cause it to drift away from the "floor", so that it drifts upwards.

My initial assumption is that this will work if the bullet's velocity matches the rim velocity of the centrifuge. A quick calculation (http://www.artificial-gravity.com/sw/SpinCalc/SpinCalc.htm) tells me that this can work just fine--with a bullet velocity of ~200 m/s for a typical pistol, this would work in a centrifuge of a radius if 4 km or so. Big, of course, but not outside the realms of possibility or comfort, and it would give it a reasonable speed of half a rotation per minute.

But what I'm not sure about is the atmospheric affects. How much will drag on a bullet move it off its initial course? Does this need to happen in a vacuum to work? Are there any errors in my assumption that make this impossible? Any help would be appreciated. 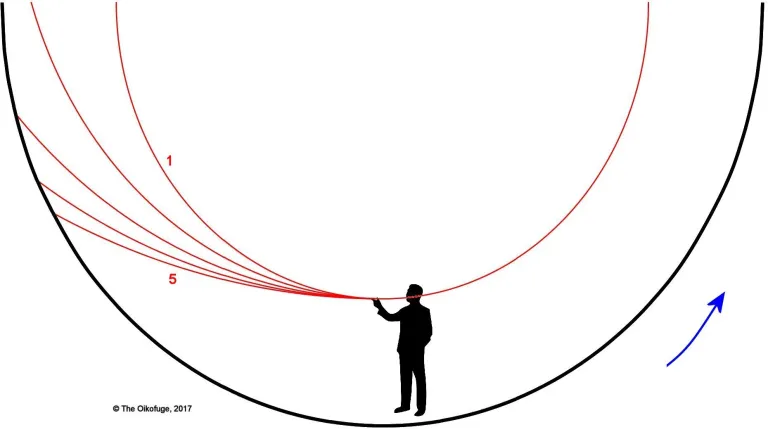 This image illustrates what I'm talking about. (Source: https://oikofuge.com/coriolis-effect-rotating-space-habitat/) The projectile to an outside observer would appear to be stationary. Which is bad news for anyone firing bullets in this thing.

This and other sources seem to confirm my thinking. Am I reading them right?

I also assumed that the air density was constant throughout the station and was rotating with the station. The bullets were "fired" from a height of 1.5 m "above" the inner surface of the station. The trajectory of the bullets was assumed to be perpendicular to the axis of the space station's rotation.

Based on this, here are my results. The blue line is the trajectory; the black curve is the outer wall of the station. Code is available at the bottom of this answer.

The bullet lands about 270 m away after a time of flight of about 2 seconds. Note that this time of flight is substantially longer than a bullet dropped from a similar height on Earth (it would be about 0.55 s), since the Coriolis force is pushing "up" on the bullet. But unfortunately, since the bullet is constantly losing speed to the drag force, there is insufficient Coriolis force to maintain the circular trajectory, and it eventually hits the inner surface of the cylinder.

As pointed out in the comments, a space station could use a low-pressure pure oxygen atmosphere instead of an Earth-like atmosphere. Since the density of the air would be lower, the bullet would go further. Wikipedia says that the lowest pure-oxygen spacesuits use 20.7 kPa of oxygen, which according to the ideal gas law reduces $\rho$ to about $0.272 \text{ kg/m}^3$. Running the code with this gas density leads to a range of about 615 meters rather than 270 — farther, but still nowhere near all the way around.

It is possible for you to hit yourself with a handgun bullet on a large space station if you fire it nearly (but not quite) vertically, with a small component of the initial velocity against the rotation direction. With the given initial height and muzzle velocity I assumed, an elevation angle of about 79.5° seems to do the trick. The bullet returns after about 19.4 seconds with a speed of about 55 m/s. I don't know whether this would be fast enough to be lethal, but it would definitely leave a mark. 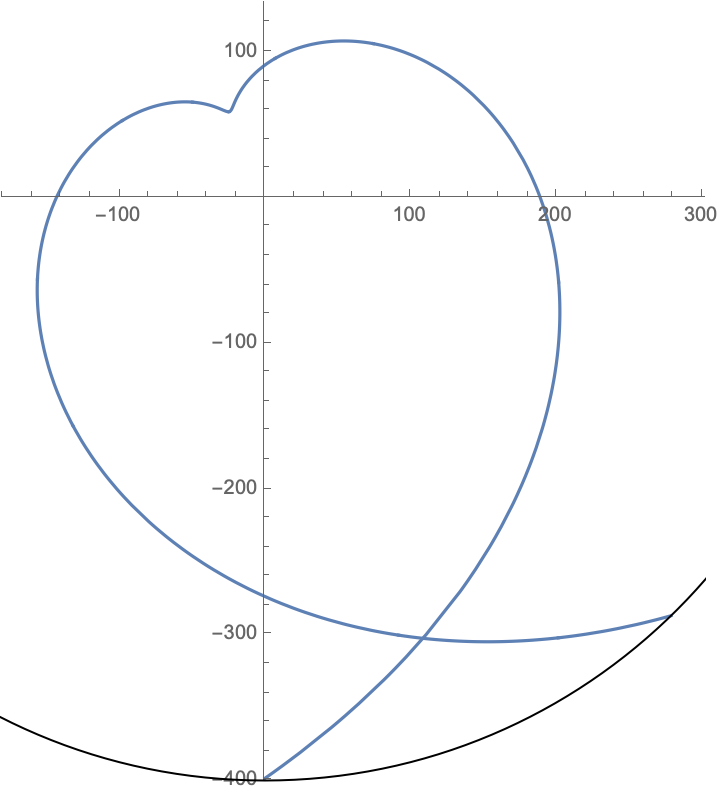 I think you're right that atmospheric effects are an issue. This is easiest to see if you picture the situation in a non-rotating reference frame.

In that case, just after the bullet is fired it is stationary in space. However, it is inside a 4km radius rotating habitat, and the rim of the habitat is moving relative to it at exactly the speed of a speeding bullet. That means the air is moving past it at that speed as well.

So the situation is analogous to a single bullet in a wind tunnel, exposed to 200 m/s wind speeds. The bullet is stationary initially but it's not going to stay that way for long. The bullet has aerodynamics on its side (it's pointing into the wind and designed to travel far), but given the size and speed of the habitat it will take a couple of minutes to complete a full revolution, and that's really more than enough time for the wind to start the bullet moving, which will cause it to crash into the side due to its inertia. (For someone inside the habitat, in the rotating reference frame, that corresponds to the bullet slowing down and falling.)

On the other hand, if the shooter aims high it might be possible for this effect to be canceled out. The bullet wouldn't be stationary but would still end up back at its starting position. I don't know anything about guns, but in the rotating reference frame it has to travel about 25 km around the whole rim, so you would need one that's capable of that kind of range.

The bullet will move straight from the point of view of an inertial observer, there is no force on the air that provides it with a centripetal force, such as the friction on the foot for humans and furniture. Thus in the frame of the rotating centrifuge the bullet will "fall" towards the floor, if you point the gun horizontally.

[...]for a typical pistol, this would work in a centrifuge of a radius of 4 km or so.

Summerizing the setup:
A 4 kilometer diameter rotating space station will have the rim going at a velocity of 200m/s


Let me first go over the case without atmospheric drag, subsequently I will bring in atmosphere.

The initial state is that the handgun is co-rotating with the hull of the space station, moving at 200 m/s.

As seen from a point fixed to the space station the bullet will start to drop.

So what you need to obtain is an estimate for how much velocity the bullet will gain (velocity relative to the center of mass of the space station) That will give you an estimate of how much time until the bullet has dropped so much that it is of no use for the plot of the story.

There was an episode of Mythbusters where they moved to a remote location to set up a rig that would fire a bullet from a handgun, attempting to fire straight up so accurately that the bullet would hit the ground again very nearby. Those bullets had very long flight times, so it may well be that in the space station story after a full revolution of the station the bullet hasn't dropped all that much.

So I think the follow-up question for this one is: "In the absence of gravity causing drop, how much is a bullet from a handgun slowed down after half a minute?"

Coriolis does not help - it would affect a bullet that's flying parallel to the rotation axis but not one that's perpendicular to the axis. A shot perpendicular to the rotation axis will behave just like a shot on the equator of Earth: fly straight but losing speed due to friction, and height due to gravity (centrifugal force in this case). The shot will, however, hit the ground much more quickly than on Earth because of the curved cylinder ground.

The answer is simple, and it is identical to the question:
Can you shoot something $2\pi\cdot 4km = 25km$ away from you with the gun in question?
The answer is obviously "no". Otherwise it wouldn't be possible to safely build out-door shooting ranges, or hunt birds in the vicinity of an airport (25km safety radius!). The truth is, that the ranges of firearms are limited by the atmospheric drag of the bullets they fire, and most rifles do not allow you to hit a target at even 1km distance.

I'm also sorry to inform you, that this means that this story idea won't work without resorting to handwavium: If you scaled down your centrifuge, the bullet would need to become slower due to the lower speed of the centrifuge rim, and by the time you've shrunk the centrifuge to 1km circumference, your bullet won't be deadly in any way (and still not be able to make the voyage).

Trying to build this up one step at a time, and intuitively.

Forget the atmosphere. Assume a perfectly aligned shot, "retrograde" if you will, which exactly cancels out the spinning velocity of the shooter (and gun). Assume an instant bullet launch, i.e. the spin of the barrel (from the centrifuge) is assumed zero, so the bullet travels in an exactly straight path.
I am also ignoring the fact that the "wind" (from the spinning atmosphere) doesn't move in a straight line, because I assume that your centrifuge will be rather large and I can therefore approximate a near-straight trajectory along a 1 cm length (which is what I assume your bullet length will be).

MythBusters have provided us with an excellent example:

This is exactly what it will look like to an observer outside of the centrifuge, except the projectile won't start falling downwards due to gravity. It will just hover there. That is, if there is no atmosphere.

However, with an atmosphere, as it hangs there, the atmosphere passes by. This is effectively a wind tunnel:

Which will start accelerating the bullet leftwards over time. This indeed messes with the positioning of the bullet.

You could try to account for it. Let's say we shoot the bullet at slightly less than the spinning velocity of the shooter (and gun). Therefore, the bullet drifts a bit rightwards because it did not cancel out the spin entirely.
However, over time the wind will push the bullet leftwards, which is capable of "undoing" the rightward drift due to undershooting our shot.

This all assumes perfect knowledge and execution, but it is not technically impossible.

However, it seems considerably easier to just shoot upwards instead of trying to make the bullet travel along the surface, for many reasons.

As a last minute alternative idea, you could also shoot your bullet faster than the spinning surface speed and give your bullet little wings so that it generates lift, thus traveling along the curve of the centrifuge.

I guess this makes it more of a mini-missile than a bullet, but it should be viable given the right kind of engineering.

Not the answer you're looking for? Browse other questions tagged projectile centripetal-force centrifugal-force coriolis-effect or ask your own question.

3
How long will it take for a bullet to reach a Geostationary orbit?
0
Rigid bar on the floor of a rotating space station
2
Effect of small changes in atmospheric pressure on open cylinder piston
10
Coriolis force and conservation of angular momentum
0
Spinning ice skater and Coriolis force
2
Pouring coffee in a rotating space station
1
Free fall in a centrifugal space ship?
1
Real force analogue names for the coriolis and azimuthal fictitious forces