Conservation of angular momentum in an inelastic collision 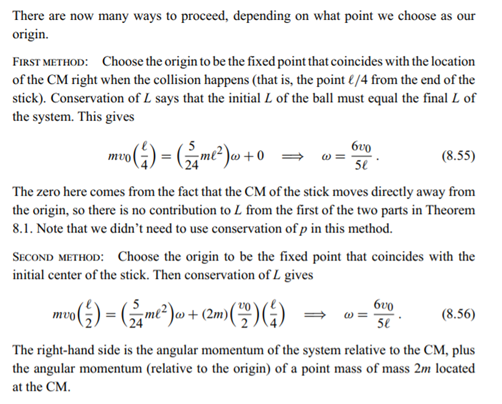 I have a question about the second method used to solve the problem above.

You can calculate moments of inertia about any axis you want. But if the system isn't actually rotating around that axis, then you can't use it to (directly) calculate the rotation speed.

Instead of all the parts moving with speed proportional to $r$ as the distance from your axis, the parts are moving with various speeds as it spins around the center of mass.

(8.56) above always uses the center of mass of the post-collision system as the axis to calculate the rotation speed. The relocated origin is only used for the angular momentum of the linear motion of the center of mass, not as a changed axis for the moment of inertia of the spinning stick.

The CM of the system (the mass and the stick together) moves in a straight line and every point of the system rotates about the CM.

I think the mistake arises from considering the mass m and the stick together as a whole system and writing the conservation of angular momentum about a point (middle of the stick) which is not the CM and this point, itself, is rotating around the CM. You can do that, but have to take the angular momentum of the CM about the middle point into calculation, as it is done in the second method.

I considered the stick as a system (without the mass m) and wrote angular momentum conservation around its CM (the middle point of the stick) and got same answer as 8.56