To derive this formula, one analyzes a collision while assuming the principle of relativity and the conservation of momentum principle are correct: https://www.feynmanlectures.caltech.edu/I_16.html

I'm fine with all that. What I want to know is the mechanism which causes this. At speed $0.0001c$, force applied is approximately proportional to acceleration. At speed $0.89c$, the same force applied changes the speed of the object very little. Acceleration due to a force is a precise function of the mass and the pre-existing velocity. What is causing this, is there something unseen which 'acts' upon the moving object to render this phenomenon? Does it have something to do with the Higgs field? Is it because of time dilation? Thanks. 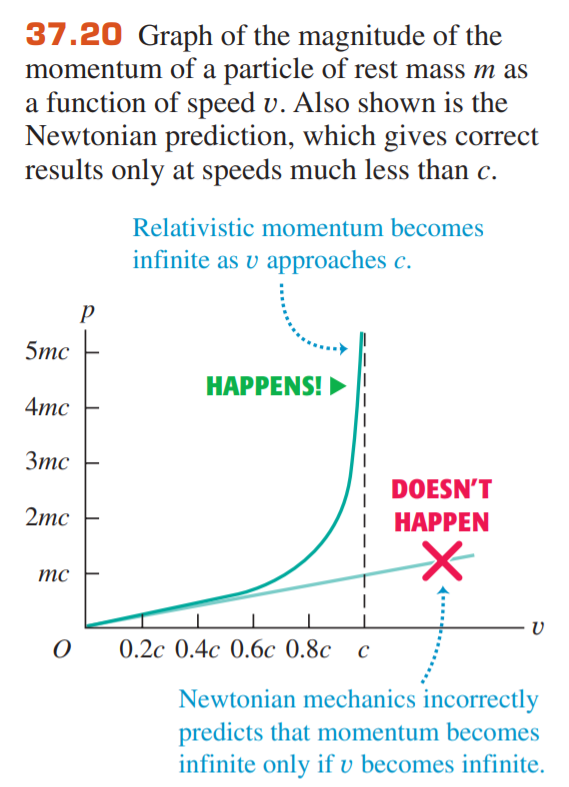 The mechanism is the nature of time and space. Time dilation is certainly an aspect of this.

The usual introductory thought experiment shows that if there is to be a conserved quantity behaving like momentum then its transverse component is invariant between inertial reference frames. But we know that transverse velocity, $u_y=\frac {\Delta y}{\Delta t}$, is not invariant because although $\Delta y$ is invariant, $\Delta t$ is not. But if we replace $\Delta t$ by the invariant interval $\Delta \tau$, then we have an invariant kinematic quantity with the dimensions of velocity. It is easy to show that $$m\frac{\Delta y}{\Delta \tau}=m\gamma(u)\frac{\Delta y}{\Delta t}=m\gamma(u)u_y.$$ Similar expressions must apply for the other momentum components.

The justification of this expression for momentum is not really this thought-experiment, beautiful though it is, but the coherence of the whole fabric of relativistic dynamics. For example, we find that a body's three relativistic momentum components and its energy are the components of a 4-vector with an invariant modulus (mass) exactly analogous to the 4-vector representing the space-time interval between two events.

We also find that, using this definition of momentum, we can express the Lorentz force law in a way that holds in every inertial frame: $$q(\vec E +\vec v \times \vec B)=\frac d{dt}m\gamma(u) \vec u.$$

This is relevant to your statement: "At speed $0.0001c$, force applied is approximately proportional to acceleration. At speed $0.89c$, the same force applied changes the speed of the object very little." I suggest that you look at it a rather different way: it is not the rate of change of $u$ that a force (in the same direction as $\vec u$) is proportional to, but the rate of change of $\gamma(u) u$.

I think what you are looking for is an understanding of 4-force, that is the vector which describes force in relativity. Without getting into the details (which are easily accessible by a google search), the key aspect is that the relativistic four force for a given classical force depends on the velocity of the object that it acts upon. The four force is in some sense a consequence of time dilation, or maybe more exactly that objects experience their own proper time, which is different from that of other objects in different frames.

As for a specific mechanism for objects when they are accelerated at relativistic speeds, there cannot be one, for consider Einstein’s postulate that (paraphrased) all inertial observers agree on what happens in the universe. Now consider a observer who sees the object stationary, and another who sees it at a relativistic speed, and consider the object to be accelerating. If the relativistic observer sees some special mechanism that affects its acceleration, then the stationary observer must see this also, but then that would make the idea of the relativistic mechanism redundant. Perhaps I have misunderstood your question in this part though?

Using your arm to accelerate a block of iron 1: to low speed 2: to high speed:

High speed: afterwards iron atoms and fat molecules have gained momentum (there also occurs a conversion of fat molecules to something else)

Extreme speed case: before the acceleration you are a 300kg guy, then you use your legs to to accelerate yourself and an iron block to extreme speed, afterwards your mass is zero, another observer sees only iron that has been accelerated to high speed.

Let's say the mass of iron block is 1kg. And in the extreme case the final speed of the block is v. The momentum of the block will be: $301 kg * v.$

Not the answer you're looking for? Browse other questions tagged special-relativity momentum or ask your own question.

1
Friction on an object moving with momentum over a surface
4
Definition of force, kinetic energy and momentum
0
Clarification on infinite mass/momentum argument
0
Fundamental principle of Dynamics - Newton
2
A conceptual propulsion device based on instantaneous energy transfer of relativistic mass
1
How is force related to launching objects with a lever?
1
How can the friction force equals to the net force in this momentum question?