What does this spacetime diagram mean?

I'm reading a book called "Reality is not what it seems: the journey to quantum gravity" by Carlo Rovelli and I'm struggling to understand this diagram that is part of the chapter about special relativity. 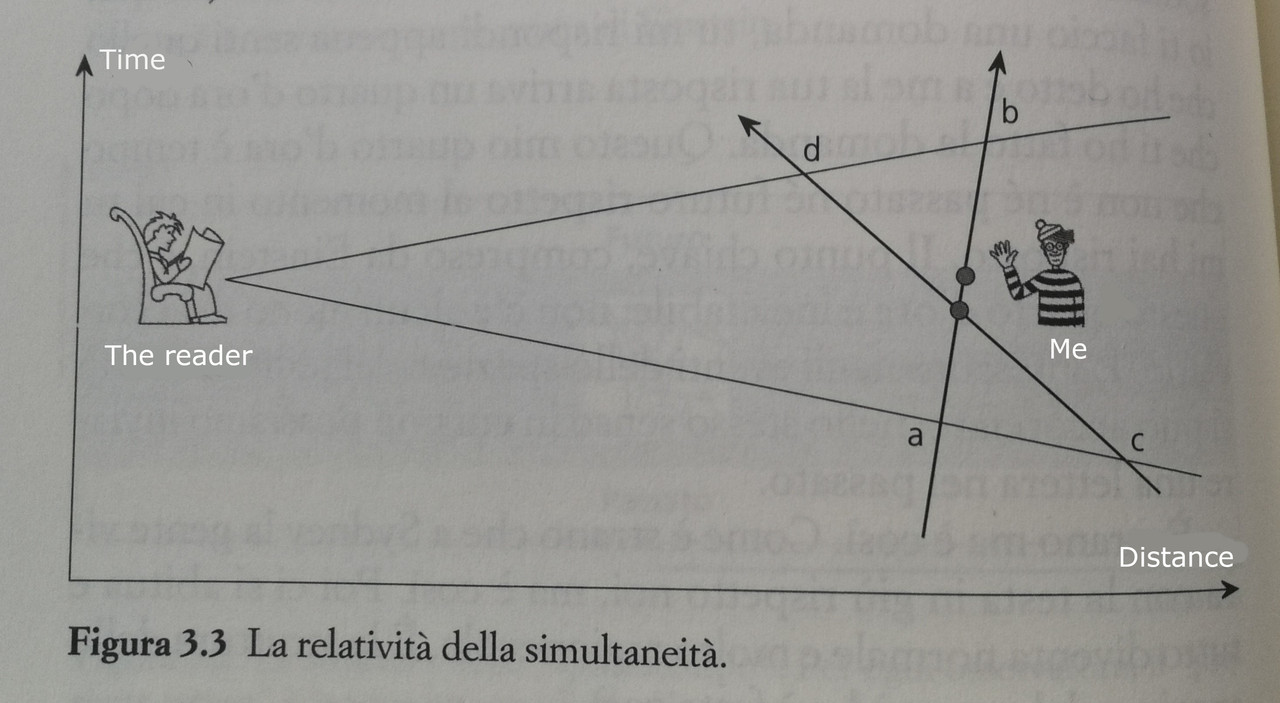 Before this image Rovelli writes:

"It's not possible to have a satisfying conversation from Earth to Mars. If I'm on Mars and you are here, I ask you a question, you answer as soon as you hear what I told you and I receive your answer 15 minutes after I asked you the question. This quarter of an hour of mine is time that is neither past nor future as compared to the moment when you answered. This implies that you can't say that an event on Mars is happening "now" because "now" does not exist".

I understand this concept, but then the author adds a footnote:

(I'm reading this book in Italian so I had to translate the paragraph, I'm sorry if it's not faultless).

First of all I don't understand what it means that "the moment in the middle of my quarter of an hour can be considered simultaneus to your answer". I tried to draw diagrams, I'm really struggling but I can't grab the concept. Talking about the diagram, why can we say that the observer perceives the two dots as simultaneous? They don't exit his past and enter his future at the same time, do they? In these diagrams souldn't we find simultaneous events on the same horizontal line?

I'm completely stuck, I would be very grateful if you could help me.

Informally, one major conclusion of special relativity is relativity of simultaneity. Two events that are seen (or can be deduced as) simultaneous by one person, will not necessarily be simultaneous to a moving observer. But let me try to illustrate what that really means. What happens is that their space and time coordinate axes reorient in a particular way.

For example, if you had a string of LED Christmas lights that can change color, and you set them to all simultaneously show the same color, and to cycle through colors over time, an observer moving in the direction of the stretched out string of lights will find the LEDs changing in a rainbow wave pattern. This is because the events (points in spacetime) that are simultaneous for the moving observer are "tilted" compared to your frame; the two ends of the string that they observe as contemporaneous exist at different times to you.

For clarification, take look at this image - this was made for a different purpose, but the principle is the same. In these diagrams, a physical object is always drifting somewhere "upwards" due to the passage of time. Suppose the string of Christmas lights is laid out along the horizontal axis and is simply flashing on and off (yellow bands and dark bands, respectively) as both you, the astronaut, and it go through time. The coordinate transformation for the rocket is depicted by the red dashed line. That's their coordinate grid. In it's own frame, the rocket itself is stationary (from it's own perspective), and just moves up the time axis. But look how the other axis is tilted as well; that's what's simultaneous for the rocket. See how it intersects the band? For the rocket, one end is lit (and in the past of the astronaut), and the other end is dark. 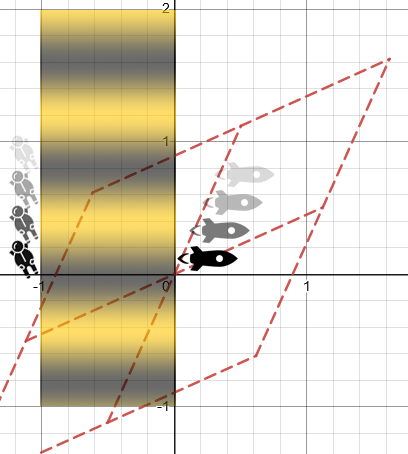 Another way to think about it is like this; suppose you print out frames of a movie and stack them in order, like you'd stack plates, to form a block (or a flip-book) that contains the entire movie. If you slice it somewhere in the middle, you'll get a particular frame. But if you slice it at an angle, you'll get a new image composed of strips of different frames. The Lorentz transformation is not exactly like that, there are some details that differ, but the simultaneity aspect is similar.

First of all I don't understand what it means that "the moment in the middle of my quarter of an hour can be considered simultaneus to your answer".

It just means that if the assumption is that it took 7.5 min to send the message one way, and then another 7.5 min to receive the response (15 min roundtrip), one could deduce that the event (point in 4D spacetime) simultaneous to the event of recipient receiving the message is when (and where) the sender was at 7.5 min mark as measured by their clock. Don't forget, we're talking about spacetime now, so when the author says "point" and depicts it in a graph, they mean a location in both space and time (it has spatial coordinates as well as a time coordinate).

But that's just relative to them. For an observer moving in a different way, the midpoint might be at a place in 4D spacetime that's not agreed by all observers as simultaneous to the reception event.

For example, for the observer in the chair, the midpoint in the second picture is in the future compared to the moment when the message arrives. 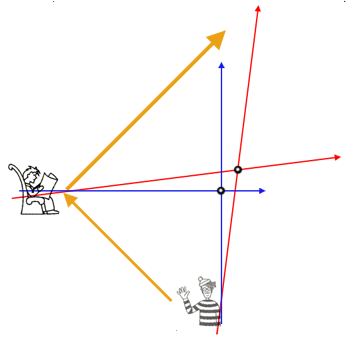 Talking about the diagram, why can we say that the observer perceives the two dots as simultaneous? [...] In these diagrams souldn't we find simultaneous events on the same horizontal line?

I think that the author was a bit imprecise with words. In "The two dots are both simultaneous to the reader, but relatively to two different motions", the author isn't saying that the reader observes the two dots as simultaneous, but that two different observers (represented by the two tilted arrows - moving through spacetime) can each consider their respective dot simultaneous to some specific event at the reader's location (so, to a third dot - "the reader is here and flips a page right at this moment"). You're right, for the reader, simultaneous points are on horizontal lines; for the two observers in motion, the simultaneity lines are tilted depending on how they move.

Not the answer you're looking for? Browse other questions tagged special-relativity spacetime reference-frames coordinate-systems observers or ask your own question.

1
Length contraction in a boxcar problem

13
Does the "Andromeda Paradox" (Rietdijk–Putnam-Penrose) imply a completely deterministic universe?
5
Relativity of simultaneity - An example
1
Deduce time dilation from a Minkowski diagram?
1
Problem with Minkowski diagram for twin paradox
3
Special relativity - loss of simultaneity - Is that real?
3
What exactly does the observer's coordinate system mean in special relativity?
0
In the twin paradox, can light signals be used between twins to figure out what their proper times were when the light signals were sent?
3
Curved simultaneity lines while at rest due to future motion?
1
Can there be simultaneity without a reference frame?