Recently, I started thinking about how to prove or, at least, provide an intuitive explanation for why Newton's third law should be true, and I found this article: https://www.lockhaven.edu/~dsimanek/cutting/3rdlaw.htm#:~:text=It%20asserts%20that%20"If%20body,FAB%20%3D%20–%20FBA.

Essentially, the proof mentioned in the article is:

Consider two bodies (A and B) coliding simultaneously with another object (C) between both. As the mass and size of C tends to zero, the resultant force on it is equal to $$F=\lim_{m \rightarrow0} ma=0$$ Therefore, the sum of the two forces exerted on C must be equal to zero, which implies these two forces are the opposite of each other. 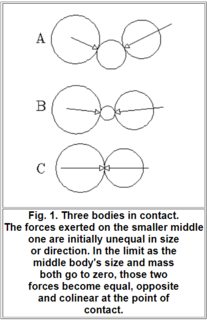 However, I'm uncertain about the validity of this proof, especially considering that the author of the article appears to defend perpetual motion.

Well, assuming the resulting force is non-zero and F=ma holds, $$ \lim_{m\to0} ma = F, $$ which would lead to an infinite acceleration. But that would not contradict the intuitive observations per se - the smaller the object, the faster it could plop away from these two massive colliding bodies. Unsurprisingly, this "proof" does not really prove much - it just assumes this limit must be zero instead, and the rest is just trying to frame it nicely.

Newton's laws are mostly empirical. One could "derive" them from the conservation of momentum/energy, but that's not how they came to be.

The third law is not valid for 2 charged particles moving around as result of their interaction. The combined electric and magnetic forces are in general different in modulus and don't have the same direction.

Of course, the momentum is conserved when taken in consideration the fields. But it is beyond that type of proofs.

You're right to be suspicious of this proof. It's wrong.

The first error is succinctly stated in the fourth paragraph:

If "bodies" are things that Newton's laws describe then there are no "bodies of mass zero". You can't push a photon.

It's perfectly valid, on the other hand to analyze Newton's second law in terms of limits, as several answers here have done, but you gotta clarify your assumptions. Which quantities are held fixed as you decrease the mass? Which quantities change? There certainly are cases where the net force acting on an object does not vanish as its mass goes to zero: like a rocket ejecting mass, or a sequence of less-and-less massive charged particles in an electric field (e.g. the tau, muon, and electron).

Perhaps the most interesting discovery here, is that the article you linked is not sincere. It's a parody of scientific quackery. The pseudonymous author is "Ken Amis", the true author's surname written backwards. I'm not sure of Simanek's purpose, but this and other parody articles listed on their website may have been used to train students to pay attention.

If you're depressed to have gotten snagged, don't be! You smelled something was off, and inquired deeper. That's a good sign. And Newton's laws are famously subtle. Nobel laureate Frank Wilczeck struggled with them for good reason.

The supposed 'proof' you quote is entirely specious. The force imposed by each of the larger balls on the smaller would tend to zero as the mass of the smaller ball tended to zero, so you would simply have the result that the overall force was zero because the two contributions to it were, and not because they remained large, equal and opposite.

You cannot 'prove' laws of physics in an absolute sense- you can only show that they are consistent with observed truths and with each other. In that spirit, you can readily prove Newton's third law by considering energy conservation. If the result of two bodies interacting was that one gained more energy than the other lost (which would happen if action and reaction were not equal and opposite) then energy would not be conserved.

the collision equations are:

from the solution of the equations you obtain

Just a general comment on this type of question. Many are saying "laws cannot be proved". While, in principle, this sounds reasonable it's not really true in practice.

We find out from the principal of least action that Newton's 2nd Law can be "proved".

We find that the "entropy law", or Clausius' theorem, is corroborated by theoretical results obtained from various microscopic analyses of matter and energy. This is in essence a "proof" of equations that were otherwise known from the study of macroscopic systems (e.g., thermodynamics).

Certainly Newton's law of gravitation is "proved" by taking a limiting case of Einstein's field equations.

On some level, yes, laws cannot be "proven". But in my opinion it depends the depth of such a law and its range of validity. Typically more fundamental, or "deeper", laws encode some of those higher level laws, and that might constitute a proof.

First of all laws cannot be proved we defined a quantity which is equal to the rate of change of momentum. But here I will give you a classic explaination for the intuitiveness. Suppose two particles are experiencing a mutual forces $\vec F_{ij}$ and $\vec F_{ji}$ as motion of the system is symmetric under translation we know that momentum will be conserved so the impulse imparted by each particle on one other in a small amount of time will be the same implying that $\vec F_{ij}dt=-\vec F_{ji}dt$ giving us our equation.

Coming to your proof $$\lim_{m \to 0}ma=F$$ you don't get much out of this equation its weird to say that this proves third law assume a water dropper two masses are pressing the water dropper so that water flows through the hole this doesn't proves the masses apply equal and opposite force till the water flows out and our assumption $m \to 0$ is imposed.

Not the answer you're looking for? Browse other questions tagged newtonian-mechanics forces momentum conservation-laws or ask your own question.