If gravity isn’t a force how does it cause motion? [duplicate]

In general relativity, gravity is the effect of curving space-time caused by mass and is described as an acceleration.

So what exactly is causing this pull towards the earth?

Is acceleration and force just interchangeable so the force is just the mass times that acceleration?

What is causing us to “slide” down this curve of space and time?

I feel like this is kind of vague and I am not sure if I got across what I really wanted to ask, but if you could explain how exactly gravity causes motion I would really appreciate it.

A force is not required for movement. A force is required for (proper) acceleration. An object in free fall does not accelerate as can easily be confirmed by an accelerometer attached to the object.

So what exactly is causing this pull towards the earth?

There is no pull downwards towards the earth. It is the surface of the earth that is accelerating upwards, again as can easily be confirmed by an accelerometer on the ground.

What is causing us to “slide” down this curve of space and time?

That is inertia. We go in a straight line at constant speed, as measured by an accelerometer unless acted on by a real force. This is called inertia.

All objects follow paths in curved spacetime, and these paths are called geodesics. An object falling in the earth's surface follows a geodesic that depends on its velocity and not its mass (light and other massless objects, where $v=c$ always, follow geodesics).

The first term on the LHS is the acceleration of the object in our coordinate system. The second term describes the effects of gravity where $\Gamma^\alpha_{\mu\nu}$ are called the Christoffel, or connection, symbols, and the other two are velocity. These symbols encode the effects of the curvature of spacetime. It shows us that the curvature of spacetime changes the acceleration of the object, based on its velocity through spacetime.

If there is no spacetime curvature, then all of the Christoffel symbols vanish $$\Gamma^\alpha_{\mu\nu}=0\leftrightarrow \frac{d^2x^{\alpha}}{dt^2}=0$$ and there is no acceleration (Christoffel symbols may not completely vanish in non-Euclidean coordinates, but this changes none of the physics). The important point is that the acceleration of the object is completely determined by the curvature of spacetime$^1$.

You may have heard this many times in general relativity, and that is matter curves spacetime, and the effect of the curvature of spacetime is to cause gravitational force. But it isn't a force that acts on the object, but instead it’s that the object follows a geodesic in spacetime.

We can summarize the evolution of the notion of inertia in 3 steps:

But what is the pressure in? I would conjecture that it is a low pressure of time. That is, time runs slower near a planet, so all objects want to move where time runs slowest.

So don't think about the standard bowling ball in a trampoline model of warped spacetime. Think more about a weather pressure map where the wind is sucked into the middle. This is what causes objects to fall.

In this image a spinning black hole leads to frame dragging. You can see that it looks exactly like a spinning tornado. 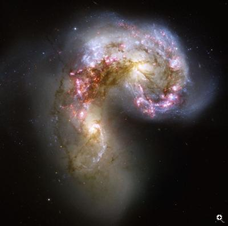 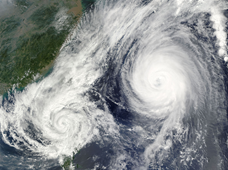 And these two images show merging galaxies, compared with merging typhones. The similarities are striking.

70
How exactly does curved space-time describe the force of gravity?

70
How exactly does curved space-time describe the force of gravity?
0
How does gravity truly work in the bend of spacetime?
5
Intuition for why mass and energy curve the space-time fabric and for why this relationship is linear?
1
Force creates the motion or Motion creates the force?
5
How much of gravity is caused by time dilation?
1
Did the Big Bang cause an outward push of gravity?