How you feel in outer space vs. orbit?

I understand that when someone is in low earth orbit, the "pull" of their inertia is equal to the pull of gravity. However, the force of gravity is still acting on them. However, if they are in outer space there the pull in any direction is miniscule, they should feel different that the way they feel in orbit, because you feel forces on your body and in outer space there is no net force while in orbit there is. Am I correct?

They should feel the same. You only feel forces in orbit if there is something causing sensations, and nothing does in either case. Even on earth, you don't feel the "force" of gravity; you feel the force of the floor pushing you up so that you don't start falling under gravity's influence. In orbit, there is no floor, so you don't feel gravity.

Or you might imagine your left arm feeling a different force than your right, and so feeling pulled apart. But the accelerations they experience in orbit will be the same, so their relative positions won't change, and you won't feel any difference.

(Technically, there might be minuscule differences referred to as tidal forces. These should be measurable by extremely sensitive instruments, but not by humans orbiting anything humans are likely to orbit any time soon.)

The sensation with respect to gravity will be almost identical, to be precise: undetectable by your body. While freely falling (in an earth orbit or towards some other body in deep space) only the gravitational tidal forces could be sensed and these vanish quickly (even faster than the square law) with distance from the planet or other body.

Can you feel the different pull of the earth on your feet versus your head? No. In earth orbit, it's even less tidal force. In deep space even lesser. So for all intents and purposes, you wouldn't be able to tell the difference.

BTW, the Apollo astronauts, on their way to and from the moon, pass a point where the gravitation of earth and moon cancel. They jokingly said that they could feel a bump there to make fun of ignorant news reporters, but in fact that moment is unnoticeable, even though the vehicle changes from a decelerated motion to an accelerated one towards earth.

Remarkably, it is the case that as long as one is freely falling in a uniform gravitational field, one cannot "feel" the difference between an arbitrarily strong field and an arbitrarily weak one; one "feels" weightless in any case.

However, in reality, there are tidal forces (no uniform gravitational fields) which, for extended bodies, tend to stretch one in the radial direction and compress one in the others. 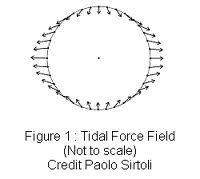 So, for example, if one were in orbit around a compact object such that the tidal forces were significant, one could certainly "feel" the difference between orbital free fall and outer space.

For low-Earth orbit, the tidal forces are there but not significant enough for one to "feel" them.

13
Is gravity a force and if so what is its opposite?
1
Do I need to have a force acting in an opposite direction to feel the force of acceleration?
0
Solidifying understanding of centrifugal force at the equator vs poles
1
How does acceleration feel compared to gravitational pull?
0
Inertia for a large mass (in outer space)
1
Gravitational/centrifugal effects felt in a space elevator
0
Weightlessness during free fall and in free space, are they same?