Frictional force is proportional to the velocity

I came across the following in Goldstein Book:

The frictional force is proportional to the velocity of the particle. Thus its $x$ component has the form $F_{fx}=-k_x v_x$ .

I know the definition of frictional force and velocity, but dont know the meaning of this line. Can anyone explain with an example?

Suppose you give a block an initial velocity $u$ along $x-$axis on such a surface where $\vec{f}=-k\vec{v}$, then magnitude of frictonal force is $f=kv$.

As body moves forward , frictional force opposes it's motion decreasing the speed of body. As speed decreases so does the magnitude of force therefore speed decreases but rate of decrease in speed also decreases.

To get position as a function of time

I'm assuming it is the intuition behind these equations you are looking for? as in why the friction is related to velocity?

let's imagine you have a ball falling down, and look at friction on the "semi" macroscopic level in it's classical/Newtonian understanding. There are air particles in the air which collide with the falling ball restricting it's natural motion. As one can intuitively understand that the higher the velocity, the higher the momentum and thus bigger force because of the collision, so you can see how friction in this setup has a relationship with velocity.

In my limited experience, when analyzing analytically how the speed of the falling ball varies in a fluid of sort, with respect to time it tends to stabilize around a certain value. Depending on how accurate the calculations are required to be, estimations of effects of higher order dependencies would be studied.

Usually when friction is proportional to velocity, it’s due to a liquid, from viscous damping. Examples are shock absorbers, dashpots, and laminar drag forces.

Most people first encounter such friction in SHM, with the classic component in harmonics being the “dashpot”, covered below.

The location $x$ is technically a vector $\vec{x}$, has an $x,~y,$ and in some problems a $z$, component. People don’t always use different notation for vectors (I don’t below). So $v$, $a$ and $F$ are vectors also. The negative sign in $F=-kv$ (and in other terms below) are because the resistance is in the direction opposite to the acceleration, displacement, and velocity respectively.

You may have exercised on machines with pistons, which are in some gyms, designed to increase explosiveness. That’s what friction force proportional to velocity feels like.

Example for Frictional force that proportional to the velocity 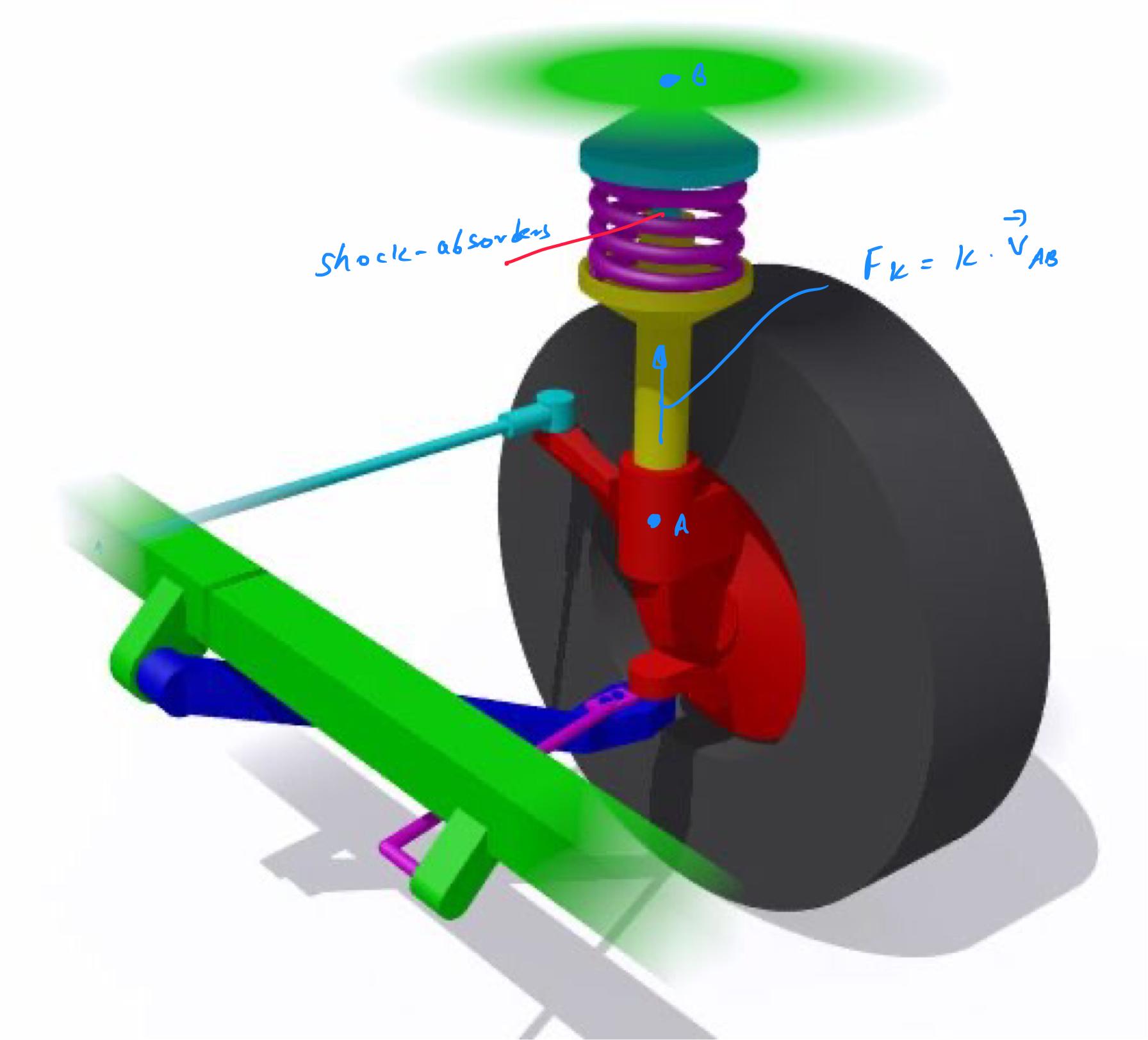 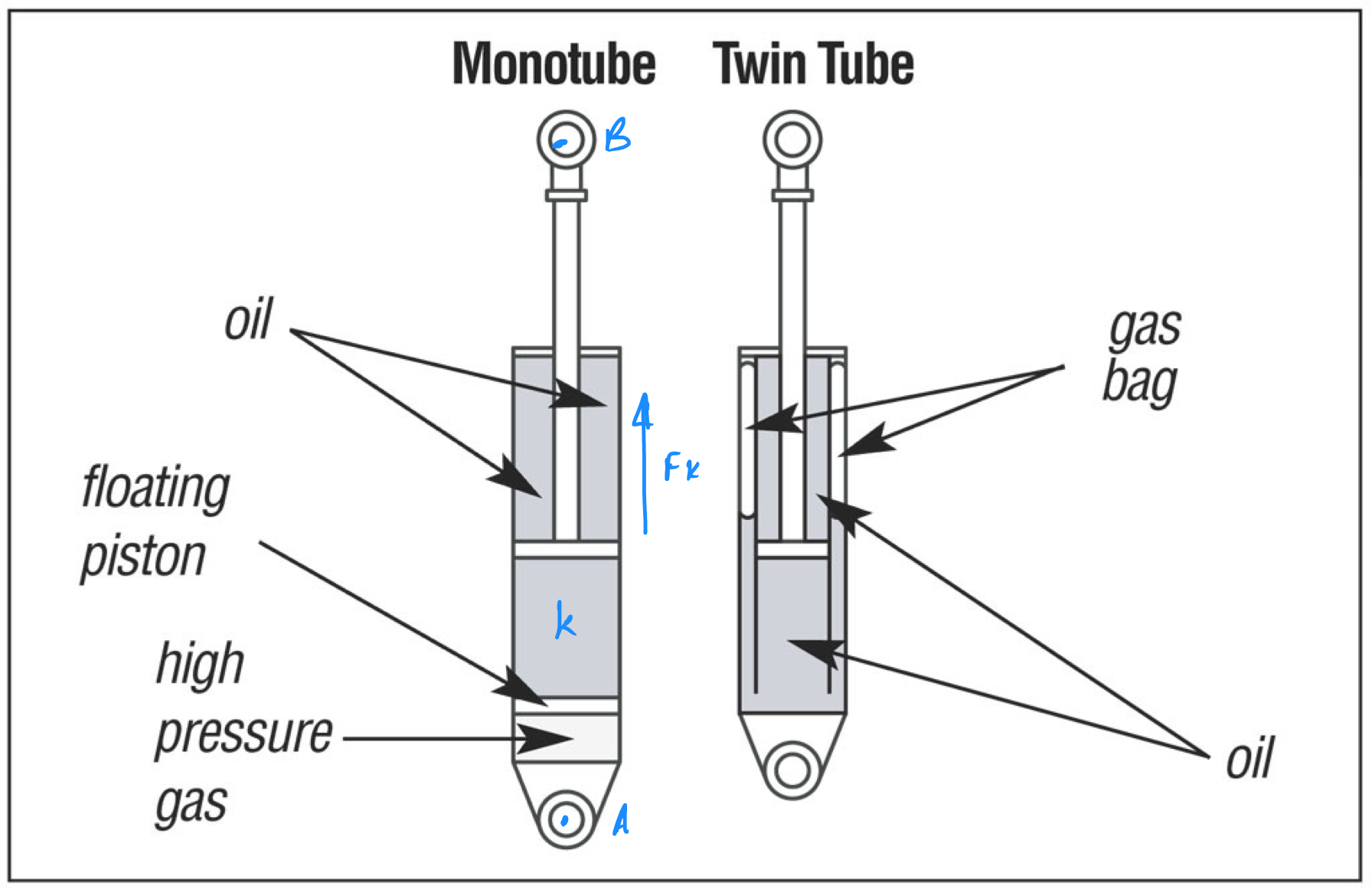 The shock absorbers force is proportional to the relative velocity between Point A and B and the damping coefficient k.

0
Distance traveled by a projectile into a block
1
Resistive force proportional to velocity
1
3D ballistic trajectory with quadratic drag. Calculating position and velocity at time $t$
0
Frictional Force on Plane Increases when Angle Increases?
3
In real life, why is space of states or state-space defined only by position and velocity?
2
Work-energy theorem and the frictional force
3
Force as a function of velocity as $t$ goes to infinity, strange result
0
Proper fully defined notation for angular velocity
4
What is the meaning of external force in the Newtonian force equation?