Do excited electrons drop back to same quantum state?

I'm trying to wrap my head around spectroscopy, therefore, I am looking for as complete an answer as possible here, hence why I have broken the question into a different points.

Here is what I know so far:

Here is what I want to know:

What happens to that photon after it is absorbed/used? Does it become a part of the electron or does it continue on?

The best model of fundamental physics we have, the Standard Model, is a quantum field model. In that context, particles are created and destroyed by the interaction terms at, what is called, a fundamental vertex.

Simply put, the "absorbed" photon ceases to exist; it is destroyed.

Where does the emitted photon come from?

It is created by the interaction of the electron field and the photon field. In QED, the quantum field theory of electrodynamics, there is a basic vertex where, at a spacetime event, electrons, positrons, and photons are created and/or destroyed: 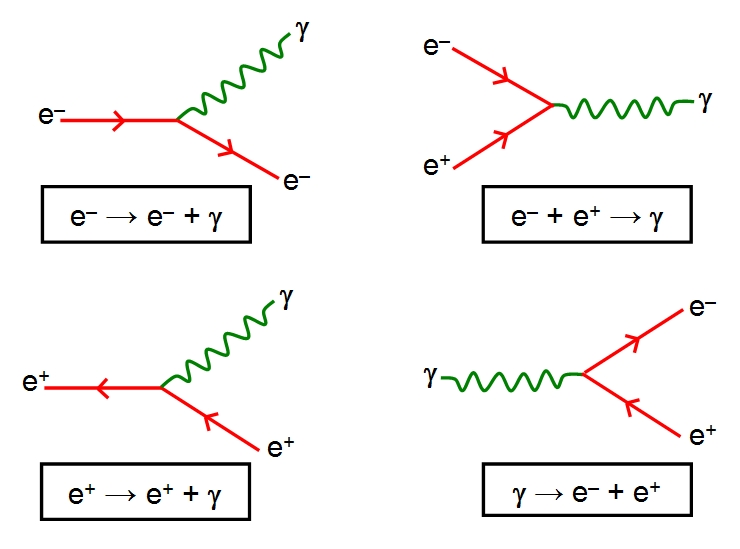 I do realize that this answer is likely to only lead to more head scratching and further questions. Welcome to The Strange Theory of Light and Matter.

All this questions culminate on the same point: You need a quantum theory for the electromagnetic interaction

Why you need this:

2) If you believe in QM, and believe that the energy levels of the atom are true eigenstates of the system, it doesn't make any sense to have them decaying after some time.

So, getting to your questions:

1+3) As far as what I understood of quantum field theory, the photon disappear after being absorbed by the electron. The electron changes it's state, but it doesn't 'change it's nature' by 'incorporating' the photon. So, the photon doesn't become part of the electron in the same sense that a electron 'becomes part of an atom' when it is captured by an ion.

In the case of 'partial absorption', i.e., you have both an incoming and an out-going photon, we say that it excites the atom an then goes on, but I believe that's not your question.

2+3) There is no need to come back to exactly the same level as before, it all depends on which levels are available for it to go to, which since we are talking of spontaneous emission, need to be a level of lower energy.

If the system have a non-zero probability to transition from E2 to E1+photon, you need to calculate what is the amplitude of this transition. You may or may not have transition depending on the case, at least, even having, it may much more dificult to occur than, say, to an E1'. This is due to what is called 'selection rules'.

But you still scratch the back your head and ask 'where the hack this photon comes from???', believe me, I have asked (and still ask) this question myself many times. The physical picture I managed to create is something like this:

2) As a good quantum field, you have 'Heisenberg Uncertainty Principle' to bug you, and what it does is to create a 'zero point EM field fluctuation', which means that you always have a non-zero EM field, it just is small.

3) The electron 'feel' this EM fluctuation, and by doing so suffer an stimulated emission, but since you aren't applying any field by yourself, you call this an Spontaneous Emission, when it is actually stimulated, but by a field that is there all the time.

4) This electron, when 'feels' the EM field, accelerates, and then 'bumps' the EM in return, creating another excitation in return, which we identify as the emitted photon. So, you 'create' the photon in a 'similar' fashion as the way you create a sea or sound wave: you 'bump' on the 'medium' and you give a name to this change on the 'medium'

For all that will point you that you have no 'real medium': I'm trying to pass a classical picture that is inspired on both my work with fluid mechanics and also what I know of Quantum Field Theory (which is not much). Though it is a classical picture, I believe that I have not written nothing grossly wrong, and if I have, please correct me.

Not the answer you're looking for? Browse other questions tagged quantum-mechanics photons electrons spectroscopy or ask your own question.